Pro Tools' MIDI implementation still has a bad reputation, but the reality is now very different.

I've often heard it said that "Pro Tools is no good for MIDI." It's one of those statements that used to be repeated so often that it became a shibboleth, and even when the MIDI functionality of Pro Tools was improved, people still subscribed to this so-called 'fact'.

I'm very aware that there are some MIDI features which Pro Tools doesn't have, and there are some advanced users who will be frustrated at their omission — but I'm equally sure that for an awful lot of people, the MIDI functions available in Pro Tools are more than adequate. Things have changed a lot since I started using Pro Tools back in version 5!

For me there has only ever been one missing MIDI feature serious enough to make me use something else rather than adapt my workflow, and that was a dedicated MIDI editor — which was added in Pro Tools 8, over 10 years ago. It's been possible to edit MIDI from within the Edit window for as long as MIDI has been supported, and it is extremely useful to be able to edit MIDI and audio together on the timeline. However, until the introduction of the MIDI editor it wasn't possible to view multiple MIDI tracks together on the same piano-roll, which could make arranging strings or brass challenging.

The release of Pro Tools 8, back in 2008, not only added new virtual instruments to what had been a very meagre offering of stock instruments (Click? That will show the Logic users what they are missing!) but also introduced a raft of new MIDI features. These have been further refined over the years, and in its current incarnation I find I can do everything I need to do, particularly since the new arrow-based transposition keystrokes were introduced. However, there are still some basic decisions which need to be made first, such as which tool to use for a given job. 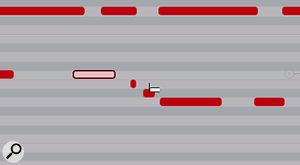 This new and little-known MIDI tool snaps the start of whatever note you click on to the start position of the selected note.Whether you're working in the Edit window or in the dedicated MIDI editor, the choice of which tool to use isn't entirely cut and dried. While it is possible to use the Select, Grab and Trim tools in the same way as when editing audio, most people gravitate towards the Smart tool for audio; and the Smart tool is a good, but not the only, choice when it comes to editing MIDI. Using the Smart tool, you can create notes at the default length and velocity with a double-click, notes can be moved by grabbing from the middle, and when you hover it at either end of a note, the Smart tool becomes a Trim tool in the same way as it does with audio clips. Adding Alt allows duplicate notes to be created, and holding Command (or Ctrl on Windows) introduces the velocity trimmer, which, as the name suggests, allows you to alter velocity by dragging up and down on the note rather than by selecting the velocity stalk in the controller lane. When not held over a note, the Smart tool becomes a crosshair, which can be used to rubber-band groups of notes to select them.

The alternative, and in my opinion the better choice when editing MIDI, is the Pencil tool. This actually offers all of the functionality of the Smart tool, but with a couple of additions and improvements. One feature common to both the Smart and Pencil tools is accessed by holding Ctrl (Mac OS) or Start (Windows). This toggles a new tool which isn't well understood, probably because if you select a note and click on it, nothing happens! It looks like a MIDI piano-roll note with a vertical line, and what it does is snap the start of the note you click on to the beginning of the selected note. This, of course, will have no effect if the note you click on is already selected, since the note will just move to where it already is! Try it with another note selected and you'll get the idea. Add Alt to create a new note at the selected note's position, and add Command (or Ctrl on Windows) to move the end of the note to the selected note start — this is great for creating a legato phrase.

One last feature which is common to both the Smart and Pencil tools is split/consolidate note. Similar to the scissors and glue tools found in other DAWs, the split and consolidate tools can be accessed by holding Ctrl+Shift on a Mac or Start+Shift on a PC. The icons are appropriately medical: a scalpel and a sticking plaster respectively. Because these tools have no specific button in the UI they are often unknown, possibly reinforcing the erroneous opinion that you can't do these basic operations in Pro Tools. You can, but you have to know how.

The Pencil tool offers additional features over those shared with the Smart tool, one of the most obvious of which is to do with note creation. This seems trivial at first: with the Smart tool, a double-click creates a note, but a single click with the Pencil tool chieves the same. (Incidentally, the default note length and velocity are set in the bottom right of the main counter at the top of the Edit window. My preference is to set the default length to Follow Grid, and I've always found the default velocity of 80 a little low, so I set it to 100.) The single click with the Pencil tool becomes more significant when you look at this tool — correctly referred to as the Pencil Tool (Freehand) — in the context of the other Line tools. 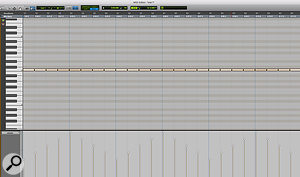 Create a series of notes using the Triangle line tool, as here, and their velocities will be set accordingly!A Line tool, when clicked and dragged horizontally, will create multiple notes of the default length and velocity. The interesting bit starts when you choose one of the other Line tools (not Parabolic and S curve, which are used for tempo operations only and unavailable for MIDI). The Triangle, Random and Square Line tools create multiple notes of the default length, with the shape aspect being applied to velocities and ranging between the default value and 127. This is a quick and fun alternative to using the Change Velocity settings in the Event Operations window, and by using the Velocity Trim tool (hold Command, or Ctrl on a PC), you can scale the velocities back from 127 in a single operation. 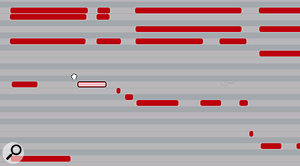 Hold down all the modifiers and the Pencil tool becomes a hand tool for dragging the entire piano-roll around.Other useful Pencil tool functionality includes the ability to temporarily suspend the snapping behaviour of grid mode: just hold Command, or Ctrl on Windows. By adding Ctrl (Mac) or Start (Windows), it can be toggled to an eraser when held over a note, or to a set of crosshairs for rubber-banding when not over a note. My favourite bonus feature of the Pencil tool, though, is found by holding all four modifiers, turning it into a hand tool that allows the piano-roll to be dragged up and down vertically. The hand clenches into a fist when engaged, as shown in the image. I'm not aware of any other way of doing this.

One of the more recent additions to MIDI editing in Pro Tools, and one which has become firmly embedded in my workflow, is a new set of key commands based around the arrow keys. I've used Tab to Transients for a long time to move the edit cursor from note to note, in the same way as I might for audio, but the left and right arrow keys offer an alternative to this that also allows tabbing through CC data points. A really useful enhancement that using the arrow keys enables is accessing notes in chords or drum hits that occur simultaneously. Using Tab will move the insertion point to the set of notes or chords, but won't select anything; it just leaves the insertion point at the note start. Using the right arrow key, by contrast, advances the insertion point to the next note and selects it. When it reaches a chord, it selects the lowest note; another right-arrow press selects the next highest note in the chord; and so on until the highest note is selected. The next arrow you press will then select the lowest note in the next chord.

Using the up/down arrow keys, meanwhile, transposes selected notes up and down by a semitone. Adding Shift transposes them by an octave, and adding Alt creates and transposes a new note. Adding Ctrl (Start on a PC) transposes in the key that is defined in the Key ruler; so adding Ctrl/Start and Alt together opens up the possibility of very quick chord creation, though if you are on a Mac, make sure to turn off your Mission Control shortcuts or windows will start jumping around all over the place. (Actually, you should turn off Mission Control if you're using a Mac for Pro Tools, period.) If you haven't yet tried these arrow shortcuts, give them a go: they are one of the many little ways in which MIDI in Pro Tools has been improved since those pre version-8 days.