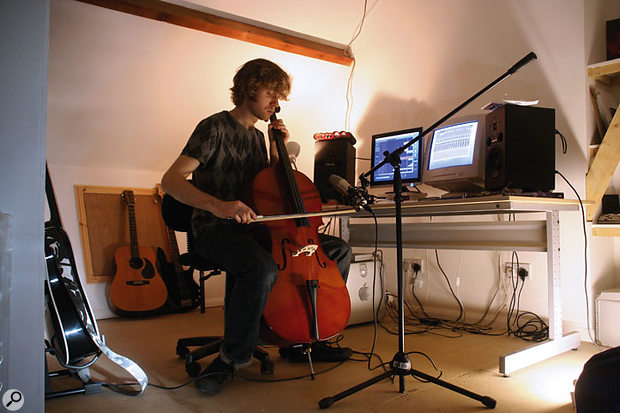 Rescuing and reinforcing a weak-sounding cello are amongst this month's remedies...

This month's project was sent in to us by Adrian Bannister, who goes by the solo artist name of AD when not with his band, Magic8. 'Liar' is a catchy pop tune that Adrian wrote and recorded himself, performed with two strummed acoustic guitar parts, bass guitar, several supporting cello lines and a tambourine in place of the more usual drum kit. The MP3 of the original mix that he sent us had a rather dry, hard sound and I felt it could be sweetened up considerably with just a little basic processing, to make it sound more commercially appealing.

Adrian wrote the song on acoustic guitar and recorded it to a Mac running Logic Pro 7, via a MOTU 896 and a Line 6 Toneport interface. He says he was inspired to some degree by listening to Beck's 'Sea Change', and he made a conscious decision not to use drums, and to use multiple cello parts. 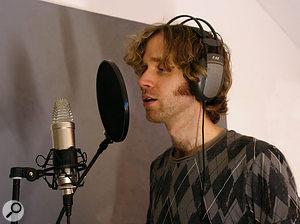 Vocals had been recorded using the same NT1 mic as used for the guitar. He began by laying a guide track to a click, singing and playing acoustic together, then re-did the guitar, recording the DI from his Takamine G-series electro-acoustic and using a Rode NT1 mic positioned just off the sound hole. The bass part was laid down next, using the bass modelling of his Toneport to make it sound a little fuller and lower, before recording the vocals (again, using the Rode NT1), with pitch processing courtesy of Melodyne.

Adrian had initially tried to use a sampled cello in EXS24, but wasn't happy with the sound, so he had decided to buy himself a 'real' cello and attempt, as he put it "to learn how to play it (very basically) in two days. After many hours of cursing and shouting (mainly from my neighbours), I managed to get something close to what I wanted, and tuned and edited it in Melodyne."

He then 'comped' all the best takes, then added panning, EQ and compression to the individual tracks, in an attempt to make them sit better together, with dedicated busses set up for reverb and delay. "Part of the problem I had with the effects," Adrian explained, "was trying to get the right balance between making the mix fuller and ensuring that it didn't become cluttered or messy. I also couldn't get a vocal sound I was happy with, or the cello to sound full enough — so I decided to see if SOS Mix Rescue could help!"

On the initial play-through, I first noticed the hard, brittle-sounding acoustic guitar parts. Despite being well sung, the vocal also sounded as though it needed some sweetening. Fortunately, I was sent this song as a Logic Project, so I could see what processing had been used on the original mix and there were one or two problems there. The Logic Space Designer reverbs in the busses weren't providing the most flattering treatments for the vocals, and the EQ used on the acoustic guitars had made them sound more aggressive than they really were (as the dry audio segment of one acoustic guitar track on the SOS web site demonstrates).

When I listened in more detail to the original tracks, the cello lines seemed to be the most problematic. I don't think Adrian will be offended if I say the cello was probably played with more enthusiasm than experience, but then being brave is often what making distinctive-sounding recordings is about. I don't know anyone else who could do better after playing for only two days — certainly not me! However, there were clearly issues that needed attention. There were some very evident pitching errors, despite the Melodyne tweaking Adrian, and some rather 'scrapey' sounding notes. I could also hear some talking in the background, though this wasn't noticeable at mix levels. 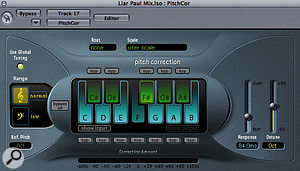 It's not just vocals that can benefit from pitch correction. The cello sound improved considerably with an instance of Logic's Pitch Fix on each part.Each of the cello lines on 'Liar' tended to be a simple three- or four-note motif so, despite the prior use of Melodyne on some of them, I applied an instance of Logic 's Pitch Fix plug-in to each part. This works in a very similar way to Auto-Tune, trying to force the incoming audio to the nearest note in a user-defined scale. I activated only those scale notes that the cello actually played on each particular track and set the tracking time to be slightly faster than I'd normally use for vocals. The result was a big improvement in pitching. At least now the sustained notes on different tracks didn't beat like WW2 bomber engines, though there were still sections that wouldn't stand up to close a scrutiny when heard in isolation. However, the residual detuning gave the cello parts an almost bagpipe-like skirl that worked well under the track.

To warm up the rather hard sound of the cello lines, which I suspect had been close miked, I routed them to a stereo subgroup, panned them to create a wider image, and applied overall compression to the cello mix, rather than to the individual cello parts, as had originally been done. I also placed an Altiverb concert hall reverb in the buss insert slot, to give the close-miked sounds more of a sense of real space. Finally, to soften the sound further, I processed the cello mix via Universal Audio's Dimension D plug-in, to give it a soft, chorus-like effect. If the Dimension D hadn't been available, I'd have tried a gentle multi-voice chorus plug-in as an alternative. 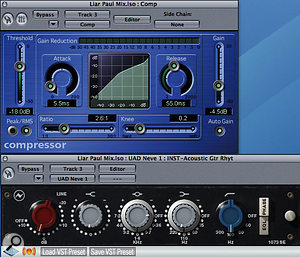 A little goes a long way: gentle compression and a little EQ, to remove the offending nasal frequencies, improved the basic guitar sound, which was then sent to a reverb.This processing had the result of making the sound gel rather better than it had before, but there were still some rough edges that needed disguising. I created a new track and played the main string melody line using string samples, bringing this up just underneath the cellos, to help 'glue' them all together. I thought the combined effect was very plausible and still put over the character of the 'live' bowed cellos.

For the acoustic guitars, I simply used some compression to even them up a bit and then applied a UA Neve EQ plug-in to smooth out some upper-mid harshness. A Space Designer reverb was set up on Send 1 with a Guitar Chamber impulse response loaded, but I trimmed the reverb envelope to play down the early reflections slightly and rolled out some low end to avoid muddying the sound. This gave a rich, strummed sound that supported the track well, especially when the two guitar lines were played together. 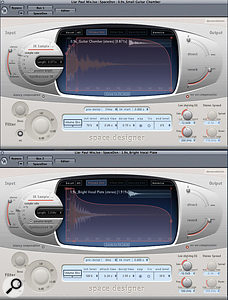 Send effects: note the reduced early reflections for the guitar reverb (top) compared with that for the vocal (bottom). A stereo delay also helped to make the vocal more lush in the chorus.On the main vocal, I tweaked the level automation Adrian had added to smooth out the most obvious level changes, and compressed the track to trim around 4-6dB off the peaks. I then used Noveltech's Vocal Enhancer plug-in to add a bit of mid-range edge to the voice. This particular plug-in is a pre-release version, using the same principles as the Noveltech Character plug-in that comes bundled with TC's Powercore. Despite its simple interface I've found it to be one of the most genuinely useful vocal processing tools I've ever tried, so I really hope they get it into commercial production soon!

For the main vocal reverb, I set up a send channel with Space Designer running a plate impulse response, but I modified the envelope to stress the early reflections and to reduce the reverb tail level slightly. Again, I rolled off some low end. This resulted in a really nice, up-front sound, with bags of character but with little obvious reverb when the vocal was heard in the track. In our solo'd example, the reverb seems very obvious but it comes over as much more subtle when the whole track is playing.

The chorus vocal part ('She thinks he's a liar') I kept on a separate track, as Adrian had done, but I also copied it on to a new track and then shuffled the chorus lines around, so that, when played alongside the original, we'd still hear the same phrases, but always from two different performances. This gave a really nice double-tracked effect, which was further enhanced by adding a little stereo delay, with fairly harsh high and low cut, as well as reverb. This made the vocal lift slightly for the chorus, making it more lush.

"Wow — that sounds so much better balanced, fuller and warmer! I was really impressed after the first listen to Paul's mix, and the strings particularly sounded far more professional than the original. They were generally less abrasive and warmer overall, and the chorus was much fuller, due partly to the double-tracked and panned vocals. A bit of cheating is fine by me with the cellos! I thought they might end up needing to be replaced completely, so I'm happy they worked out well with the pad. I noticed the track was a bit quieter than my mix, probably as I tend to get carried away with heavy limiting. The vocal sound is much improved and sounds far less nasal — and I like the new edit of the second chorus, as it makes the track a little more varied. Thank you Paul!

"I've recently set up a Myspace page to help promote my stuff (www.myspace.com/adiebannister), so please check it out if you have a chance!"

The bass had a very deep sound and covered a wide dynamic range, with some notes being very much louder than others. Some 6:1 compression was applied to even out the level, after which I used Logic 's channel EQ to apply a 24dB/octave roll-off below 50Hz, augmented by a gentle high cut to smooth out the top end. To add more character to the mid-range component of the bass sound, I also boosted a couple of peaks at 340Hz and 2.3kHz. Thus treated, the bass sat nicely under the track giving it some depth but not getting in the way of the other instruments.

A tambourine line was the only percussion part, and I treated this with a bit of the guitar reverb on Send 1, but otherwise I left it exactly as it was.

After balancing the track, I applied some very gentle three-band compression using Logic 's Multipressor at very low ratios (nothing greater than 1.3:1), and followed this up with a TC Brickwall limiter just to catch any peaks. After making a few balance tweaks and trimming away silences in the audio tracks to ensure clean starts and finishes to the sections, the job was done and ready to mix. I didn't go for an over-mastered approach, as I don't believe in exchanging loudness for audio quality, so the limiter only trimmed a dB or two from the loudest peaks.

Hear the Mix Rescue for yourself!

You can check out the 'before' and 'after' audio files of 'Liar' at www.soundonsound.com/sos/jan07/articles/mixrescueaudio_0107.htm.​