More Reason To Be Cheerful 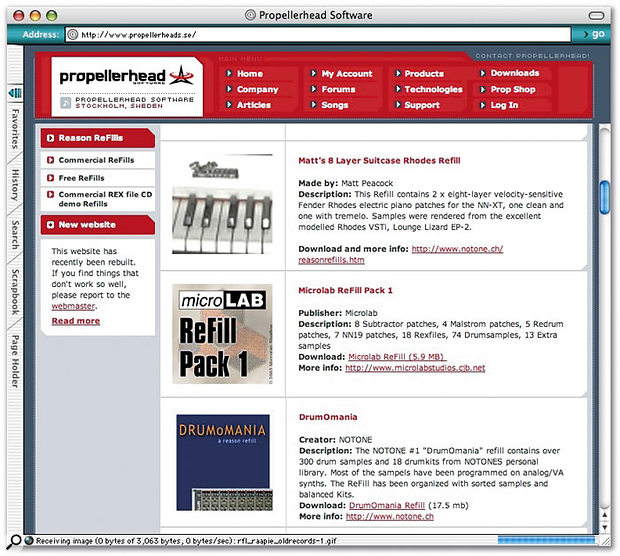 Just a peek at the portion of Propellerhead's web site that's dedicated to Refills.

A new Refill is reviewed and ways around some common Reason problems are offered.

Even though there's no Reason plug-in cottage industry, as there is with other major music apps such as Cubase, one would hardly say that the program suffers from a lack of third-party support. Extra plug-in effects might be out of the question, but users can certainly add extra samples and patches. In fact, the growing number of Reason Refills out there boggles the mind. The selection will continue to grow, too, since any registered user can download the tool necessary for creating Refills — Refill Packer — free from Propellerhead's web site. But there are already so many commercial and free Refills that a newcomer would hardly know where to start.

If you're able to link Reason to another sequencer, you'll be able to do something that's currently not possible with Reason alone: create a tempo track. Sync'ing Reason to another piece of software (or an external hardware sequencer), causes it to follow the tempo map you've created in the other application. (Note that Garage Band, referred to overleaf as a cheap mixer app for Rewiring to Reason, lacks a tempo track.)

One thing to be aware of, though, is that if you've set up tempo-based delays on the DDL1 device, any sudden tempo changes may cause little hiccups as the device tracks the tempo. The delays will go momentarily out of time, or wobble strangely off-pitch as they're re-clocked. You may be able to automate Remix aux sends to minimise the send level at points where you plan to create such a drastic change in tempo, bringing it back up immediately afterwards. This should help reduce the unwanted effect.

A recent visit to Propellerhead's site in search of new sonic material revealed some brilliant news. The two Refills bundled with Reason (the original factory sound set and the Orkester orchestral sound collection that appeared with V2.0), already offering great value, have now been augmented by the so-called Electromechanical Refill.

On offer is a good-sized collection of NNXT advanced sampler patches created from multi-samples of classic electric keyboards. If you've just bought a brand new Reason 2.5 package, you have this already, but it's also available free to existing registered users. Be warned that it's a big download (over 100MB), but if you don't have broadband Internet access you can buy an Electromechanical CD-ROM direct from Propellerhead for the less-than-crippling sum of £7. 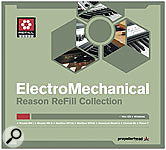 This package is more than worth the download time — or the £7! Indeed, there can be no cheaper way to add the sounds of the supplied instruments to your Reason arsenal. The collection is made up of authentic recreations of a range of desirable electric pianos: Wurlitzer's '60s-vintage valve EP100 and the '80s solid-state EP200, the Fender Rhodes MKI tube and MkII solid state models, Hohner's Pianet T and Clavinet D6, plus a Hammond Model A. The last seems out of place, but one has to remember that this package is essentially free, and if Propellerhead want to give us a particularly historic drawbar organ (it was Hammond's first tonewheel instrument, back in the 1930s), I'm not going to complain! Besides, it sounds so good.

The collection, created on behalf of Propellerhead by SampleTekk of Sweden and New York producer Chris Griffin, features straight patches of all instruments, so that you have access to the typical sound of each. Samples were taken direct from each instrument's main audio output, though the tube-equipped Fender Rhodes MkI was played through a Fender Twin amplifier — which also features tube circuitry. In addition, a Model A layer, introduced by moving your master keyboard's mod wheel, was played through a 1946-vintage Leslie 122 rotating speaker cabinet. Though the basic samples of all these instruments are really high quality, no effort has been wasted in trying to hide artifacts that are part of a particular sound. Thus, hum and pickup noise will be in evidence when you play these patches! If I could make one comment (it can't be a complaint considering the price and playability of the set), it's that the transitions between some keygroups can be a bit obvious, but that's mainly noticeable only when playing individual notes in isolation.

There's some nice layering going on (the Clavinet D6 has eight layers, for example) so that velocity-related tone modifications are reproduced fairly faithfully (the organ, of course, is not velocity sensitive). Mod wheel has also been deployed nicely to add authentic variations where appropriate — the Model A example is particularly noteworthy. The sounds are uniformly playable, especially with the benefits of low-latency audio systems offered by recent computers and operating systems. It's at times like this that I don't regret selling off my hardware synths and samplers! Some of these sounds are historic, if not iconic, and you'll be reminding yourself of performers, songs and soundtracks from Stevie Wonder to the theme from Taxi as you audition each patch.

The basic patches have some simple variations that show off NNXT's processing capabilities, while retaining the character of the original samples. Then there are some seriously tweaked variations that move well past the boundaries of what the originals were capable of and squarely into the field of serious Reason sound mangling. A collection of demo songs is there, if you want a quick taster, but of more interest may be the handy instant multi setups. These are songs that marry an NNXT loaded with one of the Electromechanical patches to a chain of Reason effects. If you like what you hear, it's simplicity to cut and paste the NNXT/effects chain into your own song.

In the end, I don't have to sell this set — and nor do Propellerhead! But if I had to pass over £7, which barely amounts to a handling charge, or even several times that amount, I'd buy Electromechanical immediately.

Techniques that involve importing samples into your Reason song leave you stuck when it comes to altering the tempo of the host song. The ideal way around this involves, unfortunately, spending some more money — though I guarantee that you won't regret the outlay. Propellerhead's Recycle offers a novel approach to slicing up audio to make its tempo and pitch flexible, and its files are, of course, loadable into Reason 's Dr:rex device. If you need more convincing, see the Recycle 2.1 review in this issue, and the June 2004 issue's beat-slicing masterclass, which discusses Recycle amongst a range of similar tools.

What Reason Can't Do... And What You Can Do About It

Reason is a comprehensive virtual music studio, but there are a handful of things it currently is incapable of doing. Top of the list, obviously, is recording audio. However, if you need vocals and real instruments to play alongside your Reason opus, there are a couple of solutions. If your computer's up to running two audio applications at once, the best option will be to use Propellerhead's Rewire protocol to link Reason to a compatible MIDI + Audio sequencer and record the audio into that as it plays along with Reason. Reason 's audio is streamed into the host application's mixer, and the two MIDI transports are linked. For advice on using Rewire with specific applications, check out Propellerhead's web site (www.propellerheads.se).

The main choice of sequencer app would be something like Cubase SX or Pro Tools LE, but if you're a Mac user you might want to take a look at Apple's Garage Band. This is part of the iLife suite, and is either free if you've bought your Mac recently or about 40 quid if you buy it off the shelf. Those are prices I like! 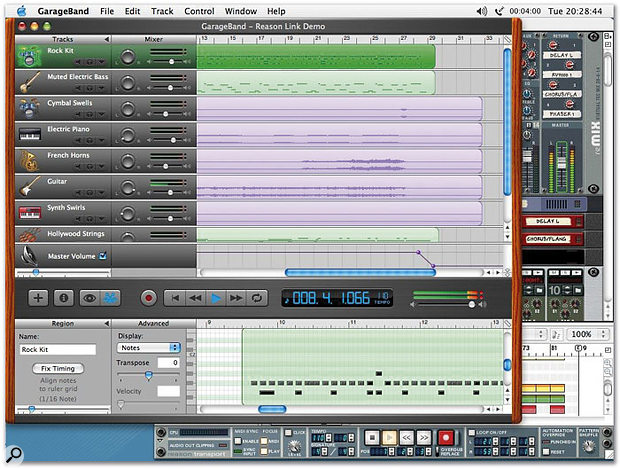 Apple's Garage Band being used as the mixer application for Reason, which can be seen in the background.

Garage Band has Rewire capabilities, and though not sophisticated, they do the job, allowing you to record audio parts alongside Reason 's output and create a mix of the final performance. The compromises are that even though Garage Band behaves as a Rewire 'mixer' application in this setup, it has no mixer channels for Rewired software, so you have to swap between programs to balance levels, and the slave software is unable to access GB 's effects. The other problem is that, in contrast to the way in which Reason is efficiently programmed and succeeds in working on less-than-cutting-edge computers, Garage Band is a bit of a bloater and rather CPU hungry, running happily only on recent Macs. It's a simple application, yet my now (apparently) ageing 450MHz G4 struggles with it, especially with Reason in tow!

If your computer doesn't like running two applications at once, try slaving a simple version of your Reason song (perhaps just a drum track and a guide bass line) to the sequencer. Alternatively, load in sections of Reason song that have been exported as audio (available under the 'File' menu) into an audio track of the sequencer. However you do it, you then record the audio you need into the host sequencer application and export that in evenly-sliced chunks. Import the chunks into a Reason sample player such as NN19 or NNXT and trigger the audio in Reason 's sequencer. Try to cut the audio chunks to a bar or beat so that you'll be able to trigger the resulting sample exactly at the right place within Reason. Then you'll be able to treat the audio with Reason effects and so on.

Rewire is also the path to take to get around the other major thing that Reason can't do, but which many of us wish it would: use VST (or any other format) processing plug-ins. With the new effects devices launched in V2.5 and the ability to process audio with Malström, Reason 's processing capabilities are now pretty strong, but if you really want to use a favourite third-party processor in a track, see the section above: in most implementations, Rewire allows you to stream the signal from individual Reason devices to the mixer tracks of compatible MIDI + Audio sequencers. Garage Band is an exception on this front. An alternative would be, as above, to export audio from Reason, import it into the application that hosts the effect you want, add the treatment, export that, and load the finished result into a Reason sample-playback device. Once again, be careful about start points, keeping to the beginnings of bars or beats, so that everything can be sync'd up easily when the final import process is done.