In part two of our short series, we dive deeper into Neptune, the pitch correction device that keeps on giving. 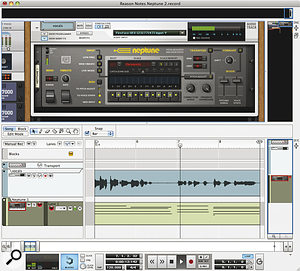 Neptune does much more than pitch correction. Here it's generating harmony parts from a standard single‑line vocal track, according to the notes it's receiving from the Neptune MIDI track.

This month's Reason workshop, just like last month's, is aimed squarely at Record users, and focuses on a device that only appears in that application — the Neptune Pitch Adjuster and Voice Synth. As we discovered last issue, it's a hugely capable Auto-Tune equivalent, ideal for tidying up vocal tracks. But it can do so much more, and has value even if you never work with vocals. Certainly, if you're a Reason user who's never tried Record, now might be a good time to download the demo, available from www.propellerheads.se, and try some of the techniques described below.

To cut a long story short, Neptune can do several things beyond pitch correction. Firstly, it's a voice resynthesizer that can generate fluid harmony parts when you feed it a vocal (or other monophonic line) together with MIDI notes. Secondly, it's a real‑time audio transposer and formant shifter that works a treat with single-line melodies, riffs and so on, and produces fascinating results with polyphonic parts, percussive material and even whole mixes. A bit of lateral thinking opens up even more possibilities, including ADT (automatic double tracking). We'll look at all of these this month. 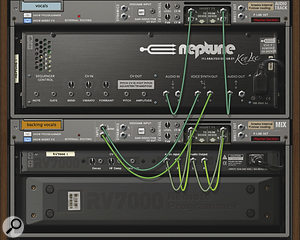 Neptune's separate voice synth outputs allow you to separate out your backing vocal signals for independent treatment. In this example, they're being treated by an RV7000 reverb, and the Mix device gives them a whole mixer channel of their own.

In a pop production, backing vocals can be a lot of hard work. Even if you've got a great grasp of the harmony, you've still got to figure out how that translates into the individual vocal lines and then perform multiple record takes to get them down. Neptune provides another, altogether quicker, alternative. The following directions assume you've already recorded a vocal phrase into an audio track, and set up a playback loop around it so that you can 'session' it.

1. If you haven't done this already, right-click your vocal track's Audio Track device in the rack and choose Create / Neptune Pitch Adjuster. That should also open up the Insert FX area of the device.

2. We need to get MIDI note data to this Neptune, so right-click on an empty part of its front panel and choose 'Create Track for Neptune 1' (or whatever number it happens to be).

3. Record should have already selected and record‑enabled the new Neptune track in the sequencer, so the MIDI input should be live. Check this by playing notes on your controller keyboard and watching for the MIDI Input indicator to light up towards the bottom left of the Neptune front panel.

4. In that same 'MIDI' section of the front panel, click the 'To Voice Synth' box. This ensures Neptune doesn't try to use your MIDI input for pitch-correction purposes.

Now we're good to go. Start playback to hear your vocal phrase, and play chords on your MIDI controller to generate a completely new harmony vocal part based on those notes. The sliders in Neptune's Mixer section control the relative balance of the input signal and harmony parts. It's worth noting, too, that Neptune can perform its voice synthesizer duties in addition to automatic pitch correction of your original vocal — you may even find that the Pitch Adjust button is lit up already if you've been following the steps in this example.

Neptune's Transpose and Formant functions can be used to process anything you feed into it, just like any other effects device.

There are a few extra things to cover before we move on. Firstly, you're going to need to record MIDI notes on the Neptune sequencer track if you want your backing‑vocal harmonies to be a permanent fixture in your song. Just select the track, hit the record button, play your chords again, and you should be away. Secondly, you can use your MIDI controller's pitch‑bend and modulation wheels to introduce some movement into Voice Synth‑generated harmonies, without affecting the main vocal line. Neptune's Bend Range parameter and Vibrato Rate knob let you fine-tune the two effects. Finally, be aware that on Neptune's rear panel there's a separate stereo output for the voice synth. By default it's not used, and the voice synth gets mixed into the main outs. But if you create a new Mix device and hook up those voice synth outputs to it, you suddenly have the capability to mix, EQ and process them completely independently.

If you're a producer of that kind of dance music that sometimes uses very squeaky, transposed vocals, you'll love this bit. Aside from its pitch correction abilities, Neptune can also do real‑time pitch transposition of up to an octave in either direction, and formant shifting too. Applying the effect couldn't be easier: just create a Neptune on an Audio Track device (as in step 1 above) and then enable one or both effects by clicking their buttons at the top right of its front panel. They're not complicated parameters, so experiment away! 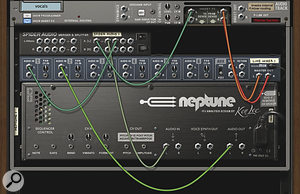 There is a more serious side to this, though. While almost everything about Neptune is optimised for use on vocals, there's nothing to stop you processing other audio with it. For example, both Transpose and Formant functions can make really useful changes to the character of drum and percussion loops. Owners of Reason and Record can have a field day with this. To see what I mean, why not try using Neptune on the output of a Reason instrument like Dr OctoRex, and treat it just as though it were a delay, reverb, or any other sort of effect processor.

For the synthesist and sound designer always looking for the next new thing, try using a Neptune on the output of a synth or sampler playing polyphonic material, or perhaps an entire mix. What you discover is that Neptune's transposition and formant shifting clearly has a strong pitch-recognition element. Playing chords confuses the poor thing, producing strange artifacts on note attacks and decays, but the results can be striking and sometimes very beautiful and effective. Certainly, for anyone who's ever hankered after the instability and unpredictability of certain early analogue synths, here's a modern virtual equivalent! And to push things even further, if you have the Record/Reason combo, you can hook up the CV output of a synth to Neptune's rear‑panel Formant CV input, making the whole effect wobble even more...

A bit of creative thinking opens up a technique that Neptune wasn't primarily designed for: ADT (automatic double tracking). Double tracking of vocals suits many singers and styles, producing a characteristic thickening and loosening effect. However, if your singer finds it hard to be accurate enough, or just isn't around when you decide you want the effect, Neptune can step in.

The idea here is to use a single vocal track, but double it in such a way that one 'half' is heard in its natural state (which may well have a few pitching imperfections) and the other is processed by Neptune's Pitch Adjust section, possibly with a hint of Transpose too. Neptune makes us work a little to achieve this, as it doesn't have a wet/dry mix control, but there are two straightforward ways to do it.

You can literally duplicate your vocal track in the sequencer. Right-click in the track's configuration area, near its icon, mute and solo buttons and so on. Then choose 'Duplicate Tracks and Devices' from the contextual menu that appears. Make sure that only one of the tracks is being processed by a Neptune, and you're away.

Now a Spider Audio Merger and Splitter plus a Line Mixer can be inserted, along with a Neptune, in your audio track. The Spider splits the signal in two: one half directly to channel 1 of the Line Mixer with no processing, and the other half via Neptune and into channel 2. Then the Line Mixer's main outs go to the Audio Track device's Insert returns. The screen to the left shows how this looks in practice.

Regardless of which way you choose to do it, you immediately get a mild ADT effect even if none of Neptune's sections are enabled. Just having it instantiated obviously causes a very slight delay to the signal passing through it. However, a twiddle of the controls can take things further. Enabling Pitch Adjust with a fast‑ish correction speed but a high Preserve Expression level causes a more obvious but still natural-sounding divergence for most vocal parts. I also dial in transposition of around ‑15 cents, sometimes, for a bit of added thickness.