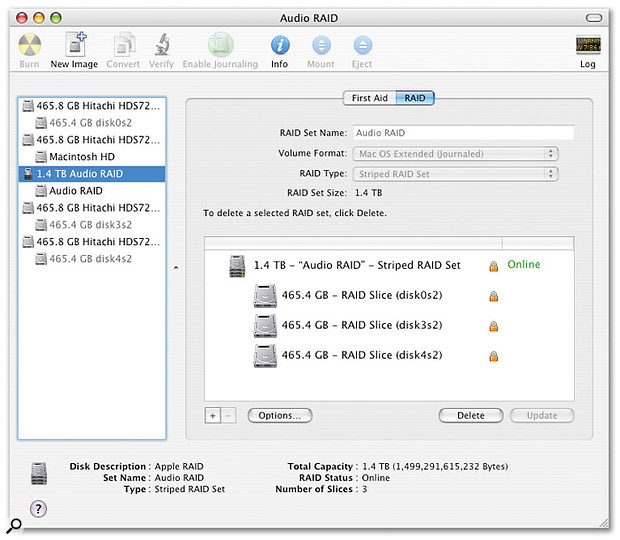 Apple's Disk Utility provides software RAID functionality, allowing multiple drives to be configured as a single volume. Here you can see I have one internal drive as a boot drive and the other three drives in a RAID 0 configuration to test as a volume for audio work.

With the new Mac Pro offering increased internal data storage, we investigate whether using the software RAID functionality built into OS X has any benefits for audio applications.

If you've done any research on the Mac Pro (or have read this month's review, starting on page 124), one thing that might have caught your eye is the fact that, as in the case of the old Power Mac G4, you can install four internal SATA drives in the chassis — and it's easy to swap the internal drives in and out of different Mac Pros. This new storage system is well suited to those who work with large amounts of audio.

One potentially useful aspect of having this much internal storage across multiple drives is that you can take advantage of OS X's RAID functionality to use the multiple drives as a single volume. But what exactly does this mean? And does it offer any benefits for audio performance?

OS X offers two modes of RAID functionality — 0 and 1 — that can be configured in the RAID tab of Disk Utility (Applications / Utilities), as shown in the screenshot above. Simply drag the drives you want to include in the RAID volume into the box in the lower half of the RAID panel, enter a name, check the format for the volume, and choose the RAID Type. Now click Create and the RAID volume will be created.

In a RAID 0 system (aka Striped RAID Set), single items of data are split across all disks in the array, which increases the overall data throughput because you now have multiple drives reading and writing simultaneously. As a simple example, if you have a RAID 0 array with two drives, theoretically it takes half the amount of time to read and write an item of data compared with one drive, because half the data is stored on the first drive and half is stored on the second, and the read or write happens on both drives at the same time.

As a side note, it's worth pointing out that while this software RAID functionality is good to have in the Mac Pro, other workstation manufacturers often provide a hardware-based RAID facility, in the same price range, that supports additional RAID modes. And since Intel also manufacture RAID controllers, this is one area that might be useful to Apple in the future. However, OS X's software RAID does, in fact, work with all Macs and all drives, although you'll get the best results using internal drives or external SATA drives.

To test the Mac Pro's internal storage system, I used Logic Pro with an RME Fireface 800 audio interface to record stereo, 24-bit, 44.1kHz audio files to a single drive. I recorded 12 stereo tracks at a time and then repeated the test, incrementing the number of tracks playing back simultaneously, as I recorded more additional sets of 12 tracks. Recording 12 tracks while playing back 84 tracks was fine, but recording 12 tracks with 96 playing back resulted in the Core Audio error 'Disk is too slow or System Overload'. Scaling back the number of record tracks, it was possible to record six tracks while playing back 96. Finally, the maximum number of playback tracks possible was 101. 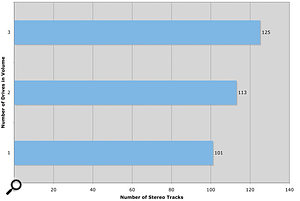 This Mac Pro test chart shows the number of stereo, 44.1kHz/24-bit audio tracks that could be played back simultaneously in Logic Pro, using a single drive, and also with two and three drives in a RAID configuration.In the above test, I was recording and playing back from one drive that was dedicated to audio (ie. not the boot disk), but is this the maximum performance attainable from the Mac Pro's internal storage? What about using the software RAID features we just discussed?

The first thing to remember is that audio software, in general, tends not to benefit from RAID technology in the same way as, say, video. At a recent Apple press event, I saw an impressively large number of HD video streams being played back on a Mac Pro (using the internal volumes in a RAID 0 configuration) that previously would have required a separate storage system such as an Xserve RAID. While HD video files are significantly larger than audio files, it's actually this fact that makes them more suitable for (or, indeed require) RAID storage, because a RAID system is really good at providing a large amount of sustained bandwidth.

The more files you play back simultaneously, the more a hard drive is forced to search for the data, and it doesn't matter how many drives you have connected to a storage system, because the seek time for a system with multiple drives will be no better than it would be for a single drive. And the problem with drive seek times is that they haven't fallen nearly so quickly as storage capacity and bandwidth have increased. With audio you tend to have a large number of small files, whereas video usually entails a small number of large files; so, for the most part, RAID systems are not necessarily a good way to increase performance when it comes to audio.

Over the last year, we've been reviewing Apple's new Intel Macs as they've been released, and guaging their performance by running the usual array of tests with Logic Pro. While we didn't look at the Macbook in great depth, compared to the Macbook Pro, I did get the chance recently to run the Logic tests on a Macbook with a 1.83GHz Core Duo processor, 2GB RAM and Mac OS 10.4.7.

If you compare these results with other Mac systems (take a look at the graphs in this month's Mac Pro review, starting on page 124), you'll see the Macbook isn't too far behind its big brother, the Macbook Pro, in many of the tests. The integrated graphics of the Macbook don't hinder performance quite so much as you might expect, compared to the Macbook Pro with its dedicated graphics hardware, but could be the reason the user interface becomes particularly sluggish when the system is running flat out. On the whole, the Macbook is a pretty good portable system if you're on a budget (though it's worth installing the full 2GB of RAM), and while you can't order the system with a 7200rpm drive, it is at least possible to purchase this later and swap it with the supplied internal drive yourself.

To demonstrate this, I ran the same test again, first with a two-drive RAID 0 configuration, and then with a three-drive RAID 0 configuration. With two drives, I could record 11 tracks while playing back 96, and the maximum number of tracks I could play back was 113. With three drives it was possible to record six tracks with 120 tracks playing back (or record 12 tracks with 108 playing), and the maximum number of playback tracks possible was 125.

While you do see a benefit in performance using a RAIDed volume, you'll notice that the increase is small. You'd get better performance using the drives independently than together in a RAID configuration. I only tried up to three drives, because it's best to keep the system drive separate to the audio RAID, just in case of a drive failure.

As a comparison, I did a test in Pro Tools to see how many tracks I could record and play back simultaneously. With each track in a Session assigned to a different discrete input and output, I could record 111 mono tracks on one drive simultaneously and play back 115. Since Pro Tools isn't compatible with most RAID systems, I didn't bother to repeat the second and third tests.

As a footnote to these tests, I just want to make a couple of final observations: firstly, you'll notice that Logic was able to record and play back far more 'channels' of audio than Pro Tools from a single drive: Logic 's tracks were stereo, whereas Pro Tools ' tracks were mono. Because of this, though, Logic was able to work with interleaved files, which Pro Tools can't do, and with an interleaved file Logic can continue to read the second channel without having to seek to a different location on the hard drive to find the next file. This situation helps to illustrate just how important drive seek times really are.

Secondly, these tests show theoretical maximums because the recording playback files on each track were contiguous regions without edits or crossfades. And, finally, while RAID systems don't provide a huge performance boost for audio work, don't forget that performance isn't the only advantage, and you might consider that recording to a RAID 1 system is a good thing just in terms of reliability. 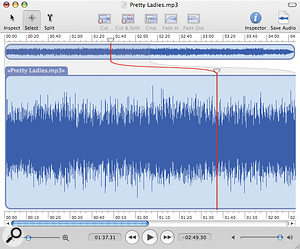 Fission is a new audio editor that lets you work destructively with compressed audio files, without having to recompress them again (resulting in a loss of quality) when you save. Rogue Amoeba, known for their Audio Hijack application, which can record the audio output of an application into an audio file, released a new audio editor this month. Fission 's name is relevant because it has the unique ability to make edits (such as splitting up long recordings into separate, shorter files) directly on compressed audio files such as MP3 and AAC without the user having to convert the audio into raw data and then re-encode the output again.

A test version is available from Rogue Amoeba's web site (www.rogueamoeba.com) and the full version costs just $32, with a $14 discount for users of Audio Hijack Pro.