PCI Express: What Does It Mean For Mac Musicians? Skip to main content

PCI Express: What Does It Mean For Mac Musicians?

With the new single-processor, dual-core Power Macs shipping, we continue to investigate the impact of PCI Express on the Mac audio and music world.

Forget about crocodile wrestling — writing about technology is perhaps one of the most hazardous tasks you can undertake. If being technically accurate isn't hard enough, the fact that technology changes constantly makes the job nigh-on impossible. The ink barely had time to dry on last month's Apple Notes (discussing the introduction of new Power Macs featuring PCI Express expansion slots that would make it impossible to run Pro Tools HD) when Digidesign announced PCI Express versions of their Core and Accel cards required to run the ubiquitous music production system.

According to Digidesign, the company "is now concluding its qualification process of the PCI Express systems with the range of Apple Power Mac G5 computers." The new PCI Express Core and Accel cards are expected to ship before the end of the year (they may be available by the time you're reading this column) and will cost the same as the current PCI models, which will continue to be sold. Digidesign also confirmed that there will be "a crossgrade program for PCI users who wish to switch to a PCI Express solution." One point to bear in mind, though, is that 7.1 will be the first supported version of Pro Tools with the new PCI Express hardware, and while 7.x Sessions aren't compatible with 6.9 directly, it is possible to export them in a compatible format (see our Pro Tools 7 review, page 90, for more).

Since Apple's new Power Macs all have three PCI Express slots, those running an HD3 system will be fine. But what if you use an expansion chassis with a larger HD system? Hold on to your PCI cards, because Digi will also be introducing a new product, the Expansion HD six-slot PCI chassis, at the end of the year. That will be available with either a PCI Express or PCI card to attach to your host computer and can be effectively viewed as a PCI Express to PCI bridge. It will be interesting to see if an upgrade is offered for existing chassis users if the chassis itself isn't compatible with the new PCI Express bridge. 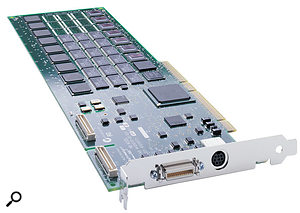 Digidesign will support Apple's move to PCI Express slots by offering PCI Express versions of their Core and Accel cards (the original PCI Accel card is pictured here), plus a new expansion chassis.Whether this new Digidesign chassis will be a re-badged Magma (www.magma.com) device, as with previous Digidesign chassis products, is unclear, but Magma themselves also have a PCI Express to PCI six-slot chassis "coming soon." Interestingly, Magma are going to offer a 'conversion path' between the PCI-to-PCI chassis and the PCI Express model, so this might be of use to existing Pro Tools users who have a chassis already.

What About Everyone Else?

While the number of Mac owners using a Firewire or USB-based audio interface is probably quite large compared to those using PCI offerings, there are some products with certain specifications that are only available as PCI cards, RME's HDSP MADI card being one example. I know many Logic users who use this card with RME's ADI648, to integrate their sequencing and mixing environments, for example, and these are precisely the people who would benefit the most from the increased power of the Power Mac Quad.

I spoke with RME's Matthias Carstens [see also the Audio Interface Manufacturers' Round Table feature in our last issue), who confirmed that "Naturally we will add PCI Express versions of existing products to our line", and expected the first announcements to be made at Frankfurt Musikmesse. "Using the latest FPGAs [Field-Programmable Gate Arrays], we will be able to fully implement all currently known RME features. An example is the HDSP 9652, where the FPGA is completely filled in the current model. This card doesn't have Steady Clock, and also misses phase inversion and the optional +6dB gain in [the] Total Mix [mixer], but the PCI Express version would have these features. We will also make a PCI Express version of the current HDSP PCI card for Digiface and Multiface users, but this card will be function-identical to the existing PCI model, for compatibility."

There are no plans to offer an upgrade program at this time for those wishing to replace their PCI cards with the PCI Express alternative, and Matthias was keen to point out that Apple's announcement had no impact on the company's plans to bring PCI Express products to market. Although RME use FPGAs to implement their products, the reason why other manufacturers haven't specifically announced PCI Express cards could be the fact that there haven't been suitable off-the-shelf PCI Express solutions available, such as a PCI Express to PCI bridge chip, or more complete solutions like Via's Envy24 PCI audio controller chip, which M-Audio use in many of their products.

In October 2005's Apple Notes we looked at the free AU Lab Audio Units host application that Apple include as part of the company's developer tools package, supplied free of charge with every copy of OS X. After reading the article, someone at the studio where I work asked if AU Lab could be used with Cubase, to run Audio Units alongside VST Instruments, and the answer is yes.

One nice thing about AU Lab is that for every Audio Unit Instrument you add, the application will put a virtual MIDI port on your system (for as long as AU Lab is running) that lets you trigger each Instrument from another application. So, for example: 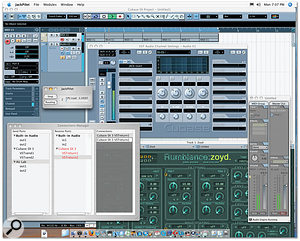 Here you can see an AU Instrument plug-in, running in AU Lab, being triggered from a MIDI track in Cubase. Its audio output is being routed into a Cubase audio track, via Jack and a clever VST plug-in included with the Jack OS X distribution.

So now you can trigger an Audio Unit plug-in from Cubase via MIDI. But wouldn't it be great if there was some way of routing the audio output of the AU Instrument back into the Cubase Mixer instead of going directly to a hardware audio output? You might remember a utility called Jack, which I've written about in previous columns, that can do just what we need. Jack is similar to Rewire in that it's basically a virtual cable for routing audio between applications, but it also supports physical audio hardware and is compatible with any application that makes use of Core Audio.

One really nice thing about the Jack OS X installation is that it installs a special plug-in (in VST and AU formats) that allows you to route the audio output of an application into a plug-in (or the audio output of the plug-in to another application). So by adding Jack-insert as an insert plug-in on our newly created audio track in Cubase, we'll be able to stream AU Lab's output into that track.

That's it — and it should be less complicated to do than to explain. Play the AU Instrument from your MIDI track in Cubase and you should notice hear the audio come back in via the Jack-insert plug-in to the audio track. Pretty neat. And while this example is for AU Lab and Cubase, the technique will work with any application that supports Core Audio in OS X, so there's plenty of room for experimentation.