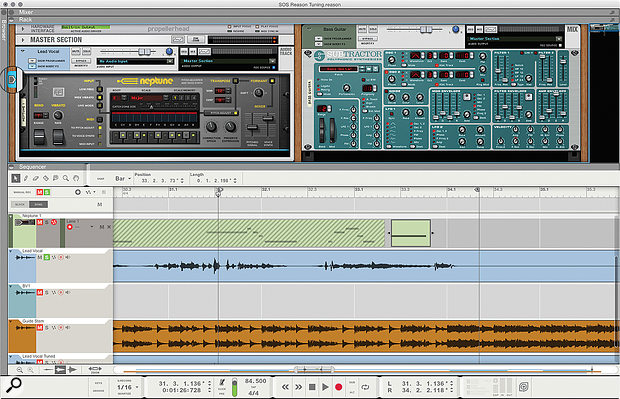 1. Neptune tuning a lead vocal track, with some MIDI guidance.

We look at corrective and creative vocal tuning in Reason.

Reason has all the tools you need to transform ‘sub-optimal’ vocal takes into natural-sounding, pitch-perfect performances; or to add the synthetic hard pitching enamoured by hip-hop at the moment. Basic tuning can be applied directly to clips, and for advanced tuning, pitch processing and effects you can use the Neptune Rack device.

Any audio clip can be transposed directly in the Sequencer. This is the fastest and simplest way to adjust tuning because it doesn’t involve any extra devices or routing. It’s a fairly crude tool, as it changes the whole pitch of an entire clip, but is effective for many remedial pitching tasks, especially if the vocal is mostly good.

To tune audio using this method you need to isolate the note that needs adjustment by separating it into a clip. Use the Razor tool (X key) to cut the original recording around the bum note, taking care to choose the least invasive part of the word or phrase. Then switch back to the regular Selection tool (Q key) and click the new clip.

Next you need to tell Reason what kind of audio is in the track so that it will apply the optimal pitch-shifting algorithm. This is set in a pop-up menu in the track’s header when in expanded view, and can be set to Allround, Melody or Vocal. Choosing Vocal will maintain the formants in the audio and provide the most natural-sounding results for vocals.

Now you can adjust the pitch of the clip using the Transpose setting in the Inspector bar area of the Sequencer (see screen 2). You’ll want to audition this in real time as you make changes, so set up a Loop around the affected section, leaving some vocal on either side for context. The quickest way to do this is to use the Loop Marker shortcuts: Alt-Click to drop the Left Marker; Command/Ctrl-click for the Right Marker.

There are several ways to set the Transpose parameter; for vocal tuning the best is to click and drag up/down in the Cents field (to the right of the decimal place). Change it in smallish steps and listen as there may be a short delay between adjusting the value and hearing the results.

Many situations, such as held notes with wandering pitch, or fast phrases, are impossible to fix with clip transposition. The Neptune device provides real-time automatic tuning with a user interface similar to the Auto Correction mode in Antares Auto-Tune.

When used to correct vocals, Neptune should be added as an Insert Effect to your audio track. For a performance that is generally OK, the default settings are a good starting point and you should hear Neptune tightening up the tuning straight away. As you play through you’ll see the note display in the middle of Neptune’s panel indicating when notes are being shifted.

You now have a number of options for optimising Neptune’s processing in two respects: firstly, making sure that sung notes get adjusted to the right notes, and secondly, trying to make the result as natural, or unprocessed-sounding as possible...

Neptune defaults to chromatic scale mode, meaning that incoming notes will be adjusted to the nearest semitone, with all 12 semitones per octave considered targets. This is fine so long as the singer stayed within half a semitone of all the notes she was trying to hit. However, if she strayed further than that, there’s a chance Neptune will tune some bum notes in the wrong direction. It makes sense to limit the number of notes considered fair game. The easiest way to do this is to tell Neptune what key the song (or section) is in, thus taking a few notes out of play. This is done by setting a root note and scale type from the menus in Neptune’s note area.

If you don’t know the exact key, you can manually set which notes are used in the song by clicking in Neptune’s mini keyboard display. To do this I usually drop a Subtractor synth into the Sequencer, then try to play along with the vocal to find out what notes are there (or should be there!) and then enable those in Neptune. Any changes you make to the scale settings are saved in the current Scale Memory slot, of which there are four to facilitate automation of key changes when tuning a whole song.

2. Simple tuning issues can be fixed by transposing clips.

Unless you’re going for a deliberately processed vocal sound, the second challenge when tuning is to avoid an obviously processed sound. The more the vocal has to be corrected, the more likely it is you’ll get artifacts introduced into the audio. The most important controls are Correction Speed and Preserve Expression, which are much like the all-important Speed and Pitch Tracking controls in Auto-Tune.

Correction Speed sets how quickly Neptune will pull an ‘off’ note towards the correct pitch. There’s a balance between getting a natural glide between the notes, and getting to the note quickly enough that your ear registers it as in tune. With faster singing and shorter notes, you need a quicker Correction Speed to hear the benefit, but if you set it too fast, you’ll start getting the characteristic Cher/T-Pain stepping from note to note. A good strategy is to set the speed to the point where you can hear Neptune working, then back it off a bit.

The Preserve Expression parameter allows you to let natural vibrato through unprocessed. With this turned right down the vibrato will be ‘ironed out’. Again the right setting depends on the material. If the ‘expression’ is less like genuine vibrato and more along the lines of the vocalist drifting in and out during held notes you’ll want to reduce this setting to tighten things up. However, the more strict you are here, the more likely you are to get artificial-sounding results.

In the example I was working through in the pictures, the performance had a lot of fast wide vibrato. In this case I selected the Wide Vibrato option in the Input settings, and had to be quite relaxed with the Preserve Expression and Speed settings to avoid obvious and glitchy pitch processing.

Sometimes you want to tell Neptune very specifically which note a part of the audio should be corrected to, and when. You can do this by sending MIDI notes to Neptune. To the left of the scale a MIDI mode selector lets you direct incoming MIDI to either Pitch Adjustment or the Voice Synth — in this case you’ll want the first.

In order to route MIDI to Neptune, select it in the Rack, then click the MIDI Target tab on the left-hand wood strip (magnified in the main screenshot). As well as routing your MIDI controller to Neptune, this will automatically create a MIDI track for it where you can record or add notes. During playback you’ll now be able to select in real time the notes that Neptune will attempt to tune incoming audio to. I’ll leave you to have a few minutes enjoying how gloriously fun this is before we put this to practical use!

In the screenshot I’ve played and recorded the lead vocal melody line into Neptune in time with the vocal. I actually recorded it into my Subtractor synth track (the one I used earlier to figure out the key), then copied the MIDI to the Neptune track. At this point this is going to sound weird (or cool) but we’re not going to leave it like this. In the section shown there’s a bad note after a long glide from another note. I trimmed the MIDI event for that note, so that the pitch-correction came in after the glide, then disabled all notes in Neptune so tuning only occurred when MIDI was present. This method of working mimics the way I work with Auto-Tune’s graphical mode in other DAWs.

As you’ll have guessed it’s often not possible to find one ideal Neptune setting for a whole song. While backing vocals may be fine with an overall treatment, for a lead vocal I nearly always apply tuning line by line with different settings to get the best results. There are two ways to approach this in Reason: use automation and/or MIDI input so that Neptune’s settings change throughout the track, or work on one section at a time and bounce the audio down. I use the latter approach, but as this gets us into internal bussing and audio comp editing — and we’re out of space — let’s save this for next time when we can look at it properly.

Tuning effects have come a long way since Cher warbled “I believe”, and they’re still being used all over the place, especially on sung vocals in hip-hop. These effects vary from over-the-top hard tuning, to a subtle synthetic gloss (eg. Drake). Neptune can do all of these. Both Pitch Adjust and Voice Synth modes controlled by MIDI can produce vocoder-like effects, but they’re more subtle as derived purely from the original sound. I’ve also heard a number of producers having fun with formant shifting to create a deeper, darker vocal. MIDI-controlled pitch is also amazing for remixes as it can easily change the melody and key of the original song, as well as generating harmonies.