We delve into the mysteries of envelope following in Ableton Live.

An envelope follower lurks under the hood of each of Live’s dynamics processors. It detects the audio level on which the rest of the circuits base their compressing, limiting or gating action. This month we’ll look at a variety of applications for envelope followers beyond controlling dynamics. I’ll start with a quick look at other Live effects that incorporate an envelope follower and then discuss several ways to use the stand–alone envelope followers available as Max For Live devices.

Live’s Auto Filter, Dynamic Tube, Flanger and Phaser have built–in envelope followers (boxed in red) to control a single parameter. Auto Filter’s implementation is the most versatile in that it allows for side–chain input to the envelope follower. Here Auto Filter is set up for a variant of ducking: kick–drum hits momentarily raise the cutoff of a high–pass filter applied to the bass track to get it out of the way of the kick.

Take It To The Max

If you have Max For Live, which is included in Live Session, you’ll find two envelope followers in the Max For Live/Max Audio Effect section of Live’s Category browser: ‘Envelope Follower’ and ‘Max Api CtrlEnvFol’. A third alternative, ’REF’ ( 5 from k-devices.com), offers better graphics and advanced features (most notably a threshold control). Although their feature sets differ, each of these envelope followers works in the same way: you insert it as an audio effect device on the track playing the audio whose amplitude envelope you want to follow, and then you map the envelope follower’s output, which is a control signal, to the parameter you want to control. Although you insert it as an audio effect, the envelope follower has no effect on audio; the track on which it is inserted plays normally. An option to keep in mind is that you can insert an envelope follower on a Return track and thereby use it to follow the mix of the audio and instrument tracks sent to it (you’ll want to mute the Return track if you use this strategy). Follow these steps for a graphic look at how Envelope Follower works:

As alternatives to modulating the Send level to Simple Delay you could modulate the Return track’s Track Volume slider, or you could move Simple Delay to the Guitar track as an insert effect and modulate its Dry/Wet knob. With both alternatives, Simple Delay will receive and process the full guitar loop rather than only the parts allowed through by the gyrations of the Send knob. Envelope Follower’s action will then modulate Simple Delay’s output; the amount of delay that is heard. The results are not as dramatic, but may be just what you want. 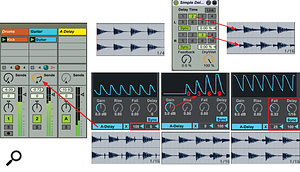 The Instrument rack on the left holds piano and pad instruments in separate chains, and its Chain Selector is used to fade in the pad. The REF envelope follower on the right targets the Chain Selector (orange outline), and its Threshold is set so that no envelope occurs at lower volumes (yellow outline). REF’s Attack is set to smooth the onset of the pad (green outline).So far I’ve focused on effects processors, but instrument controls make equally good targets. One such application is fading instruments in and out, and if you have an Instrument rack holding different instruments, targeting the rack’s Chain Selector is one way to go about it. Another way is to use Live’s Crossfader to crossfade between instruments on separate tracks. To target the Crossfader, you’ll need to use Max Api CtrlEnvFol because it’s the only envelope follower that lets you select the target by menu, and that is the only way the Crossfader is accessible.

When One Is Not Enough

One feature none of these envelope followers offers is the ability to control more than one parameter. There are two workarounds for this. The most obvious is to use a separate envelope follower for each parameter you want to control. Because they pass audio through unaffected, you can arrange the envelope followers in series in the path of the audio whose level you want to follow, and that lets you see and edit them all at the same time. You’ll save lots of time dialing in the envelope followers’ settings if you enclose them all in a Group and then link their common controls using Macro knobs. On the other hand, you’ll want to avoid linking controls such as Min and Max for which you’ll probably want individual settings.