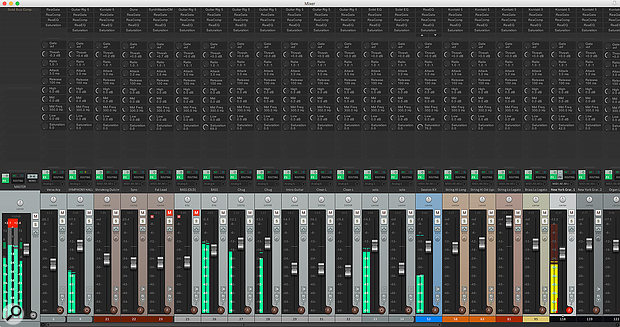 Effects controls duplicated across every channel to provide a mixing console-style view of a project.

Getting ‘granular’ with your plug-in parameters is great for really detailed work, but sometimes you want the opposite: to see your whole (virtual) mixing desk laid out in front of you. Unlike some other DAWs, Reaper doesn’t feature a default console-style view for your plug-ins, but it’s actually quite easy to roll your own. In fact, Reaper allows you to show your choice of effects parameter knobs from any combination of plug-ins in each mixer channel.

To illustrate this, let’s go through the process of building a classic channel strip layout, comprising a gate, basic compression controls, and a three-band semi-parametric EQ. We’ll also throw in a single-knob saturation control to top it off. For this exercise, and to allow people to play along at home, I’ll stick to Reaper’s bundled plug-ins, but you can use third-party ones too.

Let’s create a new track and set up the plug-ins we’d like. Starting with a blank project, hit Cmd-T (for Mac; it’s Ctrl-T in Windows) to instantiate a new track, then hit the ‘FX’ button on the track’s control panel to bring up its effects window. Click on ‘Add’ to bring up the ‘Add FX’ window, choose VST:ReaGate from the list, and hit OK. Repeat the process to bring in VST:ReaComp, VST:ReaEQ and, finally, JS:Saturation. You’ll end up with something similar to what’s show opposite. Close the effects window. 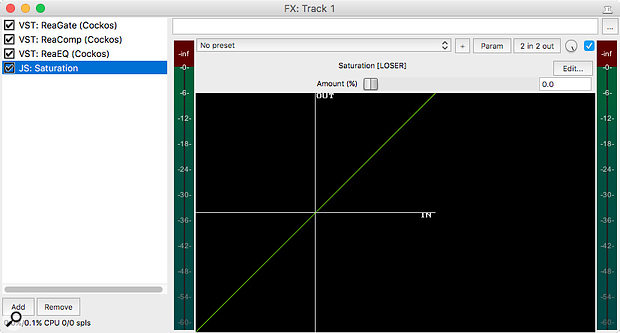 Now, turn your attention to the mixer. If the mixer window is not already visible, hit Cmd-M (Mac) or Ctrl-M (PC) to bring it up. From the Mixer menu untick ‘Dock mixer in docker’, and maximise the mixer so it fills the screen. Then select ‘show FX parameters when size permits’. Several greyed-out knob controls will appear on your mixer strip — this is where your channel-strip controls will reside.

Right-click in one of the mixer strip’s empty knob slots and, from the pop-up menu, select ‘VST:ReaGate (Cockos) -> Thresh’. This should populate the top slot with a knob marked ‘Thresh’, which is linked to the ReaGate plug-in on that channel. Next, we’ll assign compression controls. Again, right-click in the empty area. Select ‘VST:ReaComp (Cockos) -> Thresh’ to create a knob that’s assigned to the compressor’s threshold control. Work your way through, adding all the parameters you want to be able to control from the mixer.

For this exercise, I’d suggest including the following parameters in addition to the two that we’ve already assigned:

The left channel’s knobs have default labels, taken from the plug-in parameters to which they’re assigned. The right channel has more meaningful user-defined labels.As you add more controllers, you may find that they exceed the space available in the mixer strip, in which case some little up/down scroll buttons will appear. You can (at the expense of sends or inserts, or even by reducing the fader length) click and drag on the dividers between mixer sections to free up more display space.

Once you’re done, you should end up with a mixer strip that looks something like the second image. This is already broadly functional, but the default labelling of controls leaves something to be desired! You have two knobs marked ‘Thresh’, some of the labels are wider than the strip, and there’s no clue as to what the ‘Amount’ knob does. Reaper’s ‘controller aliasing’ can be used to tidy up the control labels. Right-click on the top ‘Thresh’ control, then select ‘Alias: VST:ReaGate (Cockos): Thresh’. A pop-up window should prompt you to enter a new parameter name. Keep it short and identifiable — we’ll use ‘Gate’ for now.

Work through, creating an alias for any parameters you wish. The compression controls are fairly self-explanatory, but the EQ needs some clarification. Right-click on ‘Gain-High Shelf’, select ‘Alias: VST:ReaEQ (Cockos): Gain-High Shelf’ and rename it ‘High’, and continue down the strip. I replaced ‘Gain-Band 2’ with ‘Mid’, ‘Freq-Band 2’ with ‘Mid Freq’, ‘Gain-Low Shelf’ with ‘Low’ and ‘Amount (%)’ with ‘Saturation’. .

You should now have good ‘big-picture’ control of your plug-ins from the mixer. If you need to drill down to a greater level of control, double-clicking any knob will open up the associated effects window, where you can tweak any parameters as usual.

Once you’re happy with your chain and controller layout, you’ll likely want to save it for use in other projects. To do this, save it as an FX Chain: open up the track effects window, right-click in the effects list and select ‘FX Chains -> Save all FX as chain’. A save dialogue box will appear, where you name your chain and then hit Save. An effects chain stores the plug-in instances, parameters, order, and the mixer control assignments. 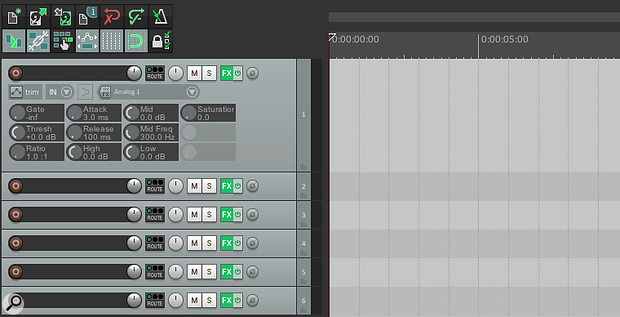 To demonstrate this, create a new track in the project and bring up the track effects window, then right-click the empty effects list, select ‘FX Chains -> Load FX Chain’ and choose ‘SOS Channel Strip.RfxChain’. Your blank track will be populated with the same plug-ins and knobs as your original track. If you have the free SWS/S&M Extension (www.sws-extension.org) you’ll also find custom actions for copying and pasting effects chains across multiple tracks. And for more on custom actions, check out Reaper Notes from SOS March 2016.

If you love your new mixer layout so much you want to use it all the time, you can also choose to assign it as the default for new tracks. From the track effects window, right-click on the track list and select ‘FX Chains -> Save all FX as default chain for new tracks’. Any newly instantiated track will now come pre-loaded with your plug-in chain and controller assignments.

Hopefully, all is well... but there can be a few niggles and drawbacks. A little more control over the aesthetic of the knob layout would be very handy — things like on/off toggles, spacers and colour customisation would allow for much more ergonomic controller layouts. And while it’s nice that the knob layout reflects the signal chain, it would be useful to be able to re-order the knobs according to preference. Another minor quibble is that if you flick back to Reaper’s main arrange view and zoom in vertically to a track, you’ll notice that the effects controls are also visible in the track control panel. This can be very useful, but the presentation is a little untidy and there’s no way to turn it off while leaving the mixer controls intact. Thankfully, in reality I very seldom zoom in quite enough for this to cause me problems.

There are a few extra tricks to try. You can assign controls from any plug-in you like, and there’s nothing to say you must use the same ones for every track — you could set up identical controller layouts with specific plug-ins appropriate to that track. For instance, you might use ReaComp as your go-to compressor on most channels but replace it with a more characterful compressor on certain tracks, and keep the control interface consistent on all those channels.

You may also want to explore mapping the effects controls to external MIDI controllers. This is trivially simple: from the mixer, right-click on the knob you wish to assign, select ‘Learn’ and move the MIDI controller you want to assign. I’ve had great success using eight rotary encoders mapped to EQ and compression settings to instantly tweak parameters on the selected track.