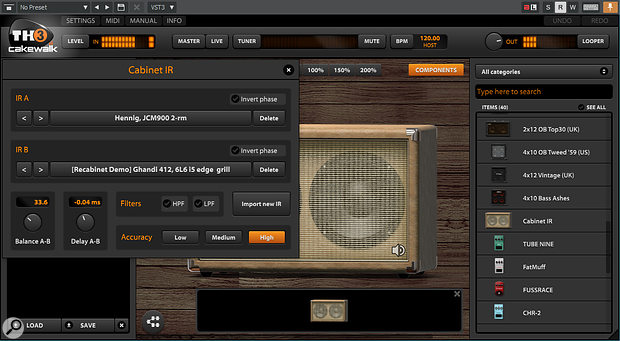 The Cabinet IR’s Properties page is where you manage and import IRs, as well as vary selected parameters.

Get creative with Sonar’s cabinet convolution processor in TH3.

Sonar’s 2016.06 update consolidated Overloud’s various TH2 amp sim editions that worked with different versions of Sonar into a single processor, TH3 Cakewalk Edition (TH3CE for short). But this wasn’t the only change; in addition to the transition from VST2 to VST3, and improved modelling, TH3CE now includes several impulses you can load into the Cabinet IR module. The previous TH2 versions came with no impulse responses, other than four provided by Cakewalk. (Note: The 2017.05 update made a few changes in TH3. If you have Sonar Artist or Professional, updating the core program also updates TH3. Sonar Platinum owners need to update the Boutique FX Suite to make these changes to TH3.)

Impulse responses are essentially ‘samples’ — not so much of sounds, but of environments, like rooms and other acoustic spaces, guitar bodies or, in the case of TH3, speaker cabinets. This is quite different from cabinet algorithms that model a speaker cabinet; an impulse-based cabinet won’t be as flexible as an algorithm-based cabinet because, like samples, they’re basically ‘freeze-dried’. For example, with an algorithm, you can model using different mics, whereas impulses capture the sound of the amp recorded through a specific mic. However, when done properly (and creating impulse responses is definitely both an art and a science) the results can be very realistic and convincing.

Next, click on ‘Import New IR’ and create a group for the IRs you want to import (I called the group ‘Cakewalk’ so it would have the same name as the original folder for TH2). Navigate to the location of the IRs you want to import; with TH2, it’s C:\Users\[your user name]\AppData\Roaming\Overloud\TH2\IR. Open the Cakewalk folder, and select the impulses. To select them all, click on the first one, and Shift-click on the last one. Now click OK.

This doesn’t load IRs into TH3 directly, but makes them available along with all the other IRs. Click on the IR field, then navigate to the IR to load it.

There are several sites that sell impulses — just ‘ask the Internet’. However, you can also find demo versions and even free impulses. For example, Gregor Hennig offers lots of free guitar amp impulses at http://www.grgr.de/IR. Just be aware that the quality of commercial IRs can vary as much as the quality of sampled sounds; fortunately, there are often demo sound recordings so you can make a more informed buying decision.

Although you can always be ‘normal’ and stick to cab impulses for TH3, you can also use any WAV file as an impulse by navigating to it and importing it, as described above. Importing converts the WAV suffix to IR. There’s a limit on how long the file can be, but nothing horrible happens if you load a long file (other than only a short snippet of it gets used as the impulse).

However, the result of using non-impulse samples is not easy to predict — some sound horrible, whereas some can be very useful (for example, I’ve found some snares with reverb one-shots that are pretty cool). The way I test samples as impulses is to create a new IR group in TH3, navigate to a folder containing one-shot samples, and use the click and Shift-click option to import dozens of samples at a time. Next, navigate to the folder containing the imported samples, then audition these with the left/right arrows in TH3’s IR field. Note that the left/right arrows don’t recognise folder boundaries, so you can transition from the impulses in one folder to the impulses in another folder seamlessly.

Most of the impulses will probably not be too useful, but every now and then you’ll run into a winner. After auditioning them all, erase the ones you don’t need. Although you can delete impulses one at a time within TH3, if you loaded a lot of impulses, that can be time-consuming. You’re better off going to the C:\Users\[your name]\AppData\Roaming\Overloud\TH3\IR folder, and doing a mass delete of what you don’t need. The next time you open TH3, the deleted impulses will no longer appear as available.

One of my favourite techniques for rhythmic-oriented dance music is something I call ‘drumcoding’, where a vocoder uses guitar chords as the carrier, and drums as the modulator. Combining the drumcoded sound with dry drums produces pulsing, melodic drums. You can obtain the same effect with TH3 by loading a sampled guitar chord as an IR, then feeding a drum track into TH3.

The main disadvantage compared to a vocoder is that you can’t change the IR in real time to follow a chord progression. However, note the Balance A-B control, which can crossfade between two IRs. This at least lets you alternate between two chords, or alternate between dry drums (if no impulse is loaded into one of the IR slots) and ‘drumcoded’ drums, which brings us to the next topic...

The Balance A-B, Delay A-B, Accuracy, Filters, and Invert Phase controls all respond to MIDI control. You can do MIDI Learn, or draw curves in Sonar’s automation lanes. However, I highly recommend using MIDI Learn and changing parameter values with an external controller, or using VST automation and enabling Write, because TH3 has approximately a bazillion automatable parameters. If you absolutely must find the Cabinet IR parameters in the track’s TH3 automation menu, call up the menu and type ‘c’ repeatedly. Eventually you’ll get to the Cabinet IR parameters. 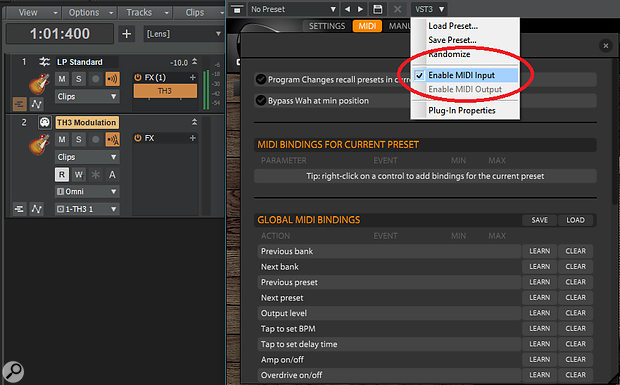 To control TH3 via MIDI, in the plug-in header’s VST3 options drop-down menu, choose Enable MIDI Input. Then you can create a MIDI track to generate controllers, and select TH3 as the output destination.

As to what’s worth automating, Balance A-B is a good option for several reasons. In addition to the ‘drumcoding’ technique mentioned above, it’s easy to change cabs during the course of a song to add different shadings to a guitar’s tone.

Accuracy is also useful for automation, because it affects the sound. High accuracy is like adding more bands to a filter bank — the filtering is more nuanced, and has more of a sense of pitch. As you lower the accuracy, the filtering effect becomes broader. So with the ‘drumcoding’ example, High accuracy settings give the most pitched sound, while Low imparts very little sense of pitch. 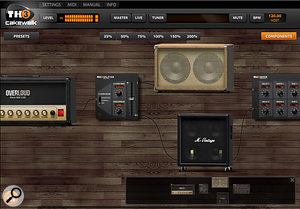 Placing a conventional amp model in parallel with an impulse-based one multiplies your cabinet — and sound effects — options exponentially.Delay A-B is another interesting control. If you load the same impulse into A and B, and set Balance A-B to the middle position, then varying Delay A-B gives a flanging effect — and with Invert Phase enabled on one of the IRs, there’s true, through-zero flanging where the signal totally cancels at the 0 delay setting. In fact, the cancellation is so complete you might want to offset Balance A-B somewhat so there’s at least a little bit of signal with Delay A-B centred.

One of TH3’s welcome features is the ability to split the input into two parallel paths, so you can combine a modelled cabinet with a cabinet IR. When you’re using impulses to provide goofy sound design effects, the modelled cabinet can be the dominant sound, with the cabinet IR mixed in subtly. For example, if you want a bright sound from a humbucker, load a cymbal sample into the cabinet IR to give a super-bright, metallic type of timbre, then layer that with a regular cabinet sound.

Although TH3 is designed with guitar and bass in mind, it can do a lot more than just provide amp and cabinet sounds — try out the Cabinet IR, load some IR and WAV files, and find out for yourself!