Our very first Reaper workshop explains how to use band-splitting to create your own multi‑band processors.

Welcome to the inaugural edition of our Reaper workshop, our new column dedicated to Cockos Inc's extraordinarily flexible audio and MIDI sequencer. Its rapid emergence as a force to be reckoned with in the software DAW market owes much to the developers' iconoclastic approach to traditional sequencer design and their 'little and often' update strategy.

The first stop for new users should be the program's regularly updated user guide and the Reaper Wiki, created by the sequencer's active user‑base. Good as these resources are, there's little point in just regurgitating them, so this column will try to further explore the real‑world applications of Reaper's feature set.

To get the ball rolling, I want to illustrate how you might take advantage of one of Reaper's calling‑card features: track channels. While most sequencers have specialised tracks dedicated to mono, stereo and surround playback functions, there is only one type of track in Reaper and the user is left to decide how many internal audio and/or MIDI streams (called track channels) it carries simultaneously. The big deal is that you can have a ridiculous 64 track channels per track, if you want, with free routing between any of them and the I/O of any inserted effect plug‑in. This enables you to construct custom processing setups as a modular matrix within a single track, and this kind of processing power is one of the main attractions of Reaper for me. Let's look at something fairly simple you can do with it: splitting an audio signal into frequency bands. 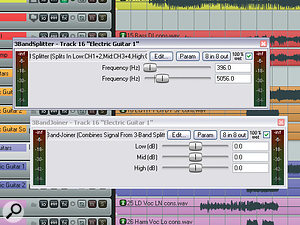 Reaper's built-in 3BandSplitter and 3BandJoiner plug‑ins open the door to all sorts of multi-band processing options.

There are lots of situations where frequency‑selective processing is handy, particularly in dynamics processing. Creating your own multi‑band processors offers much more flexibility than typical 'one‑stop shop' plug‑ins and it's easy to do within a single track in Reaper using track channels.

What you need is a pair of Reaper's bundled Jesusonic plug‑ins: 3BandSplitter and 3BandJoiner. The first takes a stereo signal on track channels 1/2 and splits it into three frequency bands, feeding low, middle and high ranges to track channels 1/2, 3/4 and 5/6 respectively. The second does the opposite, combining the six track channels back to a stereo pair.

You're now free to insert other plug‑ins between the 3BandSplitter and 3BandJoiner plug‑ins, to process each frequency region independently, adjusting the 3BandSplitter's crossover frequency sliders as necessary. Setting up multi‑band compression, for example, is a doddle using three instances of Reaper's built‑in ReaComp. Just open the routing window of each instance, remove all the default routing assignments and connect the stereo main inputs and compressor outputs to the appropriate track channels: 1/2 for the low band, 3/4 for the mid‑band and 5/6 for the high band. While you're at it, rename each instance (highlight it and press F2) to remind yourself which is which.

Comparing this custom‑made modular setup to ReaXcomp, you can already see extra processing facilities in the former setup, such as individual look‑ahead (via the Pre‑Comp slider) and wet/dry balance facilities per band. Plus you can swap out ReaComp for other compressors if you prefer their sound. A Teletronix LA2A on the low end, a Neve 33609 on the mid‑range and a Urei 1176 on the highs? Suits you, sir!

Be aware, though, that while Reaper has excellent plug‑in delay compensation to avoid timing problems in setups like these, some plug‑ins alter the phase response of the audio they process, and this can cause undesirable tonal anomalies because of phase cancellation as the frequency bands are summed together.

ReaComp and some third‑party plug‑ins allow side‑chain triggering, too, where most multi‑band processors (including ReaXcomp) don't, and this opens up a number of powerful automated mixing functions. Imagine that an overdriven electric guitar part is obscuring the important high frequencies of the lead vocals. If you frequency‑split the guitar track and compress track channels 5/6 in response to the vocal level, you can automatically reduce (or 'duck') the problem frequencies whenever the singer's voice is present. To implement this:

You should now have audio going to all the right places. All you need to do is adjust the ReaComps to get a suitable degree of gain reduction. Just remember to set the plug‑in's detector input to auxiliary input L+R, otherwise it won't respond to the external side‑chain.

There are many other ways to use a band‑splitting setup, besides multi‑band compression. A favourite configuration of mine uses the Jesusonic Transient Controller plug‑in to achieve frequency‑selective transient adjustment, another incredibly useful mixdown salvage tool. There are already third‑party plug‑ins available for this, but Reaper's bundled plug‑ins are perfectly capable of similarly bacon‑saving sonic transformations, such as tightening up the low end of flaccid kick drums and toning down high‑frequency pick noise on acoustic guitars.

Another great partner for band‑splitting is distortion. If you use full‑band distortion to dirty up complex sounds, such as drum loops, you can end up with a fizzy mush, whereas distorting separate frequency bands gives much more controllable added attitude. Subtler distortion algorithms, such as saturators and tube warmers, also become more flexible in a split‑band setup, especially with mixed material. The Jesusonic Nonlinear plug‑in works quite well for this, as it doesn't appear to affect the phase response of the processed audio much, while GVST's GClip and Silverspike's Rubytube (both freeware VSTs) get regular use in my own rig.

And the icing on the cake? After setting up all the routing and plug‑in renaming once, you can just save the whole thing as an effects chain from the effects window's 'FX' menu for instant recall in future mixes.

To download some of the effects chains used in this workshop, go to /sos/aug10/articles/reaperaudio.htm.

If you like the look of the band‑splitting effects I've described this month, but are still scratching your head about how to set them up for yourself, then surf over to [/sos/aug10/articles/reaperaudio.htm], where I've uploaded a selection of them. Just import them into your own project to get going with them straight away.