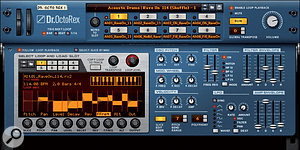 The big news in June was the announcement of Reason 5 and Record 1.5, both quite significant updates that add interesting new features and devices. It's quite possible they'll be available by the time you read this, so here's a practical guide to some of the new toys.

Dr Octo Rex is a souped‑up version of Dr Rex, Reason's loop player. The main difference is that it can load eight loops rather than just one (although it can still only play one at a time), but there are other crucial enhancements. First off, you can reverse slices: just select one and turn the 'Rev' knob beneath the waveform display. It's also now possible to treat a single slice with effects: simply select the slice and turn the Output knob to have it removed from the main outputs and emerge from one of a number of additional output pairs. Hook those up to an effects unit and into your mixer, and voila!

For tweaking slice parameters such as pitch and filter frequency, a new Slice Edit Mode comes into its own. Click the dedicated mode button to the right of the waveform display and then a parameter name underneath the waveform, and you can draw curves and set levels with the mouse: much more intuitive.

Looking at the bigger picture, though, Dr Octo Rex moves Reason into Ableton Live territory. Transposition and tempo change has always been possible with the REX format — but now just a few Dr Octo Rex devices, loaded up with appropriate loops, can form the basis of song‑length projects. Those eight loops can be triggered by MIDI notes, and the Trig Next Loop feature ensures that newly selected loops trigger neatly and at musically useful points in the bar/measure. This could be especially useful when combined with external controllers such as the Akai APC40 and Novation Launchpad. We'll look at this in detail when the Reason 5 dust has settled, as it has the potential to take Reason into completely new musical arenas. 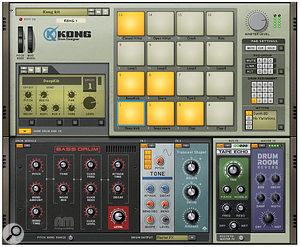 Kong Drum Designer delivers deep sound production and mangling potential in a fun and friendly package. Sound generators include a range of physical modellers, such as this snare module.

With its 16 pads in a 4x4 arrangement, it doesn't take a genius to spot where the inspiration for Kong comes from. But being software, and software by Propellerhead at that, there's quite a bit more flexibility than has ever been on offer in an Akai MPC.

The basic idea is that Kong is a modular drum-sound generator — every pad has the same potential capabilities, and they're extensive. For basic sound generation, you can choose from the sample players NN‑Nano and Nurse Rex, dedicated physical modellers for bass, snare and tom, and synth generators for bass, snare, tom and hi‑hat. These feed into two per‑pad effects, which include additional noise and tone generators, a compressor, EQ, and more specialised treatments such as Rattler and Transient Shaper.

All this is ridiculously easy to work with — just click the 'Show Drum and Fx' button below Kong's virtual LCD display to open up an extra lower panel. Then click the pad you want to edit, tweak the modules already in place, or choose new ones from pop‑up menus in the Drum Module, FX1 and FX2 sections. Reverb can be added in varying amounts for each pad, by calling it up in the Bus FX slot, selecting a pad and using the associated Send level knob in the 'LCD'.

It's official: Reason 5 can record audio! Samples are organised and edited via this new Tools window pane.

Until we see the release version of Reason 5, there's going to be some doubt as to exactly how Live Sampling is configured, and what its maximum recording time will be. But this is massive! What can be gleaned from pre‑release titbits is that it's delivered via Reason's sample‑based devices — NN19, NNXT, Redrum, and NN‑Nano in Kong. In each case there's a new 'squiggle' waveform button added to the group of sample selection and browse buttons. You click it and Reason starts recording, popping up a little waveform progress window. Then any selected NN19/XT zone or Redrum channel is instantly replaced with the sample. Sample management takes place via a new pane in the Tools window, and an Edit button there calls up an editing window with simple crop, crossfade and loop tools. It looks devilishly easy to work with, and apparently Reason performs automatic root‑key detection to make multisampled creations easy to set up.

For Record users, Live Sampling will be a fun, useful new addition, supplementing the existing audio recording features. But for die‑hard Reason stalwarts, it's a new universe. Suddenly, incorporating vocoder phrases or even verse- and chorus‑length vocals into a Song is a reality, in an application that supposedly doesn't do audio. Incidentally, audio input for sampling is configured from the Hardware Interface device in the rack.

Neptune provides Record 1.5 users with AutoTune‑like pitch correction, and then some.

The latest addition to Record is living proof that it's not Reason users who are having all the fun. So what does Neptune do? Well, think Antares Auto-Tune and you're in the right ballpark, as Neptune's Pitch Adjust mode effectively mimics Auto-Tune's live mode. But there's more... A transpose function allows overall transposing and tuning of incoming audio, with independent formant adjustment to help you to avoid (or deliberately generate) crazy gender‑bending and 'Pinky & Perky' vocal effects. It's also a polyphonic voice synth, capable of creating backing harmonies and double‑tracking effects in real time, driven from a MIDI controller.

To use Neptune for general pitch‑correction duties, just select your audio track and Create a Neptune device, which should be added to Audio Track device's Insert FX section. Then it's a case of enabling the Pitch Adjust button and choosing a suitable root note and scale from the central controls, or creating your own scale by selecting and deselecting keys from a little chromatic keyboard. To provide some visual feedback for this, the display above indicates pitch level in real time when audio is playing back. The Correction Speed and Preserve Expression knobs control the effect — no doubt setting the former to maximum and the latter to minimum will produce the most processed effect.

For some remarkable results, especially on sustained vocal lines, right‑click Neptune, create a sequencer track for it from the pop‑up menu that appears, and make sure the track is receiving an input from your MIDI controller. In Neptune, click the square that's labelled 'To Pitch Adjust'. Now, play your Song while also playing notes on your controller, and the pitch adjustment ought to be under real‑time control. Click 'To Voice Synth' and now your MIDI controller should add extra notes to the existing vocal line, instead of retuning it. As if that weren't cool enough already, Neptune will also have the flexibility to allow automatic pitch correction and voice-synth sound generation at the same time. So, lots to look forward to...

Here's a handy list showing how all Propellerhead's new goodies are divvied up between Reason 5 and Record 1.5...

What this latest round of updates hasn't changed is the fact that Reason still majors on sequencing synths and samplers, while Record is all about audio recording and a more sophisticated mixing environment. As before, Propellerhead nirvana is achieved by running both. You then get the fancy mixer features but can fill your rack with the full range of synths and sample‑based devices.