Reason 6 is probably the biggest update in the program's history. We give you the lowdown...

Reason 6 brings to an end the era of the Reason/Record duo; from now on it's a fully fledged, audio-recording DAW. At the same time, three new effect devices — Pulveriser, The Echo and Alligator — promise sound-mangling potency.

Record is dead. Long live Reason! That's pretty much the message of Propellerhead's recent announcement of Reason version 6. Life is going to change for devotees of both applications — and if you're reading this I guess that means you — so let's look at some of the facts and their implications:

Now that we've got the official announcements out of the way, let's look in more detail at how life might change for seasoned Reason and Record users.

First off, those new effect devices. Pulveriser joins Scream 4 as a distortion and general 'dirtying' effect. Simple two‑knob compression and distortion sections are complemented by a multi‑mode filter with on-board envelope follower and an LFO, which is whimsically labelled 'Tremor'. It looks easy to use, so it'll be fascinating to find out how it sounds. The inclusion of a dry/wet mix control certainly suggests Pulveriser might be designed with parallel compression of drum mixes in mind. 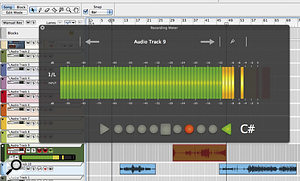 Reason 6's huge recording meter overlay will be a boon for guitarists and singers working at a distance from their computer monitors.The Echo is a new delay unit that, rather predictably, picks up some styling cues from Roland's RE201 and RE501 Space Echo tape delays. It looks set to massively expand Reason's abilities in this area, but goes well beyond what's possible in hardware. Stereo width and ping-pong effects appear simple to set up, and a dedicated Colour section includes a resonant filter, distortion and saturation effects for plenty of character and potential vintage quality in delay repeats. Where The Echo seems to come into its own, though, is in creative treatments. On-board modulation should take care of everything from a bit of tape flutter to rhythmic mayhem but, more importantly, two additional modes, Triggered and Roll, open up a range of 'bouncing ball' and stutter effects. They promise to allow you to 'play' the effect as if you were manually moving around a tape delay's play head.

A new time-stretch mode selection scheme paves the way for choosing additional more specialist algorithms.Alligator is billed as a 'Triple Filtered Gate'. It splits the input signal into three separate channels, each sporting a gate, modulated filters, drive, a phaser, delay, pan and a volume control. There are 64 on-board gating patterns, but you can program your own too, using the Matrix step sequencer or RPG8 arpeggiator, or simply by playing notes on a MIDI keyboard. Going well beyond the typical sequenced-filter effect, it has potential as a powerful rhythmic treatment for drum loops, synth pads and entire mixes.

Most other new Reason 6 features are the key elements being brought across from Record, as I previously mentioned. They include the new unlimited channel mixer, audio recording, comp editing, automatic audio time-stretching, the Neptune Pitch Adjuster, Line 6 guitar amps and stem exporting.

As well as audio transposing, though, there do appear to be one or two genuinely new features. A big Recording Meter overlay seems to tie in with features on the new Balance audio interface, and will be useful for when you record more than a few feet away from your monitor screen.

On Audio Track devices, there's a redesigned and apparently recharged time-stretch algorithm selection scheme. Previously there were two algorithms, Allround and Melody, and you chose between them with two buttons. Now there's a pop-up menu, and at least one more algorithm: Vocal. I wonder if there could be a specialised algorithm for drums, too?

Also, appearing in the transport section (of Reason Essentials, at least) are new waveform zoom controls, allowing you to scale up waveform displays without necessarily having to use the vertical track zoom as well. Certainly a handy feature, especially for the potentially very small waveforms on stereo tracks. 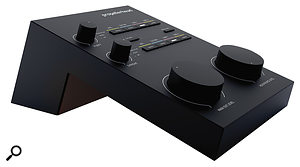 Buying Reason 6 from scratch when it's released on September 30th will cost €405$449. If you already have any previous version of Reason or Record (but not both), the upgrade will cost €149$169. For users of the Reason/Record combo, it's €99$99. And from the Reason versions sometimes bundled with MIDI controllers and the like — Adapted and Limited — the upgrade costs €279$299.

The exception to all this is if you buy (or have already bought) Record, Reason, or both, after July 1st and before October 31st 2011. Get the Reason/Record duo and you can score Reason 6 for free. Buy Reason 5 during the same period and version 6 will cost you €99$99. Likewise, if you pick up Record during the same period, then the Reason 6 upgrade will be €200$220. Go to www.propellerheads.se/shop for even more purchase and upgrade details.

Being launched at the same time as Reason 6 is Propellerhead's first audio interface, called Balance. This €405$449 USB 2 bus‑powered device is a 2-in/2‑out design that looks like it'll be ideal for the needs of many desktop and laptop musicians.

There's some fascinating integration with Reason, too. First of all, the entire interface can act as a copy‑protection dongle for Reason, meaning you don't have to carry it and your separate USB 'Ignition Key' around with you. Secondly, it has an intriguing feature called Clip Safe, which records any incoming audio at two gain levels simultaneously, on two different channels. If you discover that your recording clips during a take, you can switch over to the audio captured at the lower level, and apparently this is all done automatically. Sounds fantastic!

Other interesting features include front‑panel source selection buttons for each of the two input channels, not unlike on a domestic hi‑fi amplifier. These should help cut down on repeated plugging and unplugging of inputs, and let you keep a range of gear permanently connected. There are two mic inputs with individual phantom‑power switches, two guitar inputs with pads, and four line inputs.

Another important thing to note is that Balance comes bundled with Reason Essentials, the 'lite' version of Reason 6. If you already own Reason, Record, or Reason and Record, you'll get a free upgrade to Reason 6. It isn't available without software, though it will work fine as a general-purpose audio interface via Core Audio in Mac OS X, and with ASIO and WMD drivers on Windows.