Screen 1. To join or start a Link session, simply switch your Sync Mode to Ableton Link.

We show you how to get the most from Ableton’s Link technology in Reason.

With the latest 9.1 update Reason became the first desktop DAW outside of Live to support Ableton’s Link system. Link lets you use a Wi-Fi network to synchronise playback of music apps running on multiple computers and iOS devices. It makes it incredibly easy to jam with other people, and hook up your iPad/iPhone to your studio. This month we’re going to take a detailed look at what Link can do for you, and how it differs from other synchronisation options in Reason.

We’ll start with an example. I’d recommend giving this a go to get a feel for how it works: it really is ridiculously simple to get working compared to more traditional methods. The first thing I did with Reason 9.1 was sync it up with my iPad running Korg’s iElectribe app. In Screen 1 (above) I’ve selected Ableton Link as the Sync Mode in the bottom transport bar. Next I launched iElectribe and enabled Link in its top menu bar. Straightaway a notification told me there are two Link devices active. Next, I hit play on Reason, and then on iElectribe. The iPad counted down to the next bar and started playing in time with Reason. That’s it, no settings, no MIDI routing, no wires. And the sync is really super tight.

Hop On Hop Off

One of the coolest things about Link is that anyone can join or drop off at any time. There’s no concept of Master and Slave, so whoever started the Link session can leave without interrupting devices that joined subsequently. Anyone can also start and stop their own playback independently, and everyone can change the tempo. There’s no transport control between devices, and no positional information. Link simply creates a musical grid ‘pulse’ that any app can jump on at any time.

How a given app synchronises its playback to the Link grid varies. Reason will always try to keep its own bars aligned to Link bars. When you hit Play it will jump in in step as soon as possible. The iElectribe also syncs to the bar, but always waits until the next bar before starting playback. Ableton Live is slightly different as it will obey its Global Launch Quantisation setting and lock up to the Link grid with the bar positions offset. In any case, as Link uses no positional information equivalent to Song Position Pointers in MIDI Beat Clock, the time you start playback is up to you. So if you have a whole song playing in Reason, other apps can jump in at any place. Or, if you have different-length loops playing it’s up to you whether or not you trigger them in step on the first bar across devices.

One Two Three Four, I Declare A Tempo War

The tempo of the Link synchronisation is taken from whichever app started the session. After that, however, any app on the network can change the tempo and everything else will follow. There’s no way to restrict who can change the tempo — Link is a strictly egalitarian system! If two people try to set the tempo at the same time, the most recent update wins. If you drop Reason out of Link it will stay at the most recent tempo from Link.

It’s also possible to set different time signatures on different devices. If you do this, or if you set a loop in Reason that’s not a whole number of bars, then it can’t keep its bars aligned, but the beats will always be in sync. You can use this creatively to introduce polyrhythmic cycles.

The fluid nature of tempo with Link comes with a couple of restrictions in Reason. One is that the high-quality background processing of stretched audio clips is suspended, so you’ll always be listening in Preview mode. The other is that any tempo automation is ignored. The Tempo Track in the Sequencer’s Transport lane will be muted while Link is active.

Clock Vs Rewire Vs Link 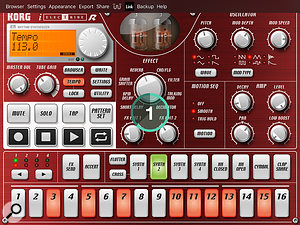 Screen 2. Link is supported by most of the best iOS music apps.It will probably be clear at this point that Link is aimed at quite different scenarios to the other sync options available in Reason. It’s a much ‘looser’ system, great for ad hoc jamming, some live scenarios, and syncing loops from mobile apps. If you need timeline sychronisation, transport linking, or syncing with hardware, Rewire or MIDI Clock are more appropriate. MIDI Clock provides tempo and positional sync between apps and hardware devices. Rewire is Propellerhead’s protocol for synchronising multiple audio applications on a single computer, and has been integrated into most major DAWs. As well as tempo and timeline sync, Rewire provides bi-directional transport linking and internal patching for audio and MIDI between apps.

Reason can still send MIDI Beat Clock while synchronised to a Link network, giving you a way to include your hardware instruments in a Link jam. However, Reason can’t use Rewire and Link at the same time. If, like me, you often use Ableton Live and Reason Rewired together, it’s game on because Live can still join a Link while controlling Reason. In this case Live and Reason are effectively a single entity in the Link session. There is yet another option which is to have Live and Reason both running on the same machine without a Rewire connection, and connect both to Link separately. This means that you can stop and start either individually, and ignore song position, which could be great for live use. Either scenario gives you a way to bring back tempo automation by the back door. If you have tempo changes in your Live project, either tied to Scenes or graphed in the Arrangement, they will affect the whole Link network, including Reason. To run Reason and Live with no Rewire link, simply launch Reason before you launch Live. 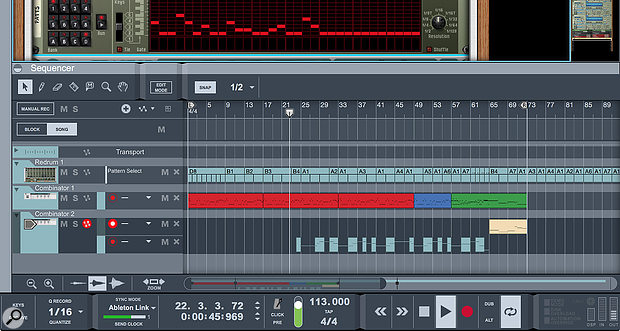 Screen 3. Reason hooked up to a Link session. The green progress bar shows the position within the bar.

As you might have noticed I hope to persuade you that Link is a thing of greatness and wonder, but I predict one objection: it relies on Wi-Fi, which is great if you’re at home but could be sketchy in live situations or when meeting up to jam with others. There are a couple of ways around this. One would be to add a small Wi-Fi router to your travelling kit. There are many sub-£$50 options, or, for a bit more, an Apple Airport Express is a good thing to have. However, where 100-percent robustness is required you can also use Link with a wired network, using a small switch. iOS devices can be connected by chaining an Apple Lightning to USB adaptor and USB to Ethernet adaptor. Happy Reason jamming!