Reason: How Powerful Is The Mimic Sampler? 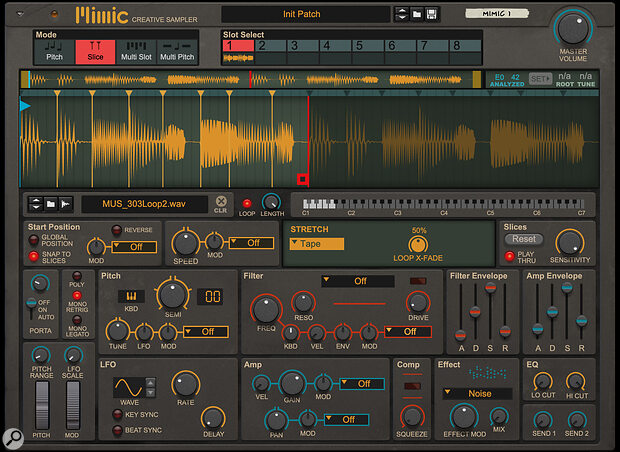 Screen 1: Mimic’s Slice mode and Play Thru features are the fastest way to chop samples in Reason.

Reason 12 is now out in the wild, with two major new devices: the Mimic performance sampler and the second‑generation Combinator. I’m itching to talk about both, but let’s take them one at a time and get stuck into Mimic this month.

Reason already has a few sampler type devices. NN‑19 is the original sampler, which has been around since version 1.0 and is related to classic rackmount samplers like the Akai S1000. It’s designed for playing back keyzone mapped samples, complementing the Redrum sample‑based drum machine and Dr Rex loop player. Later on this was joined by NN‑XT, which is essentially the same type of instrument as 19, but with the ability to layer samples and configure more performance controls and modulation. These samplers, supported by the multi‑device patching and macro control features of Combinator, provided an engine that could happily power most traditional sample library content.

The NN devices are more like workhorses than fluid, creative samplers like, say, an MPC, or the Simpler device in Ableton Live. And that’s where Mimic comes in: it’s a sampler where you can quickly drop, trigger and mangle individual samples. The Grain instrument covered some of this ground in Reason 10, but as the name suggests it’s focused on granular resynthesis. Mimic brings the same immediacy to regular sample playback and chopping. But while it’s simple, there’s a bunch of interesting and inspiring ways you can use Mimic; so I’m going to speed through the basics and then get to some ideas and tricks.

Mimic has a similar layout to Grain, with a full‑width waveform display at the top, and various modules below for settings, modulation and effects. It’s actually a fair bit simpler and more approachable, without the advanced envelope designer and modulation grid that’s been a standard part of many Reason Studios instruments.

Samples can be dropped in from the browser (or desktop), or imported from the familiar sample loader, which also features a real‑time sampling button. Samples load into the eight slots, selected above the waveform. The slots are used in slightly different ways depending on the mode chosen from the top left of the panel. In Pitch and Slice modes, the slots are selected and played separately, one at a time. In Multi Slot mode, the slots are laid out on the keyboard and can be triggered simultaneously, but not pitched. The layout is repeated on each octave. Multi Pitch mode works much like a traditional sampler, with the slots layered on the keyboard where they can be zoned into note ranges.

Samples dropped into an initialised Mimic will default to playing in Pitch mode, where you can play the sample across your keyboard. C3 will be the original pitch, but this root key can be adjusted (look just above the waveform and to the right). An auto‑detected suggestion is shown here, which you can accept by clicking Set. In Multi Pitch mode the key settings are independent for each slot, as in fact are all other panel settings.

Screen 2: The Advanced Stretch mode is so transparent you can slow samples down to a near stop.

Separate from the mode is the Stretch type. The default is a traditional varispeed, which Mimic calls Tape mode. As well as following key pitch (and root note), there are independent Speed and Pitch controls, which in Tape mode are essentially doing the same thing. In all the other Stretch modes, Pitch and Speed are independent. Three time‑stretch modes are provided. Advanced is a general purpose algorithm that is incredible on most material. As we’ll see when we get into creative tips, it really extends the range of what you can do with a sampler. Melody is tuned for monophonic sources. Vocal is optimised for vocals (and speech) and has a formant shifter built in, plus a Fixed Pitch mode, which we’ll come back to. Finally, there’s a Granular mode, giving you a fairly basic granular synth.

As the inventors of the ReCycle loop format, sample chopping/slicing is part of Reason Studios’ heritage, and there’s always been a REX player device in Reason. However, if you wanted to chop a sample yourself rather than import a pre‑sliced file, it’s not been that straightforward. You needed to edit the sample in an audio track, then export out to another device like Kong or Dr Rex (we covered this process in the April 2017 edition).

As the inventors of the ReCycle loop format, sample chopping/slicing is part of Reason Studios’ heritage, and there’s always been a REX player device in Reason... Mimic brings a simpler and more spontaneous approach with its Slice mode.

Mimic brings a simpler and more spontaneous approach with its Slice mode. This uses transient detection to automatically add slice markers, with a Sensitivity control in the Slices panel to the right of the unit. There’s no real‑time manual dropping of slices possible, but you can move slices directly in the waveform display. Double‑clicking a slice marker deletes it, and double‑clicking an empty area adds a slice. You can also adjust the overall start and end points, which is very useful after direct sampling. Clicking and dragging up or down in the waveform display zooms for finer edit control.

Slices are assigned to keys from C1 upwards. Playback defaults to Poly, so if you slice up a drum loop into individual hits you can play the patch like a drum kit. You might want to add some velocity in the amp section, and perhaps an envelope. For re‑sequencing the slices into a new pattern — MPC style — try switching to Mono Retrig mode. There’s no tempo match function, so if you’re using longer slices with rhythmic contents you’ll need to fiddle with the Speed manually. A fantastic feature (that got special mention in last month’s Chopping feature) is the Play Thru mode. With this engaged, when you trigger a slice, the sample will continue to play past the end of the slice. This is really effective for smoothly playing drum breaks without gaps.

The rest of Mimic’s sections are modulators and some processing. I’m going to leave them for you to explore so we can look at some creative Mimic tricks...

The Advanced time‑stretch on Mimic is so transparent that it opens up some interesting possibilities. My favourite is to use Mimic like a granular synth, but without actually going granular. Samples can be slowed right down to get long, slowly evolving textures. You can even slow to a complete stop and get a short cycle that still sounds like the original sample. Add modulation to the Speed and things get even more interesting. With Speed very low or stopped, try modulating with an LFO. Playback will sweep between forward and reverse. It’s like granular but much smoother.

Experimenting with the start position parameters yields interesting results. First there’s the Global Position switch, which forces legato‑played notes to trigger sample playback at the current position instead of retriggering. For synth samples that have an inherent envelope this provides a classic synth legato response. For a sampled phrase it lets you add polyphonic harmonies progressively.

The Start position can be modulated from numerous sources. With a longer, shifting sample, I tried selecting Random and Velocity as modulators. Each played notes is then tonally different, which can be dramatic or subtle depending on the sample. The Snap To Slices button can be used with this trick to quantise the Start position to slice points. Cleverly, you can set slices in Slice mode, then switch to a different mode like Pitch. The slices will then be used during Start modulation. This proved great for random percussion, or for weird chopped‑up vocals.

The manual has a cool suggestion for Start mod: creating velocity zones. This is an ingenious way to very quickly sample an instrument dynamically. Record in a source played with progressively louder articulation. Then slice it into zones, and assign Velocity to Start Position with Snap To Slices engaged. Voila: instant dynamic sample playback with no MIDI data programming. 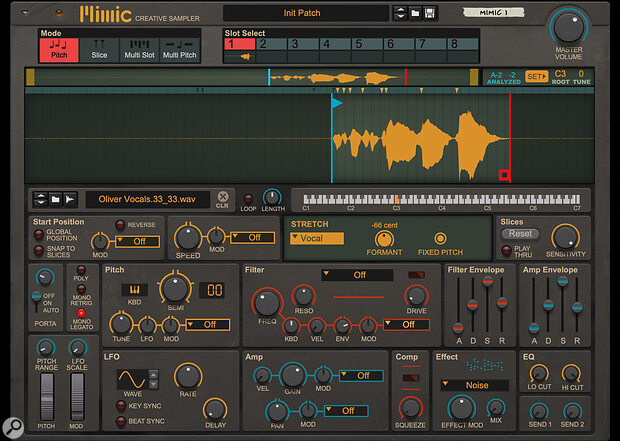 Screen 3: Live triggering and re‑pitching of vocals and speech in Mimic has huge creative potential.

Perhaps the most fun I had with Mimic was playing with spoken phrases and vocal lines. The Advanced Stretch and Speed controls are once again great here, but try the Vocal Stretch mode and experiment with Mono vs Poly triggering and Global Start on or off. Fixed Pitch is where the real fun is. This forces the sample to play at the pitch of the MIDI note. It’s similar to the Vocal Synth mode in the Neptune Pitch Adjuster, except that you’re triggering the sound instead of it being on a track, and you can freely mess with Speed at the same time. Imagine a really transparent vocoder. You can go completely bonkers with this, or try using it as a fresh take on the ubiquitous Auto‑Tune gloss.