In Theory And In Practice By Sam Inglis 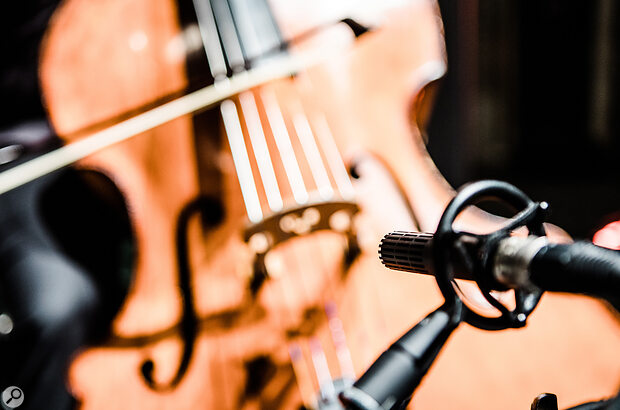 We all know that close miking boosts the low end. But why? New research from DPA Microphones explains that some instruments are more affected by proximity effect than others.

'Proximity effect' is the tendency for low end to become exaggerated as a directional microphone is moved closer to the source. Sometimes we can use it to our advantage in recording; other times it’s a nuisance that has to be worked around. Yet, although anyone who’s ever used a microphone will undoubtedly have come across it, proximity effect remains poorly understood. How many of us can confidently say that we understand why proximity effect happens, or how that theory translates to practice?

Eddy Brixen and DPA Microphones have carried out some fascinating research into proximity effect, which we’ll be sharing later on in this article. As we’ll see, it turns out that real‑world sources and microphones don’t always behave quite as you’d expect, and that proximity effect is highly dependent on the type of source you’re miking, as well as on the mic choice and placement.

To understand this research properly, though, we need a proper explanation of the phenomenon in question. How, and why, does proximity effect occur?

What Is Proximity Effect?

There are two fundamental types of microphone. One measures air pressure, like a very fast‑acting barometer; in effect, its output reflects the excursion of the diaphragm from its rest position. The other measures the rate of change of air pressure, and its output represents the velocity with which its diaphragm is moving. 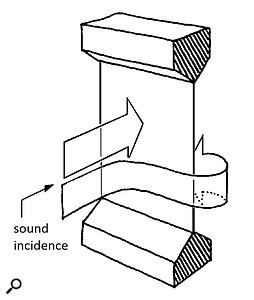 A simplified view of a pressure‑gradient or velocity microphone. Sound arriving on‑axis has to travel further to reach the rear of the diaphragm than the front.A pressure mic has a diaphragm that is open to the air only on one side, and is intrinsically omnidirectional. By contrast, the diaphragm of a velocity or ‘pressure gradient’ mic is open on both sides, and the mic has a figure‑8 polar pattern. A pressure mic does not exhibit proximity effect, but a pressure gradient mic does.

However, there’s another factor that can cause a pressure difference across the diaphragm: the inverse square law. This states that, for a source that radiates sound equally in all directions, sound level falls according to the square of the distance from the source. Put another way, the sound pressure level falls 6dB for each doubling of the distance from the source.

If we place a pressure‑gradient mic just 1cm from a such a source, the rear side of the diaphragm is twice as far from it as the front side. This means the rear of the diaphragm isn’t only encountering the sound wave slightly later than the front: it’s also encountering a version of it that’s half as loud! By contrast, if our mic is 10 metres from the source, the difference in acoustic power between front and back due to the additional 1cm path length is negligible. 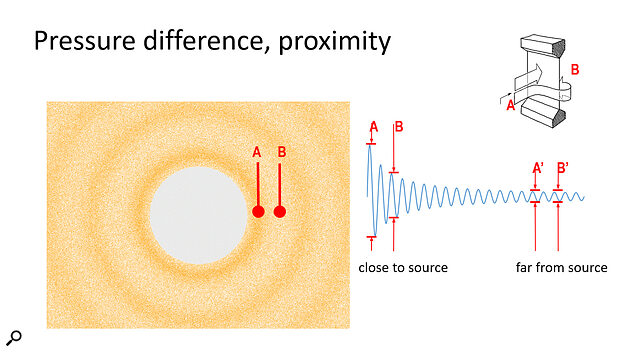 As this schematic diagram illustrates, the difference in acoustic power across the microphone due to the inverse square law is negligible when far from the source, but can be significant when close to the source.

But why does this affect the low‑frequency response of a microphone? Our hypothetical 1cm difference in path length from front to back is fixed, but the wavelength of sound varies with frequency. A 5kHz sine wave has a wavelength of 7cm or so, whereas the wavelength of a 50Hz sine wave is almost 7 metres. If both waves have the same peak‑to‑peak amplitude, the 5kHz sine wave will generate a far greater pressure gradient across a 1cm gap than the 50Hz sine wave. Any pressure gradient created by the inverse square law will be negligible compared to that created by the 5kHz wave, but not when compared to the very small pressure gradient generated by the 50Hz wave. In other words, the relative contribution of the inverse square law doesn’t only depend on distance, but also on frequency.

This discrepancy between the pressure gradient created by low and high frequencies gives the simplest form of pressure‑gradient microphone a naturally rising frequency...