The SubTractor bass patch, after not many knob tweaks: it's subby, but it cuts through a mix.

Sound On Sound readers who use Reason have spoken: they want our help in getting the best from this popular package — and we're happy to oblige with a new monthly column.

The results of Sound On Sound 's recent readership survey have not yet been fully analysed, but preliminary results revealed that a decent percentage of you are confirmed users of Propellerhead's Reason virtual electronic studio software. What's more, a recurring request from these users is for more coverage of Reason in SOS. No sooner said than done: welcome to the first instalment of our new monthly Reason Notes column, which takes its place alongside our existing columns for the other leading sequencer packages.

Where does one start with a program as complex and fulfilling as Reason? The software is actually nowhere near as obtuse or difficult to learn as some other packages, yet newcomers — especially those with little experience of the hardware being emulated in Reason 's rack — can find it overwhelming. It simply offers so much. One good guideline is to start small, perhaps by limiting your rack to just a handful of devices. Another is to direct your attention to any SOS article on analogue synthesis: Propellerhead's design choice means that such articles can be digested and the techniques applied within Reason. Practically any book on analogue synthesis and electronic music studio techniques written in the last four or five decades could help you develop a sound-design and composition strategy.

This column will also try to help: despite the fact that it's accessed by a mouse, Reason is a very-hands on package that invites tweaking, and that's the clue to really getting the hang of the software. I'll be offering some ideas about where to start with your tweaking, and exploring sound design with what is, after all, an integrated electronic music studio in your Mac or PC. We'll also look at lateral approaches to things the software can't, or appears to be unable to, do. 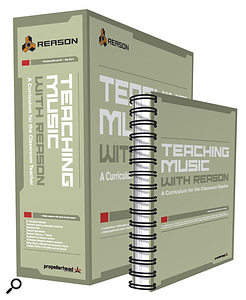 Teaching Music With Reason: the package. Propellerhead really pay attention: Reason has become quite an educational tool wherever music technology is taught, and in response to this they've released the Teaching Music With Reason package. Aimed at secondary school and higher music technology classes, the course helps to develop musical and composition ability as much as it does to teach electronic music skills. The integrated approach includes the teaching of mixing techniques, improvisation and using loops, and finishes with the compilation of a CD of coursework.

Along with the software, the package includes lesson-preparation material, teaching plans, student worksheets, 'How to' guides and assessment sheets. There's apparently enough material to take students through a couple of terms of weekly lessons. Teachers who are unfamiliar with Reason are supplied with background information so that they can stay one step ahead of their students!

The root of most music is the bass, and when I first started working with Reason it was very important for me to be able to produce bass patches with the SubTractor synth that had a real subby, woofer-shaking low end — I like to feel bass in my tracks as much as hear it. So here's an approach you might like to try if you have trouble achieving a full bass sound.

The settings for a quick Scream 4 bass enhancer patch: we'll look at using this versatile device for mix processing in future.

Since V2.5, I often take a cheating approach to adding what night almost be called bass enhancement, by way of the Scream 4 distortion device, which can be used quite subtly for this task.

First, highlight a SubTractor and create a Scream 4 (it'll be patched in line with the Sub's audio output). Turn the Damage control down a little so it's not distorting so much, select the 'Tape' Damage algorithm, and tweak P1 (Tape Speed in this case) fully left and P2 (compression) as far to the right as feels good to you. If you want to go even further, engage the 'Cut' section, and move the Lo slider up (the section is labelled 'Cut', but doing this actually boosts the bass frequency of this simple but effective EQ). Even more resonance can be added by playing with Scream 4's Body section (especially Body types D and E). Indeed, tweaking these parameters takes us further into Reason 's potential for integrated sound design: the effect is as much part of the sound as what was produced by the original SubTractor.

Reason, as originally conceived, was meant to have more in the way of live performance facets than it did in the final release. There are a few oddities in its control set that hark back to this, and Propellerhead occasionally hint about adding the features at a later date.

But perhaps Italian software house Petertools have beaten the Props to it. Their Liveset software aims to be a configurable link between your MIDI hardware controller(s) (keyboards and control surfaces) and Rewire-compatible applications. Currently, the application in question is more specifically Reason (as Liveset was developed for it), though other apps will be directly supported in future. 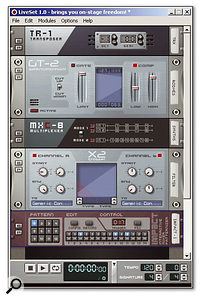 Liveset aims to provide Reason users with live performance tools.Graphically, Liveset has clearly been inspired by Reason: it's presented as modules placed in a virtual rack, each device can be named via a scribble strip, and interconnections between modules are made with virtual MIDI leads. Functionally, Liveset 's modules are rather like MIDI plug-ins — similar in feel to those provided with Steinberg's Cubase SX, say — that are placed in line between your MIDI controllers and the Reason rack. Reason has no such data-manipulation tools, so in one way this is a back-door approach for a third party to add new features to the program. Liveset was created because one of the developers, who uses Reason as part of his live setup, wanted the tools it provides.

The Petertools software provides two MIDI inputs, so at least two performers (or one performer with two controllers) can play Reason as if it were a rack full of real synths, with none of the restrictions that would be entailed by playing it directly. Particularly conspicuous are the note and controller multiplexers, which each provide eight separate MIDI outs from one MIDI In (or two sets of four MIDI outs from each of two MIDI Ins), so that many Reason devices can be easily played at once. (Using Reason 's Hardware Interface only lets you play four devices simultaneously.) Easy-to-use key splitting on one MIDI channel — something else Reason can't do — allows complex splits of multiple Reason devices to be created, and the remaining devices provide some useful note and data manipulation including note transposition and controller crossfading.

Liveset, in its beta format, is very much a real-time live performance tool — which is highlighted by the fact that it wouldn't be possible to record a Liveset-driven performance into Reason 's MIDI sequencer. As powerful as Reason is, it can still only record one thing at a time, and in any case there is currently no way to route MIDI data from Liveset (or any other Rewire application) directly to a Reason sequencer track. The software talks to Reason devices directly, in the same way that Cubase SX does when it's Rewired to Reason.

Liveset also offers an alternative transport bar, complete with song position, playback loop points and tempo controls. Usefully, for on-stage use in light-compromised situations, there's a big song position display! Currently, the software is PC only, requiring a 633MHz P3 or better processor, Windows 2000 or XP, a MIDI interface and an audio card with ASIO drivers. Liveset is going through beta testing as I write, but progress is quite advanced and the software should be available later this year, at a price of around 149 Euros (£99). I'll have another look at Liveset in a future column. In the meantime, check out www.petertools.com.