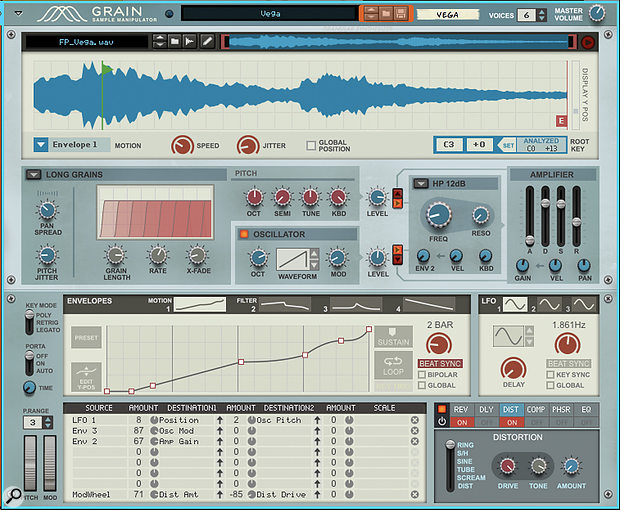 Screen 1. Grain’s flexible multi-stage envelopes give you fine control over playback position within an audio file.

We get to grips with Grain, Reason 10’s versatile new granular synth.

Reason 10 brought us two fantastic new synths. Last month we showed due deference to the new flagship, Europa; but between you and me my favourite is Grain, which we’ll explore this time.

Grain is, unsurprisingly, a Granular synth, whose sonic starting point is always a single imported sample. It reminds me of the classic Reaktor instruments Travelizer and Skanner XT, which are also on my all-time favourites list. The concept is relatively simple: drop in an audio sample, choose one of the playback/resynthesis methods, then modulate the playback position and speed as you trigger the sample from the keyboard.

Grain could be used along the lines of a traditional sampler, with options to re-pitch across the keyboard via classic varispeed or granular warping. More interestingly, it’s a versatile and playable synth, with several ways of using an audio sample as a continuously varying tone source. And Grain is also a very musical sound design tool, letting you explore amazing shifting soundscapes.

A browse through Reason 10’s factory patches will let you hear what Grain can do and give you an idea of how sounds are created. These presets all use audio files from within the standard Reason factory sound banks. For this tutorial we’ll start with a blank slate, though.

After dropping Grain into your Rack, right-click on it and choose Reset Device to set everything to default and clear out the audio sample. Now you need to find a sample in the browser and drag it into the waveform area. A good place to look is in the ‘Other Samples’ folder in the Reason Factory Sounds refill. You can also sample directly into Grain and edit samples using the standard panel buttons.

Above the waveform, you’ll find a zoom control for focusing in on the section of the sample you want to work with. By default this doesn’t show the whole sample, and won’t change if you swap in a new file, so zoom out to make sure you’re not missing anything. To the right of the zoomer you’ll find a Preview button which lets you hear the original sample at any time.

The two foundational parameters of a Grain patch are the Motion type and Playback Algorithm. The algorithm determines the fundamental sound engine being used. Its module is right below the waveform and is set to Long Grains mode by default.

Long Grains is the classic granular resynthesis mode, which will be familiar if you’ve used other granulars. To recap some theory: granular synthesis chops up an audio sample (or signal) into small chunks (‘grains’) that can then be triggered separately in sequence or any other order, usually with the aid of crossfades to smooth the output. This allows the sample to be replayed at different speeds, and in different directions. It also allows for re-pitching without changing the length of the original sample. Beyond these basic uses, you can use the process to radically alter and manipulate sounds.

Long Grains is a great mode for seeing and hearing granular synthesis in action. Try setting the Grain Length to maximum, and the Rate and X-Fade to minimum. If you hold a note on your keyboard, you’ll hear a fairly large audio chunk (about a third of a second) being triggered about once every second. Increase the X-Fade amount and you’ll hear a smoothing envelope applied to each audio burst. Now turn up the Rate, and you’ll hear the grain triggered with increasing frequency, with multiple grains starting to overlap. As the rate gets higher the sound becomes more continuous instead of stuttering.

The artifacts of long grain granular synthesis can be part of the charm, but if you’re trying for a natural or smooth-sounding result the key is variation between grains. This avoids comb-filtering or an artificial-sounding cycling waveform. Shorter grain size can help but will also take you further from the original character of the sound. More important is movement of the play position within the sample.

As well as Forward Loop, other classic sampler-like motion modes include FW-BW Loop and One Shot. In any of these modes you can set a Start and End position using the markers in the waveform display. These can both be shifted by any modulation source in the matrix, as can the current actual Position. If you want to explicitly determine the path of the Position with each note trigger, you can choose the Envelope 1 mode and draw the exact path into the first Envelope slot. A great thing with this is that you can define a movement stage on release.

My favourite modes are Freeze and End Freeze. Freeze provides no inherent movement of the ‘play’ position within the sample, allowing you to ‘park’ the sound at a specific part of the sample, then use modulation sources for all movement. Even a small amount of LFO will bring the sound alive in this situation, and is often smoother and more pleasing than using Jitter.

So what about the other Playback Algorithms? Grain Oscillator takes a different approach: it uses just two short grains, spaced apart relative to the playback position according to the Grain Spacing control. Grain looping rate is hard-wired to generate notes, hence ‘grain oscillator’. Adjusting the sample’s original pitch or the oscillator pitch settings changes the tonal fingerprint of the sound rather than the fundamental pitch. You can also affect the tone by adjusting the formant. With the spacing very low this mode can sound similar to Long Grains, but as the space increases it becomes more like a wavetable synth.

Spectral Grains offers another realm for sonic exploration. I don’t know exactly how it works but I believe it’s similar to iZotope’s Iris or Virsyn’s Poseidon. It grabs grains from your waveform, calculates their harmonic content via FFT analysis, then resynthesizes the sound, presumably using an additive method. You can then manipulate this series of partials like you can in Europa or Propellerhead’s Parsec synth.

You can adjust the formant of the sound, which in this case is much like slowing it down or speeding it up. You can also draw a filter curve, which is imposed onto the harmonics of your sound by varying degrees using the Amount knob. Then you have Snap and Filter controls, which are two different ways of forcing the sound towards a regular harmonic series. Snap will actually move partials to the closest harmonic overtone, while Filter removes partials that fall between these points on the spectrum. This lets you create playable synth sounds from just about any audio source. Applying this processing to harmonically rich musical sources initially seems to break them down into inharmonic tones then force them back into line, which is a really interesting effect.

Finally there’s Tape mode, which uses traditional varispeed sample playback as opposed to resynthesis. This is a really worthwhile addition to the synth as you have much more control and modulation of the sample playback speed than with conventional samplers.

In addition to the main granular audio engine, Grain provides a traditional oscillator that you can blend in. This can help to impose a melodic element on more exotic or inharmonic granular sounds. Both sound sources can route through or bypass the master filter, which has fairly neutral 2-pole LP, BP and HP modes, plus the 4-pole ladder filter mode that we saw on Europa. As with Europa, even if you don’t want to do any filtering, it pays to route through this filter and leave it open as it gives a good level and warmth boost. Also shared with Europa is the selection of six final-stage effects that you can re-order by dragging. Lastly, make sure to play with the Pan and Pitch Jitter controls available in most modes: these can spread and detune each individual sound grain, creating the most beautifully spacious sounds. 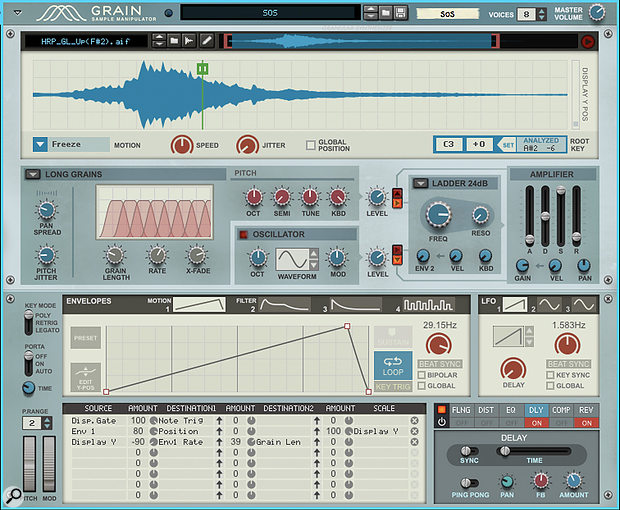 Grain gives you ample ways to modulate the playback position within an audio sample, but my favourite thing about some of the classic Reaktor granular constructions is being able to manually scrub within the waveform, or use an X-Y zone to manipulate playback position and loop length in real time. Happily this kind of interaction is totally possible in Grain via direct manipulation of the waveform display. In most Motion modes you can update the start and end times with the mouse, and in Freeze mode you can directly manipulate the playback position. The waveform display also sends the mouse’s Y-position and clicks to the modulation matrix.

In Screen 2 I’ve mimicked the classic Reaktor granular module. In this patch clicking in the waveform triggers notes, and you can scrub the position in the sample in real time. I’ve used a looped Envelope to scan a range of the sample to the right of the playhead. In the mod matrix, the depth of this envelope, and also its speed, are adjusted by the mouse Y-position, so you can manipulate position, loop length and playback speed continuously with the mouse, and capture this as automation.