1. Radical Piano’s panel is dominated by the mic/piano source blender.

We get to grips with Reason’s aptly named Radical Piano.

The two new flagship synths that arrived with Reason 10 have understandably hogged the limelight, not least in these pages, but they weren’t the only new instruments. Joining them in the Rack were Radical Piano, and a trio of new sample-based devices: Klang Tuned Percussion, Pangea World Instruments and Humana Vocal Ensemble. This month we’ll look at the first of these, which as the name suggests, is not just another piano sampler.

I hadn’t paid Radical Piano a lot of attention in the five years since it was originally released as an independent Rack Extension. Reason has a couple of pretty nice pianos in its default libraries and the ID8 piano is perfectly serviceable. However, it turns out Radical Piano is well worth exploring in depth, and has some unique and intriguing features.

In essence Radical Piano is a sample-based instrument which combines elements of physical modelling. By reducing the reliance on large sample sets, Radical Piano lets you switch between sound sources very quickly. You can choose and blend sounds from various mics placed around three different pianos. The panel provides a number of ways to change the character and response of the pianos, and there are built-in EQ and reverb modules. Most interesting of all is the Resonance control which introduces sympathetic resonance from unplayed strings into the mix.

The main top panel on the Radical Piano rack device is devoted to the choosing and blending of sound sources. The sources consist of various mic arrangements from three recorded pianos. The same set of options is repeated on both sides of a large ‘Microphone Blend’ knob, allowing you to crossfade between two sources. The conventional approach here, and the most useful in the majority of circumstances, is to choose two mic sources from the same piano. However, you can mix and match. I confess I’m not 100 percent convinced of the utility of this, but if you fancy blending a close-miked upright with the room ambience of a concert grand, knock yourself out!

The three pianos are Home Grand (a Bechstein), Deluxe Grand (a Steinway Model D from Swedish Radio, which I think I’ve seen in the flesh) and Upright, which is a Futura with what Propellerheads describe as having a ‘living room’ character. The Deluxe is especially nice and the one I’ve gravitated to most of the time. I also really like the Upright. I expected it to be the obligatory quirky honky tonk in the collection, but is actually well tuned and has a lovely clean, yet mellow, tone. I’m not so keen on the Home Grand’s bright and metallic, harmonic-heavy voice.

The Reason 10 manual provides handy diagrams of the mic placements, along with more information about the microphones and their configuration. The Deluxe Grand and Upright both have five mic sets in similar configurations, while the Home Grand only has two. The Close Mics are an X-Y stereo coincident pair placed in a central position near the hammers. Their proximity captures the attack and direct hammer-on-strings sound, and spreads the keys across the stereo image somewhat. The ‘Jazz’ mics are a spaced A/B pair pointed toward the bodies of the pianos, and do a good job on their own in capturing balanced recordings of the instruments. The Floor mics are a pair of PZMs. These are particularly nice blended with the Jazz or Close mics, pulling the sound in somewhat and giving it a more rounded, slightly darker tone. The Vintage mic is a ribbon on the Deluxe model and a classic tube mic on the Upright. They are placed slightly back and above the pianos. They are certainly not as rich sounding as the others, but sit nicely in a mix with a little Jazz blended in. Finally the Ambience mics are another spaced pair placed further away to capture the room tone.

Alongside the mic and instrument choices is a ‘Character’ control, which has a central Natural position, and Subdued and Agitated settings at the extremities. The manual describes this control as adjusting the sound from ‘warm and mellow’ to ‘brighter and more pronounced’. I’m not really sure what it’s doing, but the fact that the control is stepped, and the sound drops out for a moment when adjusting suggests that it’s swapping between sampled sets with different amounts of processing. In the Agitated direction the sound gets bright and thin. In the other it’s more filtered. I wasn’t super keen on either so left this control alone for the most part.

With just these main features Radical Piano is a really versatile virtual piano, but the lower panel gives wider scope for sound design. The Ambience section provides dedicated reverb over and above what you get with the Ambience mics. And as you’re limited to two mic sources there are plenty of times when you can’t use the original captured ambience. Four reverb types are provided, from Small Room to Theatre, all nicely chosen to enhance a close-miked piano.

The three-band EQ and Compressor are fairly conventional mix tools. The width control sets the pan width of the stereo mics and therefore has no effect if you’re using just the Vintage mono. Velocity Response and Envelope let you start to move away from a purely naturalistic piano response. By adjusting the high and low Velocity levels you can push the dynamic range beyond, well, piano and forte. At the lowest velocity setting you can gently press keys without playing a note, which may come in handy when we get to the Resonance section.

Before that, though, let’s talk Sustain. In most virtual piano instruments Sustain is either on or off. Radical Piano’s Sustain is a continuous control, letting you simulate holding the Sustain slightly down and giving you smoothly variable control over release time. Again, this is useful in conjunction with the Resonance feature. Obviously your average MIDI Sustain pedal is a switched control, but the panel provides a slider that you can modulate by hand or map to an Expression pedal or other controller. 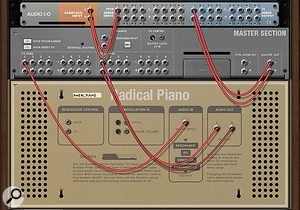 2. Radical Piano’s Resonance feature makes a truly unique effect when it’s patched in as a Send device.Probably the most radical feature of Radical Piano is Resonance. This is a simulation of the sympathetic vibration of unplayed strings as they are excited through the body of the instrument. This is particularly significant when the Sustain pedal is down and all strings are free to vibrate. Radical Piano is also intelligent enough to include keys that are currently being held down (and therefore undamped), even if the initial note they played has died away. Clever!

Controls for the Resonance effects are simple: just a level control and a release time knob. To try it out, simply turn up the level, then play some notes with Sustain active. To my ears it’s really effective, adding a little touch of extra realism and character.

An extra bonus is the ability to use the Resonance module as an external audio processor. Feed audio into the mono input jack on the rear of the device and the incoming signal will trigger the resonant string sound (the original audio does not pass through). The sound then runs through the EQ, Ambience and Compressor stages on its way out. It seems like the string resonance is generated based on the frequency content of the input signal, so it acts something like a very specifically set-up vocoder. Or to put it differently, adding this signal chain as a Send produces the same effect as firing your audio into the body of a piano! This is tons of fun. If you want to get really clever, you can further shape the result with the Sustain control, or with key presses/MIDI notes. The simulated resonance from the strings that are undamped will ring out longer than the others. This is definitely one of those things that’s easier to try than explain!

I confess that I’d thought Radical Piano wasn’t going to be that interesting, especially as someone who doesn’t use piano very much. It turns out to be really useful as an immediate and flexible source of quality piano sounds, with hidden talents that make it playable and responsive. It’s also capable of creating more exotic but grounded piano sounds. With Sustain parked half open, Resonance cranked up and a touch of Pitch Drift dialled in, I was happily churning out Future Sound Of London-style filmic piano lines.