Propellerhead’s uber-modulator Synchronous is now included for free with Reason 10.

For some reason I didn’t get to grips with Propellerhead’s Synchronous Rack Extension until recently. And now that Synchronous is part of the standard set of Reason 10 devices it seems the perfect time to have another look at this versatile modulation generator and synchronised effects processor. 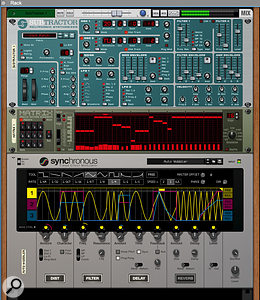 Screen 1. Yes, with three layers of continuously variable modulation Synchronous is probably to blame for most dubstep!Synchronous lets you hand craft three independent modulation sources with up to 32 steps each. These curves, sequences or envelopes can then be applied to the four built-in effects, or patched elsewhere via CV. In some ways it’s a forerunner of the custom envelope features in Europa and Grain. As well as letting you sculpt the exact LFO, envelope or step source you’re after, Synchronous can create complex and varied rhythmic movement. I have a theory that it’s been responsible for a large portion of the more indulgent excesses in dubstep music.

Despite looking complex, Synchronous’s front panel has quite a simple layout, split into two halves. The top half is a display devoted to setting up and controlling the modulation graphs, while the lower control panel is devoted to the audio effects that are applied to any signals patched through the device. Both sides can be used completely independently if necessary.

The main colourful part of the display shows the three envelopes superimposed upon one another. (Synchronous was one of the first Rack Extensions to showcase an update to Reason that allowed for more complex UI elements and interaction). The three coloured blocks to the left labelled 1, 2 and 3 select which curve is focused for editing. The focused curve is displayed brighter than the others, and there’s a Dim knob for setting how visible the other curves are. At the other end of the display you have Freeze and Kill buttons for each curve, which pause or disable each modulator. The Freeze controls have dedicated CV inputs on the rear panel for external control.

The length of each curve can be set independently, from one to 32 steps using the small lane at the top, which also shows playback position. Above the curve display there’s a Speed setting, offering normal, half, or double playback rates, again set separately for each curve. The Phase knob ‘slips’ the current modulator’s shape within the curve window, changing its start position and its phase with respect to the other curves. By contrast, the Master Offset knob shifts the starting step position for the whole device relative to the bar. It’s important to note that Synchronous modulation sources are always synchronised in one way or another to Reason’s tempo, and only play when the transport is running. Synchronous curves can’t act like free-running LFOs.

Ahead Of The Curve

To create or edit a curve you select from the strip of Tools and Rates at the top of the display then draw straight into the curve graph. It takes a little experimentation to grasp how this behaves: it’s different from free-hand drawing, or break-point editing. The Tool selects a target shape, and the rate determines the length, measured in bar divisions based on normal playback speed. So, for example, if you choose a Sine shape and set the rate to quarter notes, then draw through the full curve display you’ll get a sinusoidal curve with eight peaks (as the full 32 steps represents two bars). Choosing a rate or 1/16 result gives you a complete cycle of the target curve within each step.

Screen 2. The curve drawing system allows for different wave shapes and amplitudes at each slice position.The curve height (and therefore mod depth) at each step is determined by the mouse’s position as you click or drag through steps. This is always measured from the bottom of each step in a uni-polar fashion. Thus if you click individually in each step at different heights you can get disjointed sections of the target graph butted together (see Screen 2). If you ‘draw’ continuously through the steps there are two different behaviours, determined by the Free button. In Free draw mode the curve peak will snap to your mouse position from step to step. With Free mode off, the heights of each step will conform to a straight line that joins the start and end position of your mouse drawing.

When either of the first two drawing tools are selected, the rate options disappear. These tools (Step and Line) are always quantised to the 32-step grid. The first lets you draw traditional step sequences, much like the Curve mode in Reason’s Matrix device. The second lets you draw point-to-point straight lines when Free mode is off. In Free mode, the Line tool is the closest thing to free-hand drawing. In either mode you can click per step for breakpoint-style drawing with a resolution of 1/16 notes. 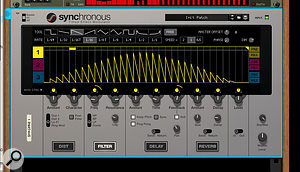 Screen 3. Mod depth modulation can be baked into the curve by simply varying the peaks.As you’ve probably gathered, it’s hard to describe the drawing system in Synchronous, but it makes sense after some experimentation. As well as giving you options to define custom shapes, it lets you easily create modulation sources which are themselves inherently modulated. For example, Screen 3 is like a sawtooth LFO with its own depth modulation and rate modulation.

Let’s turn our attention to the audio effects in Synchronous. Incoming signals route serially through the four effects in the order they appear on the panel, although a Post Filter button on the initial Distortion stage lets you swap these first two modules around. Each effect has two or three key parameters that can be modulated by the curves. Modulation is applied by focusing the desired curve in the top display, then dialling in a positive or negative amount on the adjacent ‘Mod Ctrl’ knobs. You can add varying amounts of mod from each curve, with the values indicated in colour around the knobs.

The Distortion section offers four types: two traditional overdrive tones (Dist 1 and 2), Lo-Fi and Ring Mod, with modulatable Amount and Character controls. In the first two modes the Character knob boosts the upper mids. Lo-fi is a sample-rate reducer, with the Character knob setting the sample rate, while the Amount appears to be a mix of the original and crunched signals. In Ring Mod mode the Character knob controls the frequency, so offers the greatest potential for modulation fun.

The Filter has Low, High and Band modes, with 24dB, 12dB and 6dB slopes. There’s also a Positive Feedback Comb mode which is particularly ripe for modulating. Unsurprisingly, the filter is the most obvious and effective place to start rhythmically sculpting sounds through Synchronous. I particularly like the Lag control. This has a kind of damping effect on modulation applied to the cutoff frequency, adding some glide time that smooths out sudden jumps in the mod curve. With high resonance this gives a lovely teebee-style squelch.

The delay unit inside Synchronous (Screen 4) turns out to be a hidden gem! On the face of it it’s a pretty standard delay, with Sync and Ping Pong options, and with the Amount, Time and Feedback controls ready for curve modulation. However, it has some really nice extras, chief among which is the Roll mode. When the Roll button is engaged, turning up the feedback also turns down the input, resulting in a frozen feedback loop at the maximum setting. 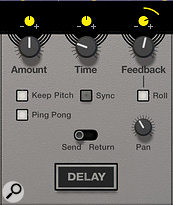 Screen 4. The Delay effect’s Roll and Keep Pitch modes offer loads of creative mangling opportunities.This leads to loads of real-time mangling, stuttering and loop-freezing fun. By quickly turning the feedback down then up again you can ‘grab’ a chunk of audio that’s as long as the current delay time, then mess with it using the Time control. And as you can modulate both these parameters from the curves there’s tons of unexpected results to be had. The Time control has an interesting mode switch: Keep Pitch. This stops the usual varispeed effect that you get when changing the delay time on the fly, and gives a completely different character when playing with Roll mode.

The Reverb is quite simple, but has surprisingly interesting results when modulated. In Send mode it’s fun to fire bursts of signal into the reverb. I also enjoyed shaping the output with Decay modulation, which gives a more organic variation on the gated reverb effect because you’re dynamically changing the reverb’s time rather than just its level.

I said there were four effects, which is true, but there’s also a final Level module that is highly useful. This can really help to emphasise filter and distortion modulations by adding an amplitude envelope, or can stand alone as a stutter or tremolo effect. There’s an In/Out switch which determines whether amplitude modulation happens before or after the other effects, and therefore makes a huge difference to the results.

I’m kicking myself that I didn’t explore Synchronous sooner, and I have a feeling it’s going to be a staple in my rack from now on.