PreSonus Studio One Tips & Techniques
By Larry the O 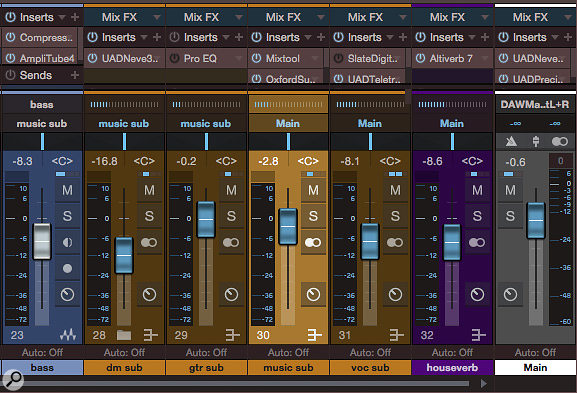 Screen 1. Bass, drums and guitars are all routed to a ‘music sub’ bus to be ducked by the vocal submix.

Get your Studio One ducking techniques in a row as we explore different ways to improve vocal intelligibility.

Your drums, guitars, synth pads, organ tracks and brass samples are all nicely balanced, but the vocals keep getting lost in places. Automating the vocal level to sit it on top of the mix, adding brightness with EQ, and beefing up the compression are all options, but none of them is a silver bullet that works in all situations. When other methods fail, I frequently turn to ducking, something I have written about before in this column. This month, I discuss different ducking techniques, how they can be set up within Studio One, and how they can be stored as presets.

The core idea of ducking is to trigger gain reduction of one or more target signals whenever a source signal (in this case, the vocal) is present. If the aim is to improve intelligibility, there are several considerations that need to be taken into account. The first, obviously, is what the target signal(s) might be. I have found, in practice, that only occasionally is there a single culprit causing the problem. More often, several tracks make contributions at different times and to different degrees.

Wanting to treat a number of tracks at once, I turned to submixing through bus channels, something I do extensively in my mixes anyway. In fact, it turns out that I most often end up creating a submix of everything except vocals and ducking that, which is how this month’s examples are set up. If you work regularly in one musical genre, you may be able to find some consistency in ducking targets, but I work across multiple genres, including spoken word with music and effects, so my targets vary with the context.

My first example is the simplest and most straightforward. As mentioned, I create a bus channel and call it ‘music sub’ or some other name suggestive of an overall submix (Screen 1). Vocals nearly always get their own submix.

This makes everything very straightforward. First, insert a compressor on the music sub bus channel. I’ve used Studio One’s bundled Compressor plug-in here, but you can use any compressor with a side-chain input that shows up in Studio One. Not all do, so you just have to instantiate the plug-in and see if you find a side-chain in the next step: create a new send on the vocal submix channel to the side-chain of the compressor. Hover over the Sidechains entry at the bottom of the Sends drop-down menu, and a sub-drop-down of available side-chains appears, from which you make your choice (Screen 2). 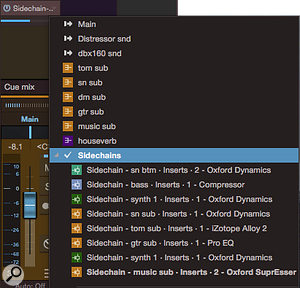 Screen 2. The Sidechains sub-menu at the bottom of the sends drop-down menu shows all available processor side-chains. Note the Oxford SuprEsser side-chain at the bottom of the menu.The compressor on the music sub is now responding to the level of the vocal submix. As a consequence, you can only usefully adjust the ducking settings when the vocal is active. While broadcast applications commonly use lots of gain reduction when ducking, I am typically looking for this ducking to be transparent, so I set the compressor to a low ratio (2:1 or less) and the threshold such that no more than 2dB of gain reduction occurs. Attack time should be fairly short, but set it too short and it becomes audible; similarly with the release. If there are effects on the vocal, the compressor release may need to be lengthened. With the right compression settings, you should not even really notice the rest of the mix getting ducked for the vocals, and vocal reverb will hide it even more.

My storytelling show, Ears Hear Now, features spoken word accompanied by a dense soundtrack of music and sound design. Generally, the narration has no effects beyond a touch of reverb, so the voice stays mostly in the centre. This fact led me to develop a ducking technique in which I use mid/sides processing to duck only the centre of the music sub signal when the voice is present, clearing a little room only where it is most needed.

Studio One’s channel editor makes it easy to encapsulate this entire process within the target channel, without need for additional bus channels or other resources external to the target. Better yet, once constructed, the entire circuit can be saved as an effects chain that can be instantiated again with a single drag-and-drop gesture. 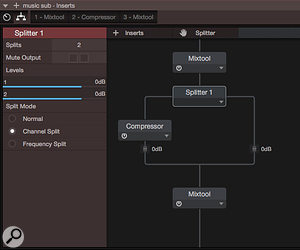 Screen 3. Signal flow in the channel editor for mid-signal ducking of the music submix. Note that the splitter is set to split the signal into left and right channel signal paths, which the Mixtool before it has turned into mid and side signals. The compressor is on the mid signal only. The bottom Mixtool converts back to left/right format.Screen 3 shows the signal flow. Both Mixtools are performing the same function: M/S transformation. The top Mixtool converts the left/right signal to mid/sides. The splitter is set to Channel Split mode, so the mid signal rolls left and the sides signal is on the right. The compressor is set up for ducking as described in the last section, after which the mid/sides signal is transformed back to left/right by the lower Mixtool.

This variation also works well in song applications. Once it is all set up, position the cursor over the Inserts legend and, when the cursor turns to a hand, drag to the FX Chains folder in the Effects pane of the browser. You can right-click on the resulting file and rename it to something relating to its function; I called mine ‘Mid ducker’.

Note that the side-chain connection must be established every time you instantiate this effects chain. That is, once you drop the effects chain onto the target channel, you must go to the vocal channel and create a send to the compressor’s side-chain. It will not (and could not) be created automatically.

Ducking an entire mix, even just the mid signal, to make room for the vocal is a purely level-based approach; however, sometimes track balances are basically fine, and the problems are being caused by masking within specific frequency ranges. I tried to attack that situation using frequency-specific ducking, but this proved harder than I expected.

My first notion was to use a de-esser, but few de-essers allow external side-chain access, and many de-essers provide frequency-sensitive, but not frequency-specific, compression — that is, they are broadband compressors triggered more readily by sibilance frequencies than other frequencies. However, I found at least one notable exception in the very flexible Sonnox Oxford SuprEsser, which will compress only a specified band of frequencies, and which provides side-chain access. I set the SuprEsser’s filter lower than most sibilance frequencies, sometimes to presence frequencies, sometimes around vocal fundamental frequencies, and it works quite well. Most often, I combine it with the mid/sides technique above, substituting it for the PreSonus compressor plug-in.

A method I thought would work well was to instantiate a multiband compressor and duck only the intelligibility range, but none of the multiband compressors I tried allowed side-chain access; certainly Studio One’s multiband doesn’t. Drat! [This is possible with FabFilter’s Pro-MB — Ed.]

Perhaps the idea could still be accomplished using Studio One’s channel editor. I tried ducking the intelligibility range using phase cancellation, in a scheme where the vocal gated a band-pass-filtered signal which then was reversed in polarity and summed with the original signal. This sort of worked, but no matter how much tweaking I did on the settings, I never got a really usable response. Maybe I could with more work, but I just reach for the SuprEsser for this technique.

Ducking is a far more powerful technique than many think, especially when lightly but strategically applied. Simple ducking takes little work beyond creating an appropriate target submix, while Studio One’s effects chain feature enables the more sophisticated mid-channel ducking approach to be stored as a preset that can be quickly dragged into a session. Frequency-specific ducking can be achieved, but not so easily as we’d like. Try these techniques any time one signal is obscuring another and simple mixing isn’t fixing things. 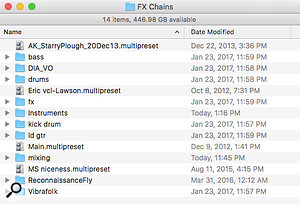 Screen 4. Effects chain presets can be organised directly in the Mac Finder or Windows Explorer. The FX Chains folder is inside your Studio One documents folder. You can create folders, rename presets and move them into the folders.As with all presets, if you don’t stay organised, your effects chains will do you no good because you won’t be able to find or identify them. Rename effects chains as soon as you make them, and organise them into subfolders. User effects chains are stored in your Studio One documents folder: specifically, in the Studio One / Presets / PreSonus / FX Chains folder. You can access this folder from the browser’s Files pane, or directly from the Mac Finder or Windows Explorer.

Factory effects chains are not stored in this location; they are not intended to be accessed by users, though they can be with a bit of work. It would be nice, for instance, to store my Mid ducker with the factory mixing effects chains, but doing so is a bit of a pain. However, I found that if I create a folder called ‘mixing’ exactly as the factory folder is named, in my user presets folder, when I refresh the presets (right-click in the browser and choose Refresh), my effects chain shows up in the same mixing folder as the factory effects chains. That works out kind of OK.