This quirky instrument's versatility is making it popular — but how do you best record it? 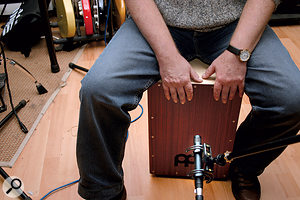 If you've ever seen a percussionist sitting on a small wooden tea chest, beating out rhythms on its surface with hands or brushes, the chances are that the chest was a cajon. Originally an improvised instrument made from packing crates, the cajon has been used for traditional musical forms in various cultures, including flamenco, Afro and Cuban music, but its portability and modest volume has also made it popular with other musicians.

The modern cajon looks more stylish, but it remains little more than a wooden box. Five sides are strong and stiff, and the sixth 'front' side, made of a thinner material (usually plywood), forms the playing surface. A sound hole similar to that on an acoustic guitar is cut into the box's rear, to allow some low-frequency projection. Most versions also include a snare, often made from tensioned guitar strings fitted inside the box and in contact with it, so that you can hit in different places to achieve either a deep bass thud or a pseudo-snare sound. This ability to approximate the sound of a basic drum kit has no doubt contributed to its current popularity. 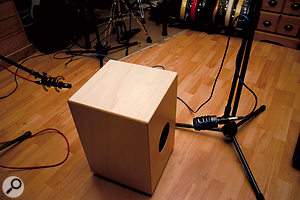 In practice, a simple front and rear two-mic setup can work well.

So how do you best record this unusual instrument? As always, start with getting the sound of the instrument right. By placing the cajon close to a wall or corner you can use the boundary effect to help add power to the low end, and playing on a reflective hard floor results in a more lively sound than recording over carpet.

When it comes to miking, it depends on how you approach the track. If you're in the studio and are miking only the cajon, you can use a single, distant mic (a full-range capacitor will usually be best) to capture its natural sound. This would be equivalent to recording a traditional drum kit with a single room-mic, as the room character contributes a lot to the sound.

More likely, the cajon will be played as part of an acoustic or semi-electric ensemble, in which case close-miking is often the only viable option. (Even then, some spill is likely, unless you have access to a booth or isolation screens.) Correct positioning of the mics can be tricky, as the player sits on the instrument and partially obscures it, but the system I've settled on gives perfectly acceptable results, and allows a degree of flexibility when mixing and processing.

To capture the low end, a kick-drum mic or full-range capacitor model is placed behind the box 'looking' towards the sound hole. To avoid the result being too boomy, I offset the mic so that it points towards the hole from one side at an angle of around 45 degrees, and is placed around 20cm away from the box.

To capture the sound from the front surface, a cardioid capacitor mic serves perfectly well, with the best position (to my ears) being just below the top edge of the box, angled downwards so that it aims at the centre of the playing surface, between the player's legs. A distance of 30-40 cm is usually fine, but the most important considerations are that the mic gets an unobstructed view of the playing surface, and that the player isn't likely to hit the mic.

The complete sound is obtained by mixing the two signals, but as the rear mic faces the opposite way to the front one, you need to flip the polarity of one of the signals. Otherwise, while you may still get a vaguely usable sound, you're likely to lose tonal depth at the low end, due to phase cancellation. I also prefer to record the two mics to separate tracks rather than as a stereo pair, as this makes processing far easier.

By way of processing, you can take the minimalist approach, using only such EQ as is necessary to make the recorded sound match the acoustic sound closely, or you can take the close-miked-drums approach, processing each signal differently to emphasise the kick- and snare-like qualities. This might include using a compressor with a 10-20 ms attack time to emphasis the hit of the front surface, and the use of high-shelf EQ or a harmonic exciter to brighten up the snare sound, or to give more definition to brush playing. You could also use a gate or a Transient Designer to tighten the bass sound if the recording sounds too boomy, although optimising the mic position is invariably a better option. The resulting sound is usually lively enough not to need much in the way of added reverb, but an ambience treatment from a convolution reverb will often help to give the sound a sense of place.