Before version 6 came along, Reason was not exactly over-endowed with dynamics processors, and it had no gates at all. But gates are very useful for both 'utility' functions and creative use, and Reason 6 has made good the omission. Getting started could hardly be easier, as there's now a gate on every single mixer channel in Reason 6.

Having a compressor and gate on every channel is one of Reason's most grown-up features. The gate is quite sophisticated, too, with a side-chain input and plenty of parameters to play with.

My number one use for gates, and probably most other people's too, is in cleaning up multitracked drums and percussion. You know the kind of thing — you close-mic all the individual drums in a kit, but all those mics still pick up unwanted spill from other drums, and that can make getting a good sound difficult. In particular, it can be hard to achieve crispness and focus, especially if you're after a really tight, dry effect. Here, gates come into their own. Used on the individual drum channels, they only allow signal to pass when each drum is sounding. The rest of the time the gate is closed, silencing the spill. Let's work through an example.

'Keying' or triggering a gate from an audio signal elsewhere in Reason is quite straightforward. First, connect an FX Send to the gated channel's side-chain input. Then enable the send (and set it to pre-fader mode) in the mixer. Finally, adjust the channel's gate section to suit your needs.

2. In the mixer, solo a channel — try a snare channel for starters. In the dynamics section, click the On button in the darker grey Gate section.

3. Turn the Range knob all the way to the right (we'll look at how this works in a minute).

4. Now adjust the Thres (Threshold) knob, while watching the gate's five-part gain-reduction meter, and listening. You're trying to find a threshold level where the gate opens for all the hits you want to hear, but closes for the spill and room noise in between. It helps to remember that lights on the level meter show that the gate is partially or fully closed. If there are no lights, it's open.

Often, these few steps will be all you need to get a good result. But there are many more parameters and options available for tailoring the effect.

Let's go back to the Range knob. When it's turned all the way to the right, Reason's gate operates in a simple way that's quite easy to understand: the gate is essentially either open or closed, letting signal pass or not. However, set the Range knob anywhere else and the gate won't attenuate the signal so much — the gate won't completely close. Try playing a snare track again but decrease the Range setting. As you do, you'll hear more and more signal coming through between the hits. Eventually, when you turn Range all the way down, the gate won't close at all — it'll be like it's turned off. Interim settings can help to retain a sense of naturalness, and also deal with the worst of the unwanted spill without completely blitzing some low-level detail.

For some drum hits, you might need to engage the Fast button. This causes the gate to open quicker when triggered — in a matter of microseconds rather than milliseconds — and helps to preserve the crispness of attacks.

Meanwhile, the Rel (release) parameter governs how quickly the gate closes, and effectively controls the decay phase of the drum sound. Keep it low to makes drums really short and snappy, but set it higher to allow them to ring on a bit. The Hold parameter has a similar effect, but extends the time for which the gate remains fully open after each drum hit. Raising it a bit can help with drums like low tom‑toms, where you probably want to retain the natural decay sound for longer, before the Release phase kicks in. It can also prevent the gate from 'chattering' when using very fast release times.

Gates aren't only for cleaning up drum-kit recordings: they can also be used creatively. For example, you could use a gate on a sustained synth-pad sound, but trigger (or 'key') it to open and close from another track in your mix. That's possible because of the dynamics section's side-chain input. Suddenly that pad sound won't be quite so sustained any more, but starts to pulse rhythmically in time with the other track. In the following example, I've used a snare-drum track to provide the rhythmic key source.

The first step is to make the necessary audio connections. I need to get that snare drum to the synth channel's side‑chain. The easiest solution is to pick up the drum signal from a send in the mixer, so then it's as simple as dragging a cable from a Master Section FX Send socket to the Dynamics Side-chain input on the synth Mix device. You'll find the same side-chain inputs on audio track devices, by the way.

Alligator works well when paired with a Matrix sequencer (or three). You can use Matrix's Gate CV pattern sequencing to trigger Alligator's gates.

Next, some settings in the mixer: Start by enabling the send you just connected on the drum channel. Click the number that corresponds with the socket you chose, and raise the send level to something around 0dB. I'd recommend engaging its Pre (pre-fader) mode too. Then the send level won't be affected by changes to the drum channel's main level fader. You could even mute the snare track if you didn't want to actually hear it. 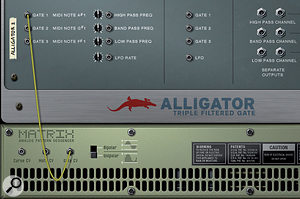 Alligator excels as a preset wonder and as a playable programmer's dream. Either way, it's all about rhythmic gated effects.For the next bit, I'd suggest playing your song, so that you can adjust settings by ear. On the synth-pad channel, switch on the gate in the Dynamics section. You'll notice that the Key button next to the gain-reduction meters is lit, indicating a connection to the side-chain input. Now turn the Range control right up, as I described earlier. This ensures that the gating effect is at its most pronounced, and makes setting up easier. Adjust the Threshold control until the gate begins to open and close in time with the drum signal. Finally, adjust Release and Hold times to taste.

That's the basic keyed-gate effect. You can tweak it by playing with the Range level, which can add what almost sounds like a reverb effect at times. Also try switching on the synth channel's compressor. With a bit of tweaking, you can achieve a more percussive effect, or one with more obvious pumping.

Alligator is one of the nicest new additions in Reason 6. It's one of those devices you can use any number of sources and get nice, inspiring and sometimes unexpected effects.

The way it works is by splitting an input signal into three, and then passing each of the resulting signals through a gate (triggered by an onboard sequencer with 64 preset patterns), a resonant filter (either a high, low or band pass), a drive stage, phaser and delay line. On top of that, there are all sorts of modulation options and pan/level mixing possibilities.

It requires some will-power to progress beyond Alligator's presets, but it's worth doing if you're into gated effects. To show you what I mean, we're going to look at a couple of really simple, though perhaps unexpected, ideas.

Try creating an Alligator as an effect for a sustained sound — maybe strings, a synth pad, or possibly even a held vocal line. Then right-click an empty part of Alligator's panel and choose Initialise Patch. If you play your song now, you get a really simple, repeated gated pattern (pattern 0) that plays through all three filters simultaneously. You can sculpt the 'shape' of each gated event with the Amp Env section at bottom left, varying it from little staccato chirps to subtle shimmering.

But now try turning Alligator's Pattern section off — trust me on this one! Right click Alligator again and choose Create Track for Alligator. Select this new track in the sequencer, and record-enable it if it isn't already. Now, from your MIDI controller, playing the notes F#1, G#1 and A#1 trigger the three gates individually. The gates are velocity sensitive too! It means you can simply play (and record) any gated pattern you require. If Alligator's filters are getting in the way, simply turn them off by clicking their On buttons. Then you need only play one of the gates to get a full frequency-range signal.

There's another way to trigger Alligator's gates too. Create a Matrix Pattern Sequencer, and drag a CV cable from Matrix's Gate CV output to one of the Alligator Gate CV inputs. In the Matrix, click to write some gate events in the lowest part of its sequencer display. Then, when you hit Matrix's Run key, or play your song, that pattern triggers Alligator.