The launch of Intel's new Sandy Bridge processors hasn't gone as smoothly as it might have done — and the saga continues...

Last month, despite the huge potential of Intel's new 32nm Sandy Bridge processors and associated motherboards, I ended up having to report various frustrating aspects for the PC musician. These ranged from occasionally poor PCI audio interface performance on some motherboards to radical changes in low‑latency audio performance between motherboard BIOS revisions.

Water Under The Bridge?

Well, sadly the waters got even more muddied when, on 31st January, Intel admitted to a design problem in revision B2 of their Cougar Point chip sets. These are found on Sandy Bridge motherboards, and the fault might eventually result in data problems with the four SATA 2 ports after a couple of years of 'normal' use. Since the two SATA 3 ports remain unaffected, many SB laptops and notebooks and simpler SB desktop systems with only two drives remain totally unaffected, and are still being sold. 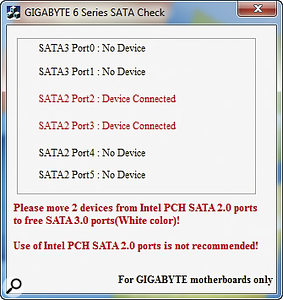 This free utility from Gigabyte will inform you if your Sandy Bridge motherboard is one of those that may require a free replacement in due course.However, fortunately even those SB systems that do use SATA 3 ports should remain perfectly functional until replacement motherboards become available, since Intel project that the design flaw is only likely to result in about five percent of failures after five years use. As I write this a week into February, Sandy Bridge motherboard availability is beginning to dry up, although, to their credit, Intel have already fabricated modified chips, arranged return procedures for all affected products, and are desperately attempting to get their shipping quotas back to normal by the time you read this in mid‑March.

Most PC audio specialists have stated that anyone who has already bought one of their SB computers will be able to send it back for motherboard replacement and have it returned within about a week, for a nominal shipping charge.

If you've recently bought a Sandy Bridge system, you can check whether or not it's affected by downloading the Gigabyte 6 Series SATA Check utility (www.gigabyte.com/support‑downloads/utility.aspx?cg=2). Despite its 'Gigabyte‑only' display, this is said to work with other manufacturers' motherboards.

Intel have admitted that their revenue is likely to be $300 million down in the first quarter of 2011 because of this unforeseen problem, while AMD are already rubbing their hands with glee at the increased interest shown in their Fusion APU (Accelerated Processing Unit) range, which incorporates a powerful, ATI‑based, 3D graphics engine and is being touted as the 'green alternative', due to its small carbon footprint.

The Sandy Bridge processors also provide excellent performance per watt, as well as very low idle power‑consumption levels, making them a good choice for those who want a more efficient computer that can remain extremely quiet and cool when resting, but has plenty of power in reserve. Mind you, there's no need to write off Intel's previous tried‑and‑tested chip set just yet: accompanied by a Core i7, 950-series, 3.06GHz processor, the X58 chip set still produces many benchmark results that are neck and neck with a Core i7, 2600K, 3.4GHz Sandy Bridge system.

The first service pack for Microsoft's Windows 7 and Windows Server 2008 R2 will be available by the time you read this. It contains no new features relevant to the musician, but does have a raft of security patches and other fixes, including the previous updates delivered over Windows Update. It should be downloaded and installed by all musicians running this latest PC operating system.

Microsoft has also shipped the release candidate of its Explorer 9 browser. With a minimal‑looking interface reminiscent of Google's Chrome browser, it's apparently designed to be 'less intrusive' when viewing web sites, but the two most‑highlighted features are increased privacy and speed. It remains to be seen whether or not this latest release encourages those who have already abandoned Explorer in favour of Firefox, Chrome, Safari or Opera to return to the fold. 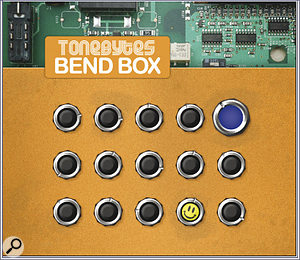 Here's your chance to experiment with circuit bending without risking your favourite synth, courtesy of Bend Box from Tonebytes.

Paul's Extreme Sound Stretch: If you fancy entering a whole new world of macro sound manipulation, why not give the latest 2.2 version of this powerful, yet freeware, stand‑alone Windows-only utility a try. While most time-stretching algorithms begin to sound dodgy once pushed to 200 percent and beyond, this one comes into its own at more extreme settings with a maximum time-stretch value of 10,000 percent! It's a great tool for creating new pads and soundscapes from existing samples. To get the idea, have a look at the 800-percent stretched Ellie Goulding YouTube video (www.youtube.com/watch?v=aIj1XKm8Lqw).

ToneBytes Bend Box: Ever fancied having a go at circuit bending? Well, now you can without risking your health or your favourite synth, courtesy of the freeware Bend Box VST Instrument from ToneBytes. It emulates its hardware equivalent by connecting variable controls between various random points in the 'circuit' that interact in unpredictable ways, and is nearly as much fun. Just drop its DLL file into your VST plugins folder and start tweaking its 15 unmarked knobs to see what new sounds you can discover. Go to http://tonebytes.com/bend-box for more information.