The Practical Craft of Recording By Mike Senior 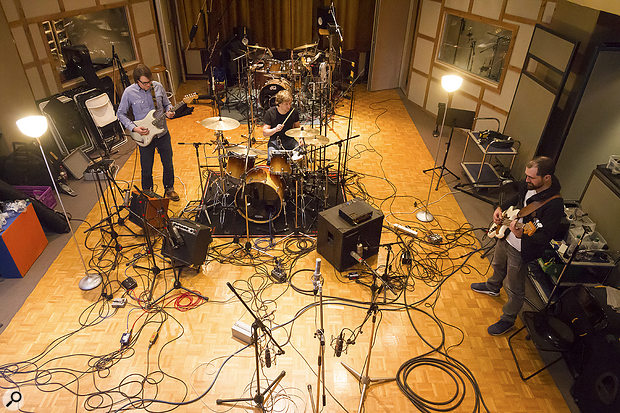 Recording a band together holds many advantages for a session's workflow, sonics, and general mood — and it can still leave a surprising amount of scope for corrective editing if you wish.Photo: Daniel Plappert

Our engineer has the rare chance to compare an overdubbing approach with a band-in-the-room recording — and the winner is clear!

It often seems to me that project studio recordists are a bit cagey about recording bands all together at the same time, preferring instead to 'play it safe' by tracking drums first, and then overdubbing the other parts on top. An understandable reason for this reluctance, I think, is that the benefits of all‑in‑one‑room recording can appear a bit nebulous compared with the clear advantages of overdubbing — namely that any part can be re‑recorded, edited, and processed independently after the fact. So in this month's Session Notes, I'd like to provide some concrete arguments for the all-at-once approach, by way of some unusual recordings I was able to make on a recent rock-trio tracking date.

To Overdub Or Not To Overdub?

The session in question is the one that I described in much more detail in last month's Session Notes (https://sosm.ag/sn-multi-purpose-recordings). In that article, I explained how I designed the miking setup specifically to give lots of mixdown options, even though the drummer, bass player, and guitarist were all set up within a few feet of each other in the studio's main live room. Just to recap briefly: all the drums and cymbals were close-miked (the kick and snare with two and three mics each, respectively); a main stereo 'overhead' pair was supplemented by three separate sets of stereo room mics; the guitar amps were all multi-miked (two mics for bass, three mics for guitar); and a DI feed was also taken from each guitar.

Something else that made this session particularly special, though, was that I had the chance to record several backing tracks in two different ways: firstly with the band all playing at once; and secondly by recording the drums against a click track, and then overdubbing the bass and guitar. Crucially, the recording setup remained identical for the two versions, which means that you get to hear just the sonic impact of the different working methods. On the SOS website (https://sosm.ag/session-notes-0519-media) I've uploaded the same basic mix of each of these backing-track recordings, using identical processing in each case. I've deliberately kept the mix processing fairly minimal, using a total of just 14 filters, two bands of EQ, and two compressors across the 24 tracks of audio. I've also bounced the drums and bass/guitar submixes separately, so it's easier to hear the degree of interaction between the instruments in each instance.

The first thing that strikes me about the live-ensemble takes is that they just feel more exciting, and I think there are several reasons for this. The first is simply that the musicians much preferred performing in the same room together, so they were much more inspired while working that way, and that sense of inspiration 'stuck to the tape'! From a more technical perspective, another factor is that, without the click track holding the tempo in check, the band naturally settled into a slightly faster (and arguably more appropriate) tempo when playing together. But this isn't the only way the performance changed, because if you compare the two drum submixes, the drummer also clearly plays the snare more forcefully when facing in-room competition from the guitars — even taking into account that the snare's tuning changes slightly between the takes.

There are plenty of other differences between the live and overdubbed approaches from a purely sonic perspective. For a start the spill from the amps onto the drum mics in the full‑ensemble recording makes the bass feel appreciably warmer tonally, as well as both widening and blending the guitar so that it feels more 'glued' into the mix. It's worth pointing out, though, that the spill doesn't by any means make the bass or guitar sound washed out (a frequent concern about this scenario amongst project-studio engineers), despite the instruments being so close together. Indeed, it's precisely the close proximity of the instruments that makes it possible to record up‑front-sounding takes in this way, as I explained in my previous column.

What most interests me about the change in sound here, however, is the alteration in the snare timbre, which feels generally richer and more sustained in the live-ensemble take, even though the guitar and bass close mics are picking up so little drum spill — as you can hear if you listen to the guitars submix on its own. My theory here is that the physical vibrations of the amps in the room are setting up sympathetic resonances in the drum kit, overlaying an extra layer of sonic complexity that isn't there when the drums are recorded on their own.

Yes, But What About Editing?

Another concern for a lot of project-studio recordists seems to be that they'll lose all their editing flexibility if they record the whole band at once. Again, I think this is something of a paper tiger, because it's standard practice to do several takes when recording in this way, and those make it surprisingly easy to remedy performance slip-ups. The main thing you have to bear in mind as a general rule of thumb is that you should edit across all the recorded tracks at once, so that the phase relationships between the different signals remain intact. Despite this proviso, there's masses you can do on a project like this, because you can usually edit almost invisibly between takes just before any drum transient. And this doesn't just mean stitching together large song sections from different takes — I regularly use this technique to replace isolated kick and snare miss-hits, or correct erroneous bass notes and guitar chords, for example. 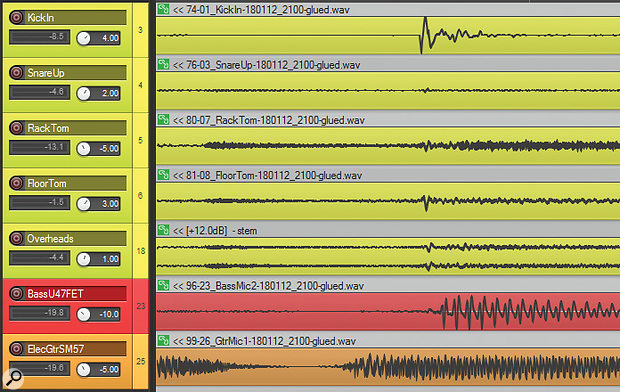 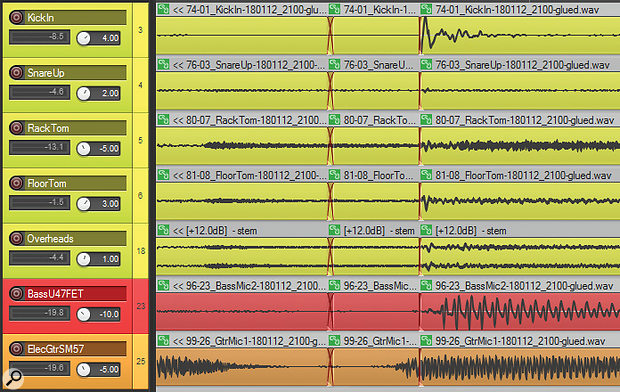 There's also nothing to stop you editing timing in considerable detail. Again, this is something I frequently do to tighten up moments of live band takes, and I once even grid‑locked an entire drum performance to emulate a mechanical disco vibe. All it takes is a short crossfade between hits (preferably as close as possible before a transient) to disguise such edits most of the time. And let's say you wanted to correct a guitar strum that begins a little early, slightly anticipating the downbeat kick-drum hit. If you sliced both before the strum and before the kick hit, you could slide the offending audio later in the timeline to achieve a tighter-sounding downbeat — as illustrated in the screenshots.

But that's just the backstop, because in this specific situation I could go much further if necessary. Since the guitar and bass tracks have so little drum spill on them, I could often get away with patching up isolated mistakes in either part without maintaining the phase-lock between the recordings — in other words, by doing edits on the guitar or bass signals without also editing the rest of the ensemble tracks. Yes, there'll be a little disagreement between the guitar/bass spill and their close mics, but in practice this is unlikely to distract the listener within the context of the mix. But don't take my word for it, because I've also uploaded a series of example audio files demonstrating a variety of the edits I've mentioned, so you can judge how they sound for yourself!

Feel The Fear & Do It Anyway

So while I realise that the idea of recording a whole band at once can seem intimidating, especially to those starting out with recording, I hope I've been able to demonstrate why you should totally give it a shot. Moreover, besides the psychological and sonic benefits I've detailed above, capturing a whole ensemble's performances simultaneously is typically a much quicker way of working too — and no-one ever complains about finishing ahead of schedule!

You can download a Zip file of hi‑res WAV audio and MP3 examples in the righthand Media sidebar or use the link below.

We've also created an accompanying Audio Examples page so you can read extra notes Mike made, while listening yourself with the SoundCloud players.