Side-chain compression can be the difference between a flat, lifeless mix and an adrenalised floor-filler. Learn how to capture the French house sound, and add an extra little twist. 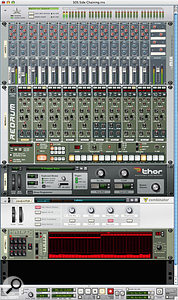 With some simple instrumentation in place, we're ready to experiment with this month's production technique — side-chain compression.Keying a compressor with the kick drum is a widely used mixing technique in many types of music, but the extreme to which it is deployed by certain French house music producers has fostered a strong association between the trick and this sub-genre. Check out the likes of Modjo, David Guetta and, of course, Daft Punk and you'll get the idea. Daft Punk's 'One More Time' is a very well known example of what is essentially a 'ducking' technique. Every beat of the kick drum pulls the rest of the mix down, causing the whole track to pump rhythmically around the kick.

In this month's workshop, we'll put together a simple house track that uses the side-chaining trick, and then take it one step further. OK, Reason racks at the ready. The screen to the left shows the first step in creating my song, which is a Redrum drum machine. I've kept the default drum kit (Disco Kit RDK), but replaced the Kick drum sample with something suitably big and solid. To do this yourself, click the folder icon above Channel 1 in the Redrum, then navigate to the folder at Reason Factory Sound Bank / Redrum Drum Kits / Xclusive drums-sorted / 01_BassDrums. I've chosen my all-time favourite FSB kick drum: 'BD_Congas.WAV'.

Next, I've created a pattern with good old four-on-the floor kicks triggered at steps one, five, nine and 13. I've added the usual snare hits at steps five and 13, and then a smattering of hi-hat and egg-shaker hits. To finish off my basic beat, I've added a little life by switching on Redrum's Shuffle button, and turning the Global Shuffle knob to around 55 percent in the Regroove mixer (if you're not familiar with this, don't worry, we're going to be looking at it in detail in the next instalment of this column).

Before we can play with the side-chaining technique, we need some more elements. As in the screen on the previous page I've added a Thor, which is playing a sequenced synth bass, and a Combinator, which is providing a simple pad. You can make your own, or follow the next section to retrace my steps. 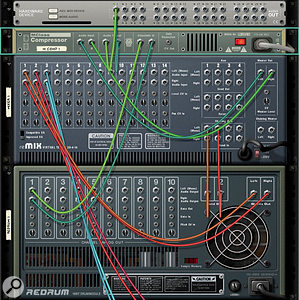 A compressor sits across the whole mix, and the kick drum is connected as a key input; but we're not quite done yet. 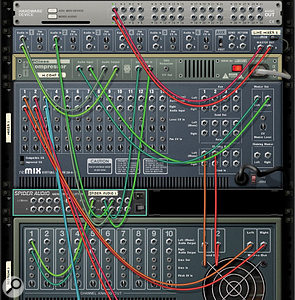 The finished patch, with the kick drum split off and routed back into the mix.Starting with the Thor, I chose a preset FSB patch called '3-Stepper Bass'. This is the first patch in the Thor/Sequenced folder. You'll need to open Thor's control panel by pressing the 'Show Programmer' button; then you can hit the 'Run' button on the built-in sequencer to hear the bass line. For the pad, I created a Combinator and loaded the pad preset 'Lullaby'. I then added a Matrix step sequencer and generated a simple two-note sequence.

You now have the basis of a song to experiment with. Take a moment to balance the levels of the three tracks running into your mixer. The next step is to add the compressor that we'll use to duck the mix. Select the Hardware Interface module at the top of the rack, and choose Create / MClass Compressor. This will automatically cable the compressor in between the main outputs of your mixer and the hardware interface. You should be able to hear that your entire mix is now being compressed slightly.

Flip the rack around (Tab), and take a look at the back of the compressor. You'll see that in addition to the main audio input and output connections, there is a stereo pair of side-chain inputs. As soon as you connect an audio signal to these inputs, the compressor automatically switches to side-chain (also called 'external key') mode, and the compressor's response will be based on this input instead of the main inputs.

We want to trigger the compressor from the kick drum, so we need to separate the kick from Redrum's main output. While still looking at the rear of the rack, locate Redrum's Channel 1 audio outputs, and drag a cable from the left (mono) output to the left side-chain input on the compressor (as in the screen right and above). The main thing you will notice at this point is that you can no longer hear the kick drum.

Turn the rack around again and look at the compressor's front panel. You should see that the gain-reduction meter is showing a few dB of reduction on every beat, corresponding to the kick-drum hits. However, it's probably not enough to make much of an audible impact. Turn the Threshold control to somewhere around -25dB, and the Ratio control up to about 16:1 or higher. There should no be no mistaking what's happening now: the entire mix is ducked rhythmically in time with the (currently inaudible) kick drum.

We now need to reinstate the kick, but we don't want it to get compressed with the rest of the mix. We need both to split the kick signal and bypass the main mixer. First, select the Hardware Interface at the top of the rack again, then choose Create / Line Mixer 6:2. This will add a Line Mixer above your main mixer, with no cabling. Now we need to re-route the mixers so that the Line Mixer's outputs replace the original mixer going to Reason's main stereo output, while the original mixer instead goes to channels 1 and 2 of the Line Mixer. 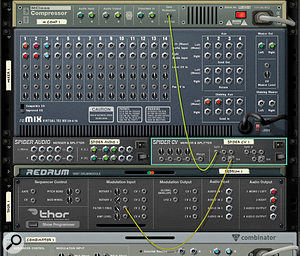 A modern variation on a classic technique. The compressor's CV out lets you use the key input to modulate just about anything.To split the kick, start by selecting the Redrum and creating a Spider Audio Merger & Splitter. Send the kick output into the splitter, then patch it into the compressor's side-chain inputs and a spare input on the Line Mixer. If your cabling matches the screenshot at the bottom of the previous page, you should now hear the full mix and the separated kick with the side-chaining in full effect. Each time the kick sounds the rest of the mix 'gets out of the way' making the kick sound much louder. Try bypassing the compressor to hear the difference. It's hard to believe that the kick is at the same level with or without the compressor.

With the basic effect set up, you can now tweak it using the compressor's controls. The Threshold and Ratio control set how aggressively the mix is ducked: anything from a subtle rhythmic throb to extreme pumping. The Attack and Release controls set how fast the mix is pulled and pushed every time the kick triggers the compressor. Too fast an attack will flatten and distort the mix; too slow and the effect is diluted because the kick has come and gone before the ducking. With a fast release, you get the accentuation of the kick but with less noticeable effect on the rest of the music. Choose a longer release and you'll hear the rest of the mix pumping more. Adjust to taste based on the effect you want and the tempo of the music.

Another factor you can play with is the length of the kick-drum sample. This has a strong impact on how the rest of the music is pumped by the compressor. Try adjusting the Length knob on Redrum's Channel 1 to really home in on the groove you're after. You can also automate this as an effect in the song. Try starting with length at zero and slowly raising for a unique build.

So far we've employed a traditional ducking technique that uses a compressor to adjust the level of one signal based on the level of another signal. We're essentially generating an envelope that is formed by the amplitude envelope of a kick-drum sample, modified by the Ratio, Attack and Release controls on the compressor. So what if we could apply this envelope to some other parameter instead of volume? Luckily, the large brain in a vat they keep in the basement of Propellerheadquarters has foreseen this question, and given us the Gain Reduction CV Output on the MClass Compressor.

In the screen to the left I've connected the Gain Reduction CV Out from the compressor to a Spider CV Merger & Splitter, then taken the Inverse output and connected it to Thor's Filter 1 Freq modulation input. Now, as well as the level ducking from the earlier patching, my bass line has its filter frequency ducked with each kick drum, giving a unique twist to the rhythmic pumping effect. You could, of course, stick your entire mix through a filter using this trick, or experiment with modulating any other devices in the rack. You can also reverse the effect and have the filter open with the kicks.

Side-chain compression really can make all the difference in music destined for the dance floor, but remember that you might not want everything in your mix to be ducked. The Line Mixer in our example rack allows you to route other sounds around the ducking compressor, but, if necessary, you can use another full mixer instead. Typically, vocals or a prominent lead sound will want to go to this mixer, along with the kick drum.

If you follow the steps in this article, you'll successfully set up a side-chained compressor configuration, but what exactly does that mean? A quick search on the SOS web site will bring up a number of articles dedicated to this subject, but here's a quick recap. Normally, when you route an audio signal into a compressor, the input itself determines the compressor's response. The louder the input signal, the more compression is applied, and the Attack and Release Controls respond to peaks in the signal that is being processed. This evens out level differences in the signal, reducing dynamic range, which, for most applications, is exactly what you want the compressor to do.

However, side-chaining or 'keying' allows you to do something different: control the compression that is applied to one signal with an entirely different signal (or sometimes with a filtered version of the original signal). This has different applications, such as causing particular elements of a mix to 'make room for themselves' by automatically reducing the level of other signals (as we're doing in this article). The classic example of this technique is the ducking used in radio, where the level of music is automatically reduced whenever the DJ speaks.