Simple and sophisticated sampling are both on offer with Live's Simpler and Sampler instruments.

Simpler offers single-sample playback and a basic control set. You drag a sample from your desktop or Live's browser into the sample display area and use the associated knobs and buttons (outlined in red) to select ranges for playback and looping. The remaining controls manage transposition, volume, panning, a multi-mode filter, an LFO, and amp, filter and pitch-mod envelopes.

Ableton offer two software samplers: Simpler and Sampler. Both are included in Live 9 Session, and Live 9 Standard users can purchase Sampler as an add-on Live Pack for €79$99. Although Simpler is a simpler sampler than Sampler, it is the perfect choice for many jobs, and patches started in Simpler can be instantly converted to Sampler format for more detailed work. Conversely, you can convert Sampler patches to Simpler format, in which case they will play with the full Sampler engine, but only Simpler's parameters will be editable. That allows you to share your Sampler patches, as well as include them in Live Packs for users who have only Simpler. In this month's column, we'll explore both, looking first at Simpler's capabilities and then moving on to Sampler's extended feature set.

Using Simpler couldn't be much easier: drag a sample into its Drop zone, set sample playback and looping boundaries as necessary and start playing. By default, C3 plays the sample at its original speed and pitch, but the Transpose and Detune boxes let you offset that by semitones and cents. The filter offers 12dB or 24dB per octave low-pass, high-pass, band-pass and notch modes. You can modulate its cutoff with an ADSR envelope, Simpler's LFO, note velocity and key number. Volume and pitch have their own ADSR envelopes. The LFO has six waveforms, is free running or sync'ed to tempo and can be routed to filter, pitch, pan and volume.

Working with Simpler's sample-playback controls can be a bit confusing at first. As is the case with Live audio clips, you'll find Start and End markers in the sample display that you can click-drag to restrict playback to a portion of the sample. Simpler's Start and Length knobs work relative to those markers; the Length knob reduces the playback region to a percentage of the distance between the markers, whereas the Start knob moves the whole playback region a percentage of that distance to the right, and when the end of the play region crashes into the End marker, the region begins to shrink. The Loop knob moves the loop start to the right of the playback start position. On release, playback ends at the end of the looped region (there is no provision for a release region).

Handling single samples suggests that Simpler is a good tool for playing percussion and sound effects. In fact, when you drag a sample to a cell in a Live Drum Rack, Live uses a Simpler to play it. The same is true when you drag an audio file to the Instrument Drop area of an empty MIDI track or when you invoke 'Slice To New MIDI Track' from the context menu of an audio clip. In the latter case, Live creates a Drum Rack and uses a cell containing a Simpler for each slice.

You can also use several Simplers in an Instrument Rack for basic multisampling. First, drag one or more samples to the Instrument Drop area of an Instrument Rack. Each dragged sample will be placed in a new chain containing a Simpler. Now use the Rack's Key Zone and Velocity Zone editors to determine which notes and velocities play each Simpler. When you're using samples with different root pitches, be sure to adjust their Transpose settings accordingly.

In addition to creating multisampled instruments, you can use an Instrument Rack of Simplers to layer sound effects or loops. For this, map a MIDI controller such as mod wheel to the Instrument Rack's Chain Selector and edit the Chain zones as desired. Keep in mind that you can insert different audio effects after each Simpler. Furthermore, you can drag several Instrument Racks created in this way into different cells of a Drum Rack. You can then set up the Drum Rack so that a different MIDI note triggers each cell, but each cell then sends C3 to its Instrument Rack.

Or Make It Complicated

Three Simplers holding different loops occupy separate chains of this Instrument Rack. Each chain's Key Zone is limited to C3 (not shown), to ensure that each loop plays at its original tempo and that all are triggered at the same time. The Rack's Chain selector is mapped to the MIDI mod wheel, allowing the three chains to be crossfaded in real time. Note that the Chain selector must be within a chain's range for that chain to be triggered.

Two things distinguish Sampler from Simpler: it holds many samples instead of just one, and it has a lot more controls (five control panels full). You use the tabs across the top of the interface to reveal the multisample Zone editor and to select the displayed control panel: Sample, Pitch/Osc, Filter/Global, Modulation or MIDI.

A good way to see how Sampler expands on Simpler's functionality is to convert one of your favourite Simpler patches to Sampler. To do that, right-click in Simpler's title bar and choose Simpler > Sampler at the bottom of the drop-down menu. In the resulting Sampler, you'll see a waveform display nearly identical to Simpler's, but the controls below are quite different: you get much more control over sample playback and looping. If you've used Simpler's filter, LFO and envelope options, you'll see those settings in the other Sampler control panels. If you convert the patch back to Simpler, these controls will still be editable, but you will lose access to the sample editing and playback controls.

Sampler's handling of multisamples is fairly standard, and you can import multisamples in many popular formats. To do that, navigate to the desired multisample file in Live's browser and drag it to a MIDI track. After the conversion process (which might take a while), the browser will reveal a Sampler folder in your User library, and you'll find the converted patch in the Imports subfolder. If you have the source sampler, you're probably better off sticking with that, but for generic formats like Sound Font (.SFZ) and for samplers not available as plug-ins, such as Apple EXS24 (.EXS), the import option is handy. Multisample zone management is handled in the same way Live handles zones for chains in Racks, and that includes the aforementioned Chain Select option for crossfading.

Besides multisampling, a number of things differentiate Sampler and Simpler. In Sampler's Sample tab, you get separate settings for each sample in the multisample, you can loop forward or forward-and-back, there is a release phase, and the sample start/end and loop start/end settings are completely independent. The Pitch/Osc tab contains the pitch envelope along with an oscillator for amplitude and frequency modulation (the oscillator itself is not audible). You can use that to add subtle harmonics or create extremely clangorous sounds depending on your choice of oscillator waveform, tuning, modulation amount and the oscillator's amplitude envelope. The Modulation tab adds a second and third LFO as well as an Aux envelope, each of which you can route to two destinations. Finally, the MIDI tab lets you route key, on and off velocity, aftertouch, mod wheel, foot controller and pitch-bend to two destinations each. 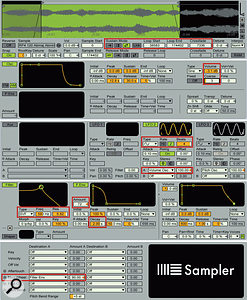 The steps described in the 'It's My Pad' section of the main text for adding motion to a Sampler patch.

Let's wrap things up with an example, to show you what Sampler can do. Follow these steps to add some motion to a sampled pad sound.

When you play the patch, you'll hear the amplitude modulation fade in and out, and, depending on the mod-wheel position, the filter will sweep through different timbres, for an effect similar to phase shifting.