Screensets enable you to save different views or window arrangements in your Reaper projects, so that you can easily select or recall them later while recording, editing or mixing. Instead of starting from scratch and creating an environment for a specific task, you can hit a key command and Reaper will rearrange all of your visual elements for you, just the way you want them.

There are two main types of Screensets: Track Views and Windows. Track Views are created, saved and recalled on a project-by-project basis and each project or song can have a completely different set that is only usable when you're working with that file. Windows Screensets are global; they can be recalled and applied to any project or song that you're working on. In this workshop, we're going to look at Track View Screensets.

Open any fairly large project with a lot of tracks to play with and then go to the Screensets/Layouts dialogue in the View menu and click the 'Track views' tab. This is the window in which you save or load your Screensets. You don't have to do it from this window, however; it can all be done with key commands, but it's good to get familiar with this window anyway.

You can have as many as 10 Screensets, and each one can have a key command for saving it and another for recalling it. By default, the first three are set to F3, F4 and F5 for recall and Shift-F3, Shift-F4 and Shift-F5 to save them. As with anything in Reaper, these can all be changed.

You can set different parameters to affect your Screenset by selecting one and then clicking 'Save'.

The easiest way to learn how to use Screensets is simply to create one, so that's what we're going to do now. Click the first one in the list that appears in the Screensets/Layouts window and hit Save. A dialogue pops up giving the chance to name the Screenset and choose the parameters that will be saved with it.

Let's keep it simple and create a Screenset that only saves the 'Track Cursor Position', which is the top option. Select that tickbox and de-select all the others. Name it 'Cursor A' and hit Save. Now move the cursor to a different position in the Arrangement window, select the second Screenset and hit Save again. The tickbox should already be the only one selected, so name it 'Cursor B' and hit Save once more. You now have two Screensets that will automatically change the cursor position to wherever it was when it was originally saved. This setup is useful for quickly jumping around to different sections of your project for playback or recording purposes with just a quick keystroke. In this case, you would use F4 and F5 to jump back and forth between the different cursor positions. You can also double-click or hit Load from the Screensets list to recall them if you prefer.

Let's try another. Choose the third Screenset by hitting Shift-F6. This is the same as selecting the third Screenset and hitting Save, except that it's quicker! Now you can de-select 'Track Cursor Position' and instead select 'Track Scroll Positions'. Hit Save and scroll your project around, up or down and left or right. Now Select the fourth Screenset and Save that with the same parameter enabled, with different scroll positions. Recall those Screensets by double-clicking each one (or hitting 'Load') in the Screensets/Layouts dialogue and noting how Reaper now scrolls to the same area you chose when you saved it. It's important to note that when you recall a Screenset using just the Track Cursor Position it will move your cursor but it won't necessarily be in view. For this reason, it's worth using Track Cursor Position and Track Scroll Positions together when you require that behaviour.

Next, we'll check out a parameter called 'Horizontal Zoom'. Select a Screenset, click Save and select just the Horizontal Zoom tickbox. Save it again and zoom in horizontally in your arrangement window. Select another Screenset and save it the same way, but zooming in horizontally to a different degree. Recall each one by double-clicking and note how Reaper recalls the zooming that you saved. This is great for saving Zoom Presets that will work in any section of the project you happen to be in. Because Reaper is just saving the left-to-right (horizontal) zoom, and not scrolling, it zooms in based on where you happen to be at the time. So if you scroll down to later tracks or move to later or earlier in the project, it will zoom in on those instead of the ones you were focusing in on when you saved the Screensets. If you wanted it to zoom into the same exact area each time, you would combine 'Horizontal Zoom' with 'Track Scroll Positions' when you saved the Screenset. Adding the 'Track Cursor Position' option might make even more sense, as if you wanted to scroll and zoom to a specific area, you'd probably want the cursor to be there too. Try adding all three of them when you need that behaviour. 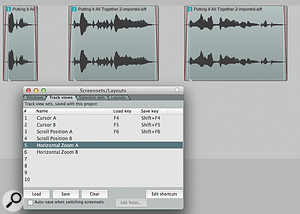 Screensets allow you to easily switch between different degrees of horizontal zoom. 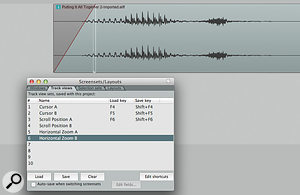 The next parameter we'll check out is 'Track control panel status (visibility, height)'. Let's focus on the 'height' part first. Choose a Screenset and click Save but this time just select the 'Track control panel status (visibility, height)' tick box and make sure all the others remain unticked, then save it again. Now go to all of the tracks in your project and change their heights individually; make some really big and others really small. Now go back to the Screensets window and choose and save with this parameter as well. Double-click or load each one and note how the heights toggle between both states. This is useful for focusing on specific tracks. For example, you could make everything really tiny except for the vocal, so that it stands out for editing. Combining this with Horizontal Zoom and, perhaps, Track Scroll Positions gives the ability to choose exact sections and views to focus in on, so that they look the same each time. It's very helpful to create one just for editing drums, another for editing guitars, and another for editing vocals. This way, with one click, everything is exactly how you want it for working with just those specific tracks.

Besides saving a track's height, you can also save a track's Visibility. It's part of the same parameter, so you can't separate them, but that's rarely a limitation, as they work together quite nicely. Let's go back and recall the first 'Track control panel status (visibility, height)' Screenset and open up the Track Manager in the View menu. Choose a few tracks to hide in the Track Control Panel and go back and re-save the Screenset. Now recall the second one (all the tracks should come back) and hide a bunch of different ones this time. Re-save that second one. You can now load the first and second by double-clicking them in the Screensets dialogue box, and observe the changes. This is really useful for keeping your eyes focused on specific tracks. For editing, I make Screensets for drums, bass, guitars and vocals, so that I can quickly switch to any of those groups, with their heights set optimally, and edit the tracks without having to wade through all the other tracks in the project. They're still there and they'll play normally, but I don't have to see them.

Create a Mixer Screenset that shows all tracks, or just show specific ones to help you focus on a certain part of the project.

The last parameter available to you is 'Track mixer status (visibility, order, controls)'. This is similar to the Track Control Panel, except that it works with the Mixer window instead. So, again, you can choose what tracks you want to see in your mixer, change their heights relative to the Inserts and Sends, and even make some track faders longer or shorter compared to others.

If you look in the bottom left of the Screenset window, you'll see a little tick box labelled 'Auto-save when switching screensets'. This is very helpful for those times when you don't want to have to keep saving every time you make a change. Let's say that you're toggling between two different scroll and zoom levels as you're editing a track. Each time, as you fine-tune it, you want to be able to get back to where you left off, which would usually require saving it each time. With this box ticked, Reaper automatically saves the Screenset that you're leaving when choosing another one. This is very useful in reducing extra unnecessary steps.

Finally, none of this is as much of a time saver as it could be if you used the Screensets window to switch between and save your Screensets. You really should be using keyboard shortcuts for this, if you can. In the lower-right corner of the Screenset window, you'll see an 'Edit shortcuts' button. If you select that button, it opens up the Actions menu and uses a filter to show you just the Screensets actions. Simply choose any of them and change their shortcuts in the lower left of the dialogue box to make fast work of switching Screensets using your preferred key commands.

That's pretty much it for the 'Track View' Screensets in Reaper. There's lots to talk about with 'Windows' Screensets, too, which we'll look at in a future issue.