We're reading between the lines in Logic this month, with a look at editing using the snap and nudge facilities.

In this month's column we'll be looking at using Logic's snap, nudge and transient detection facilities to improve workflow for basic data input and editing tasks, both on and off the grid.

The snap function in Logic forces your editing actions, such as moving, copying, resizing and splitting, to Logic's timing grid, and choosing the right snap setting for the resolution you want to work at can help your workflow. The Snap Mode menu in Logic is located at the top right-hand corner of the Arrange page. Its default setting is Smart, which tells Logic to try to guess the resolution of the grid you want your editing actions to snap to by how far you are zoomed in or out on the Arrange page. The other settings in the Snap menu are ordered in increasing grid resolution: Bar, Beat, Division, Ticks, QF and Samples. I find the most useful options to be Smart, Bar and Division. 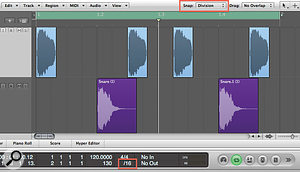 When the Snap Mode menu is set to Division, your editing actions will snap to the value of the Division setting in the transport bar; in this case, 16th notes.

It really helps to set up dedicated key commands to switch between the different snap settings, so that you can quickly toggle between them. You can also set key commands to raise or lower the Division setting in the transport bar, to change the snap resolution when using the Snap Division setting. Open your Key Commands window, using Option-K, and make a note of the snap mode and Division key commands. I have reassigned my favourites to the numeric keys above the alphabet.

I have the Snap and Nudge key commands that I use regularly assigned to the numeric keys below the function keys.

Just as useful as Logic's Snap settings are its nudge settings. The nudge settings are accessed by key commands and can work in conjunction with snap settings to make editing tasks easier. Once again, open the Key Commands window and assign key commands of your choice to the 'Nudge Region/Event Position Right by Division' command and its Nudge Left equivalent. Now let's use these snap and nudge key commands to help us programme drums with single audio hits.

First of all, add a single kick-drum hit to an audio track on the arrange page. Next, set snap to Division and, in the transport, set the Division value to /16. Now hold down Option and click-drag to copy the kick drum; notice that the copy snaps to the 16th-note grid.

When programming drums using audio, it's well worth setting the Drag menu, which is to the right of the Snap menu, to No Overlap, so that when your kick drums overlap, Logic automatically shortens the preceding region. This is really handy for things like kick-drum rolls. You can then highlight all the regions on the track and, in the Region Parameters box, add a short fade-out to all of them to ensure there are no unwanted clicks. Carry on copying and placing the kick drums until you have created a two-bar kick-drum pattern.

Next, let's use the nudge commands to experiment with a kick-drum pattern:

Let's now add a triplet motif to our kick drum:

When programming drums with audio regions, using the snap Division setting allows you to easily work in specific grid resolutions. You can then use the 'Nudge Region Position Right/Left by Division' key command to try out different patterns.

The snap and nudge commands are just as useful when working in the Piano Roll editor, so create a new software instrument with accompanying region and double-click on the region to open the Piano Roll window. The Piano Roll window has its own Snap and Drag menus in the top right of the Piano Roll. By default, snap is set to Smart, but when drawing in notes and editing note lengths, I find the Smart setting difficult to use accurately on the Grid. Fortunately, Logic has an option to help with this.

Use the key command you assigned previously to set snap to Division and ensure you have the Division value in the transport set to /16, then return to the Snap menu and choose the 'Snap to Absolute Value' option. This option ensures that when you go to draw in notes, or edit the length of previously recorded notes, they will automatically snap to the resolution you have set. In this case, all the notes we draw in will now both start and end exactly on the 16th-note grid. To temporarily override the Snap setting, holding down Ctrl and Shift while performing an editing operation, such as moving a note, sets the snap behaviour to ticks, whereas holding down just the Ctrl key will change the snap behaviour to Division. 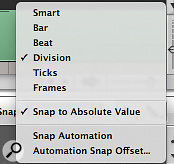 To edit note lengths and timings to the grid, select both the Division and Snap to Absolute Value options in the Snap Mode menu.Draw in some notes of different lengths. Now highlight a selection of those notes and use the nudge commands to nudge them forward and back by the Division value. We can also nudge up and down in pitch the notes we are editing, using the following key commands:

Let's look at one last scenario. When aligning audio events, we sometimes want to align the events to each other rather than to Logic's sequencer grid. To accomplish this, we'll make use of Logic's transient markers, rather than Snap options. In this example, I'm going to look at how to align a single-hit electronic snare to a sampled drum break: 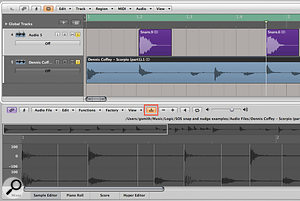 You can align single audio events — for example, layering an electronic snare drum with a sampled drum break in Logic — by using the Forward by Transient key command and pasting the snare at the playhead position.

Finally, if you need to tighten the timing of events within two audio tracks relative to each other rather than the grid, this can be accomplished using Flex Time. The method was outlined in the November 2009 Logic article, 'Using Flex Time on Vocals' (/sos/nov09/articles/logicworkshop_1109.htm).