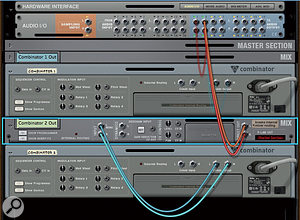 1: In this Reason rack, the stereo audio output (Direct Out) from Combinator 2's Mix Channel, renamed 'Combinator 2 Out', is cabled directly to Audio I/O outputs 3 and 4. Combinators, such as Combinator 1 here, that are not directly cabled will have their outputs mixed in Reason, with the mix being sent to the main output — Audio I/O outputs 1 and 2. You can use Live External Instrument devices to send MIDI data separately to any such Combinators, but all except one of the External Instruments should have their 'Audio From' set to 'None', to avoid duplication.

With the integration of Record into Propellerhead Reason 6, the strategy for Rewiring Reason to Live has become both simpler and more fully featured. This month's article is designed to bring you quickly up to speed with the changes. I'll start by looking at the easiest way to use Reason as a synth rack in your Live songs and then move on to some less obvious Rewire integration options. For using Live as a synth rack in other DAWs, check out the 'Rewiring Live' box.

Rewire is an automatically installed protocol (you don't need to do anything) for sending MIDI from one application, called the master or host, to another application, called the slave or client. (Here, I'll use Ableton's terminology of master and slave.) Rewire also handles the transmission of audio from the slave back to the master. So, in short, you can treat Reason like any other external instrument, sequencing it from a Live track and processing its output with Live or third-party plug-in effects. 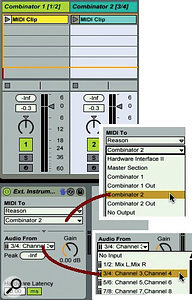 2: The Live track on the right uses an External Instrument device to send MIDI data to Reason Combinator 2 and to retrieve audio from Reason stereo Audio I/O channels 3 and 4, to which Combinator 2's Direct Out is cabled.

In order for Rewire to work, you must launch the master application before the slave application (Live before Reason, in this case). If you have the same MIDI keyboard set up for use in both Reason and Live, temporarily untick its 'Use with Reason' tick box in Reason's Control Surfaces preferences, so that all MIDI data comes from Live.

To save yourself a lot of time, create a Reason template song already set up with several empty Combinators cabled to separate outputs. Then, in Live, create a MIDI track with an External Instrument device for each of those Combinators, Group the tracks (Ctrl-G or Cmd-G) and drag the Group into the Sets folder in Live's Library. Whenever you want to Rewire Reason to Live, create a new Reason song from the template and drag the Live Group into your Live song. Your External Instrument settings will be preserved, so no additional set up is necessary.

3: The MIDI Ctrl drop-down menu for Live's Clip Envelopes shows the Combinator Rotaries and Buttons by name when the Live track is routed to a Combinator. You can then draw in control curves as illustrated here.

One of the advantages of using Combinators is that they offer a consistent way to control Reason device parameters from Live. The Combinator's four rotaries and four buttons respond to MIDI CCs 71-78, and you can automate those MIDI CCs in Live Clip Envelopes. If you're a Max as well as a Max For Live user, you can easily create a Max For Live MIDI effect to control the Combinator's rotaries and buttons, and then use track automation or a supported control surface such as the Akai APC40 to control the rotaries and buttons, as shown in screenshot 3.

A Change Of Climate

3: The panel on the left shows the simple Max patch for mapping Max knobs and buttons to Combinator rotaries and buttons. The resulting Max For Live MIDI effect is placed before the External Instrument mapped to the Combinator, as shown on the right. You can then use those controls manually, as well as record or draw track automation for them.Once you've programmed the Reason parts for your Live project, you'll probably want to freeze them so that you can work in Live without Reason. This will capture all the action from both Reason and Live tracks. If you've only used Reason tracks, place an empty clip on the corresponding Live track to ensure that freezing works properly (this is sometimes necessary and sometimes not).

To use a Reason audio effect such as Alligator, Neptune or Pulveriser, you need to first import the audio to be processed into Reason. If it's an audio clip that you're using in your Live song, just import that. If it's a Live instrument track, first freeze and consolidate the track or render the track in Live and then import the result to a Reason audio track (Ctrl-Alt-I or Cmd-Opt-I). Use the Reason audio track's Insert FX area (which works just like a Combinator) to load or build an effects Combinator. 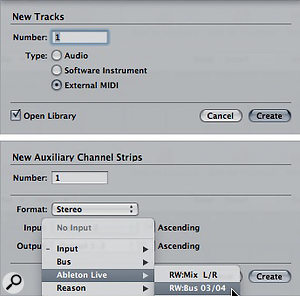 4: Use the Track drop-down menu to create an External MIDI track for routing MIDI from Logic to Live (top). Use the Mixer's Options drop-down menu to create an Auxiliary Channel Strip for routing Live's audio back to Logic (bottom).Now you can use a Live External Instrument exactly as described for playing, processing and freezing Reason instruments to capture and process the output of the Reason audio track. The audio track will be listed on the External Instruments MIDI To menu, and you can use that to automate the effect's Combinator-like four knobs and buttons. Alternatively, if you won't need to change the Reason processing, simply create a new audio track in Live, choose the appropriate Reason Rewire output as its input, and record a new clip in Live.

Since Reason doesn't transmit MIDI data, the only way to use Reason pattern devices (Matrix, Redrum, RPG8 and Dr OctoRex) to play Live instruments is to copy their patterns to Reason tracks (Edit menu) and then export the Reason song as a MIDI file. When you drag the file into Live, the Reason tracks will be imported as separate clips. It's a bit tedious, but the results can be worth it.

Unlike most DAWs, you can use Live as a Rewire slave instead of as the master. If you've ever wished another DAW had Live's Session view features, this gives you most of that for Live audio and virtual-instrument tracks — simply trigger Session view clips in Live and record the results in your DAW. The setup will differ somewhat for different hosts, but will be similar to the description here for Apple Logic Pro 9.

After first launching Logic and then launching Live, notice that the Cue Out and Master Out menus in Live's Master channel offer mono and stereo Rewire bus outputs instead of the outputs to your audio interface. Other Live tracks can route their audio to the Master channel as usual or directly to any of the Rewire buses. So if you simply want to pull the master mix from a Live set into Logic, you need only do a little setup in Logic and you're ready to go. If, on the other hand, you want to capture individual Live virtual instrument and audio tracks, you'll need to assign a separate bus output to each and configure matching inputs in Logic, similar to the setup described for Live and Reason in the main text.

To route MIDI data from Logic to a Live MIDI track, use Logic's Track drop-down menu to create a new External MIDI track. Select the new track and, in the Library tab of Logic's Media browser, select Ableton Live and the desired Live destination track.

To route audio from Live to Logic, use the Logic Mixer's Options drop-down menu to create a new Auxiliary Channel Strip. Now choose the stereo Rewire bus and select the input that matches the Live track's output, as shown in screenshot 4.

To record Live's audio output on a Logic audio track, route the aux's output to one of Logic's buses and use that bus for the audio track's input. Alternatively, you can bounce the Live MIDI track to audio and then import that into Logic.