Have you wondered how well Apple's solid‑state drive option for their MacBook Pro and MacBook Air actually performs? This month we put it to the test.

As a change from the usual digest of news and rumours pretending to be news, this month I'm looking at one product in a little more detail. I've tested a variety of hard drive setups during the last few years and was intrigued when Apple released a solid‑state device (SSD) option for the MacBook Pro and MacBook Air in 2008. For the Air, the option makes sense, as it raises the capacity previously limited by the physical size of high‑capacity hard disk drive (HDD) mechanisms, uses up to 50 percent less power and has no moving parts, so it can withstand the shock and vibrations to which an ultra‑portable device such as this might be exposed. For the MacBook Pro, it makes less sense at first glance, as the capacity is lower than cheaper HDD alternatives, so I was keen to see if the performance benefits might balance or even outweigh the high cost. 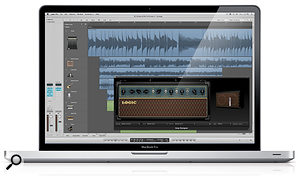 The machine on test is a MacBook Pro with 15‑inch screen, 3.06GHz Intel Core 2 Duo processor and 4GB of memory (1067MHz DDR3), supplied with Mac OS 10.5.7. The SSD fitted is the 128GB version (a 256GB option is also available). This is a so‑called 'June 2009' model, released without the EFI firmware update 1.7 that allows owners of machines released at this time to access the full potential of third‑party SATA 3 GB/s devices (although Apple themselves do not qualify or supply these devices, and say "their use remains unsupported”). I wondered if this update would make any difference to the performance of the supplied drive, which is 'Apple qualified'. Thanks must go to the ever‑helpful Jigsaw Systems of Nottingham, UK, for supplying the machine on test. Perhaps not surprisingly, this configuration is hard to find; even Apple's mighty PR machine could not source one for test!

The first set of tests was carried out with the MacBook as it came out of the box. Actually taking it out of the box is now a slightly disappointing experience, as you pretty much just get the laptop, a PSU and the discs; all the gadgets (the remote, the VGA adapter, the plug you never used) are optional extras.

To begin, I performed the obligatory disk‑speed testing, for which I used QuickBench from www.speedtools.com. With random read and both types of write tests scoring over 70MB/s, and the sequential read speed measuring 83.5MB/s, this SSD drive wipes the floor with any opposition, and is also faster on all counts than an external Firewire 800 drive attached to the same computer. Taking 43 seconds to copy a 1.67GB folder back to itself (compared with 62 seconds for the Firewire 800 drive), its performance is up there with eSATA Raid systems (the same task took three minutes and 16 seconds with a stock 5400rpm MacBook hard drive!). I had a hunch that this setup would be impressive even when powering up, as boot time was very fast and applications also loaded quickly.

The setup also flew through the real‑world tests. Playing back 255 tracks of 24‑bit, 96kHz audio (Logic Pro's maximum track count) was no problem, nor were 32 tracks of heavily edited audio. It should be stated that this is by no means the maximum, and I have to confess that I gave up creating new files and tracks at this point, as it is a fairly labour‑intensive process! To put this into context, however, the external Firewire 800 drive managed the same results (with more activity on the system performance meter, especially when pressing play), which perhaps underlines the not insignificant supporting role that the MacBook Pro's top‑of‑the‑range subsystem (a very fast processor on a very fast buss) plays in delivering this amount of data.

Updating the EFI firmware to version 1.7 actually resulted in lower figures from QuickBench (see table on previous page). This is perhaps surprising, but it does indicate that benchmark tests do not necessarily predict real‑world results. In this case, the real‑world tests produced the same results as before the update, so it's hard to say whether the update is an improvement. 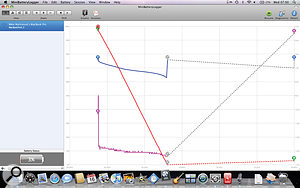 The MiniBatteryLogger utility measures laptop battery life. It recorded longer life with the solid‑state drive than with a typical conventional hard drive.Power consumption was tested by running 245 tracks of 24/96 audio continuously, with typical Energy Saver preference settings (Optimisation set to 'Better battery life', display sleep set to 'Never', auto adjust set to off, and 'Slightly dim the display when using this power source' selected). MiniBatteryLogger (from www.emeraldion.it) recorded a battery life of two hours and 28 minutes under these conditions, slightly better (by about half an hour) than typical HDD performance on the same test, proving that the power drawn by the display is still far more significant than that drawn by other components.

When I discussed my findings with Jigsaw, the issue of recording was brought up. Stories have circulated that SSD drives can struggle when recording, due to the way in which data is handled by these devices. However, figures achieved when testing audio recording tell a different story. The Macbook Pro had no trouble with recording all 28 inputs from a TC Studio Konnect at 24‑bit, 96kHz. Even with record paths set to internal buses and the sample rate increased, the machine handled the recording of 64 tracks at 192kHz! This supports the results of the QuickBench tests, showing that this machine is capable of recording well beyond the maximum number of inputs provided by most audio interfaces. And here lies a major gripe with the current edition of the MacBook Pro. Only the 17‑inch version has an ExpressCard slot enabling the connection of the sort of high‑end interfaces that would complement the machine's stunning performance. An SD card slot doesn't really cut the mustard with professional musicians!

Another gripe, but one that can be fixed, is the glossy screen. It looks fantastic when watching a movie in low‑light conditions, but when you're working, the reflections of room lighting can be very distracting. If you decide to buy a Macbook Pro, I recommend the anti‑glare option.

There is another benefit to SSD that should also be mentioned. Standard HDD mechanisms have a 'park sensor', which, when triggered, causes a 'Hard drive too slow' warning to be flagged up. This is to protect data when the machine is knocked or dropped, but can can cause problems when recording in the same room as, say, a loud bass amp. You can disable this in the command line, but then you risk damage to your drive. The SSD drive, with no moving parts, does not come with the same issue which makes it ideal for live recording. This would make an SSD-equipped MacBook perfect for Mainstage users, or those using any streamed‑from‑disk audio content in a live situation.

To sum up, yes, the SSD drive is an expensive option, the 128GB variant costing between $200 and $350, depending on the size of the hard drive normally supplied as standard with the machine you are purchasing. It also requires an expensive configuration to benefit fully from the available performance, and storage capacity is perhaps on the low side compared with HDD equivalents. However, the combination of MacBook Pro and SSD is blisteringly fast for a portable solution, exceeding even the capabilities of Logic Pro, and also that of many desktop systems. If Apple do ever release the much‑touted tablet, the knock‑on benefit of cheaper SSD storage will be difficult to resist. 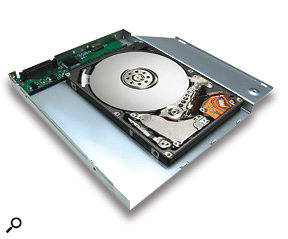 The OptiBay system lets you replace the optical drive in your MacBook or MacBook Pro with a hard drive.

If you'd like the performance of an SSD drive but capacity is an issue, one alternative to external drives is provided by MCE's OptiBay system (see www.mcetech.com). This allows you to replace the optical drive in your MacBook or MacBook Pro with a hard drive. A caddy and suitable hard drive are provided to replace the DVD drive, which can then be used externally using the supplied housing.