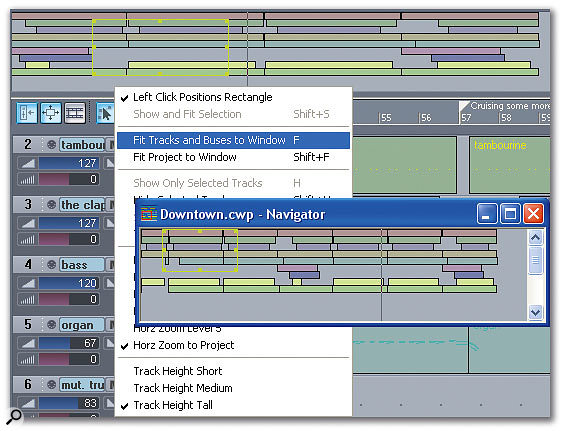 The Navigator view provides another point of entry for accessing commands that relate to sizing projects and fitting them to the available space.

Quite a few of the new features in Sonar 4 seem fairly straightforward — until you dig a little deeper. Such is certainly the case for the Navigator view, which is more than just an overview; it's a powerful tool for getting around a project.

The Navigator view is a strip that sits in the upper part of the Track View and shows the entire project at a glance. You can make this strip appear and disappear with the Show/Hide Navigator button (located above the Tracks Pane), as well as dragging the separator bar between the Navigator view and Track view up or down to change the Navigator view's height.

This is all fairly basic, and a lot of Sonar users could stop here and still get a lot out of the feature. But there's more. Right-click within the Navigator view strip and you'll find multiple options.

Many of these commands (Fit Project to Window, Hide Selected Tracks, Track Manager, etc) duplicate those found under the 'View Options' button in the toolbar above the Tracks pane. In any event these commands, regardless of how you invoke them, now affect both the Clips pane and the Navigator.

You can also select one of six horizontal zoom levels. This may seem redundant — isn't it simple enough just to resize the rectangle? Yes, but making the zoom levels part of the pop-up menu options means that key bindings can trigger them. This is particularly useful for the 'Horz Zoom to Project' function, as hitting a key can instantly fit your entire project within the Clips pane and Navigator view. The other pop-up menu selection involves track height within the Navigator view. For projects without a lot of tracks, I recommend the Tall option, as that makes the tracks much easier to see.

There's one other cool navigation technique. Go View / Navigator, and the Navigator appears in a separate window that supplements the main Navigator strip. Resizing the window resizes the contents as well, so you can do anything from floating the Navigator to a second monitor and maxing out its size for easy navigation, to slimming it down and using it as a floatable Navigator strip on your main monitor.

It takes a little effort to break old habits and start to think of the Navigator as your primary way to get around a project. But once you do you'll find yourself zipping around in much less time.

Many Sonar users chose the CWENC MP3 encoder as an alternative to Sonar 's 'optional at extra cost' MP3 encoder. Unfortunately, it's not possible (at least, not yet) to get CWENC to work with Sonar 4. However, there's still a free encoder option: the LAME encoder.

First, you have to download the LAME software. It's widely available on the web, and I found a copy at www.free-codecs.com. Now, I can't comment as to the legalities of using the LAME encoder without paying royalties to those who invented the MP3 format, and LAME is said to be for educational purposes only. However, it seems that no one's getting prosecuted for doing the occasional MP3 conversion using 'freebie' tools (although if MP3 is a significant part of what you do, you may do your conscience good by getting an 'official' encoder).

Second, you need to take advantage of a new Sonar 4 feature, 'Configure External Encoder', to get LAME to work. This involves installing a profile for the encoder and telling Sonar where to look to find the encoder it's supposed to use.

The next time Sonar is open and you go to Export Audio, any of the profiles you configured will show up as export options. Now go forth and encode!

I've taken quite a liking to the Digitech GNX4 recorder/guitar processor, for several reasons, but the one that's of the greatest interest to Sonar users is that it's supported as a control surface within Sonar (called 'Digitech hands-free recording').

The GNX4 has a USB interface that communicates with the computer running Sonar. Once connected, the GNX4 footswitches control several functions. When you click on the Record footswitch, this creates a stereo pair of tracks in Sonar that defaults to recording two channels of audio coming in over USB from the GNX4 (guitar, mic, line ins, drum machine, etc), record-enables the two tracks, then automatically commences recording. (The GNX4 can also send a second pair of audio tracks via USB. If a source is also assigned to these, Sonar will create, record-enable and start recording with another set of tracks whose inputs are assigned to this second pair.)

In some ways this process resembles loop recording, in that recording functions are automatic and you can initiate more tracks for recording simply by pressing the Record footswitch. Unlike loop recording, though, you can fiddle around between takes. For example, what sold me on the hands-free feature was recording a sample CD of guitar licks. It was easy to record track after track, making slight changes to alter the sound of the samples. While I'm not sure that hands-free recording alone justifies the price of the GNX4, if you're a guitar-playing Sonar user in the market for a signal processor that includes a lot of other features, hands-free recording is a major bonus. 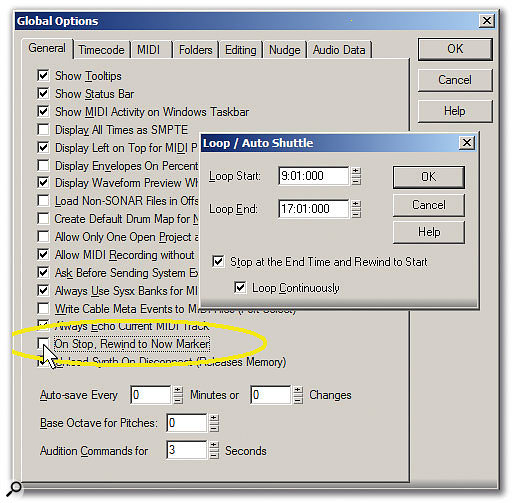 The Now Time can either snap back to where playback started, or can stay where it was when the transport stopped. However, the Loop/Auto Shuttle settings also influence the Now Time position.

There are two general options, as selected in the Options / Global / General tab. If you tick 'On Stop, Rewind to Now Marker', when the transport stops the Now marker will return to where it was before playback began. This is the probably the best option to use if you're overdubbing parts over the same section of a tune.

If you untick 'On Stop, Rewind to Now Marker', when the transport stops the Now Time will stay at its stopped position. If you click on 'Play', the Now Time will now continue playback from where it left off. This is the option I tend to use while composing, where I'll block out sections of a tune without being too concerned about the part itself — the goal is simply to get parts down before the inspiration goes away.

There is one other factor regarding where the Now Time ends up, as found under Transport / Loop and Auto Shuttle. This matters only if you've looped a portion of the project and looping is enabled. With 'Stop at the End Time and Rewind to Start' ticked, when the Now Time reaches the loop end the transport will stop automatically and the Now Time will rewind to the loop start. Unticking this turns off looping. If you'd prefer to have looping run continuously, tick the 'Loop Continuously' box.

And what happens if you click on 'Stop' before the Now Time hits the loop end? That depends on whether 'On Stop, Rewind to Now Marker' is ticked or not under Global / Options. If it's ticked the Now Time will snap back to the beginning of the loop. If unticked, it will remain at the stop point.

If you still have Sonar 3 but envy the Track Folder feature in Sonar 4, there's a workaround for MIDI tracks. While this technique is nowhere near as flexible as Track Folders, it does help tidy up groups of MIDI tracks. 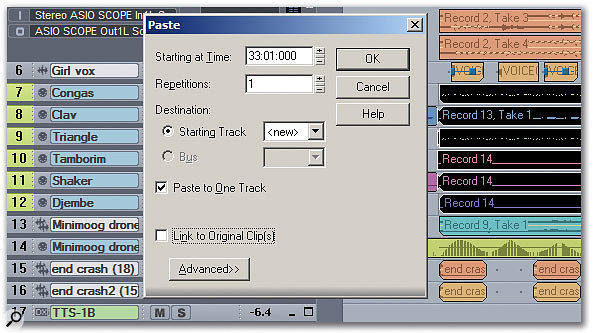 The selected MIDI clips have been copied and are about to be pasted into one track, thus collapsing them into a single clip on a single track.

Consider this scenario: you've created a MIDI drum part over multiple tracks, with each drum sound getting its own track. But now you've tweaked the part and you want to collapse all the drum sounds into a single track.