Sonar offers lots of useful metering options you may not even be aware of, so this month we run through them and why you might want to use them, as well as getting clever with colours and explaining how to make your screen setup a hint more transparent...

Sonar's metering options are extremely flexible, so much so that you may not really be exploiting the meters to the full. Meters can tell you a lot more than whether a source is overloading while recording, or peaking during playback, so let's investigate some of the more advanced possibilities.

Metering really comes into its own in the Console View, because Record track, Playback track, Buss and Mains metering can all have different characteristics. The metering options are all accessed via the drop-down menu (Meter Options) to the right of the Show/Hide All Meters button (the second button from the top in the 'toolbar' to the mixer's left). 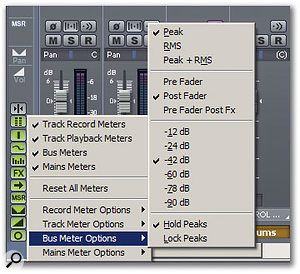 Meter options are fairly similar for Record Track, Playback Track, Buss and Mains meters, although there are a few significant differences.The biggest difference among the meter groups is where they monitor the signal. The Mains meters are always post-fader, because you need to know what level is hitting the outside world, and the Record meters are always pre-fader, because it's essential to be sure that the signal entering Sonar isn't overloading the audio engine. The Track Playback meters can be pre or post fader, and as the effects insert prior to the fader, monitoring in the post-fader position takes into account whatever the effects are doing.

In the case of the Buss meters, there's an additional option, as they can read the pre-fader/pre-effects signal, the pre-fader/post-effects signal, or the post-fader signal (which, as mentioned, reflects whatever the effects are doing). Why is this level of detail provided? Because busses often include 'send' effects such as reverb. As multiple signals may feed a buss, if an overload is occurring you need to know if it is due to excessive signal levels hitting the buss or simply a problem with an effect. (You can't simply monitor post-fader, because busses with send effects can sometimes have a fairly low output and you wouldn't 'see' any distortion.)

All meters have six possible ranges, from zero to -12dB all the way to zero to -90dB. They can also monitor peak, RMS (average), or peak + RMS (lines indicate peaks, solid bars indicate average). A Hold Peak function lets peaks persist for a few seconds, while the Lock Peaks setting retains the highest peak attained even after you click on Stop (hitting Play or Record, or choosing 'Reset All Meters' from the meter options clears the peaks).

The Mains are also a good place to use Peak + RMS metering. At this point in the signal chain I'm more interested in average levels, because I find it easier to grasp the dynamic character of a mix by looking at the average level as opposed to the peak level on the meters. However, it's still important to make sure peaks are under control, hence the choice of Peak + RMS mode.

That's probably more than you ever wanted to know about meters! Of course, some will say you shouldn't mix with your eyes — and, by and large, I agree. But proper use of metering for visual feedback on what's happening aurally saves time. If you use only your ears you'll sometimes experience situations where you wonder if you really heard what you think you heard, and visual feedback will often provide the answer without your having to go back and listen again.

Changing Sonar's background wallpaper is a fun tweak. At the bottom of the Configure Colours screen, click on 'Custom' for 'Wallpaper'. You can import a specific BMP-format image, such as a studio logo, or one of the stock Windows patterns. Note that anything you import will be tiled, so you can use a small pattern.

The delay-line processor has been set to maximum transparency using Glass2K, so it's relatively easy to see the waveform it's processing.

Even with a two-screen setup, using a complex music program like Sonar can result in a very crowded desktop. Don't you wish you could make some of those soft synths and effects translucent, so that you could see what was going on behind them? Well, you can, thanks to a program called Glass2K (www.chime.tv). This is a free, tiny (55K) program; download it, double-click on 'glass2k.exe' and you're ready to go.

Once the program is active, you can give any window 10 levels of transparency, which can be called up via keyboard shortcuts (or you can save the desired level of transparency with the window). It's also possible to make the Taskbar more transparent, which is a nice bonus. The program throws a little icon in the system tray: click on it to adjust default settings, alter the keyboard shortcuts, and so on. I use this mostly to make signal processor plug-ins more transparent, so that I can place them over the tracks they're processing and still see the waveforms being processed. Even when a window is maximally transparent you can, of course, still click on the various knobs and sliders. They work just as if the window was solid.

Although Glass2K is identified as a beta, I've found no stability issues or problems when running it under Windows XP. Granted, transparency is no substitute for a large monitor, but it can certainly help to give a less cluttered feel when working with a sophisticated host like Sonar. And the price is certainly right!

Sonar 4 provides a lot of colour customisation options, and though I personally think the default colours are fine, this flexibility is certainly welcome and can indeed make keeping track of what's happening on screen just that bit easier. However, a few people feel that the whole colour thing started going over the top with Sonar 3, and went way over it with Sonar 4! If you're one of them, go Options / Colours to call up the Configure Colours screen and under Presets, select 'Sonar 2'. Hey presto — you're back to the flatter, more muted look of this older version. There's also a preset for Sonar 3, if that's the colour scheme that floats your boat.

I find each of the three Sonar 4 colour options useful. In the Track View, the stock Sonar 4 preset has somewhat 'washed out' waveforms and track backgrounds in the Clips pane, which gives a bit more weight to the Tracks pane. The 'Sonar 4 Alternate Clips 1' preset is similar, but the track background colours are more bold. This option is great when you're dealing with a lot of similar-looking tracks (an extreme example would be recording multiple takes of the same basic riff when creating a sample library) and you want to be able to differentiate between them as easily as possible.

'Sonar 4 Alternate Clips 2' is more of a high-contrast mode, where the waveforms really stand out from the backgrounds. This preset works well when you're editing clips at a fairly detailed level — for example, zooming in and adding slight cuts, tweaks and fades. 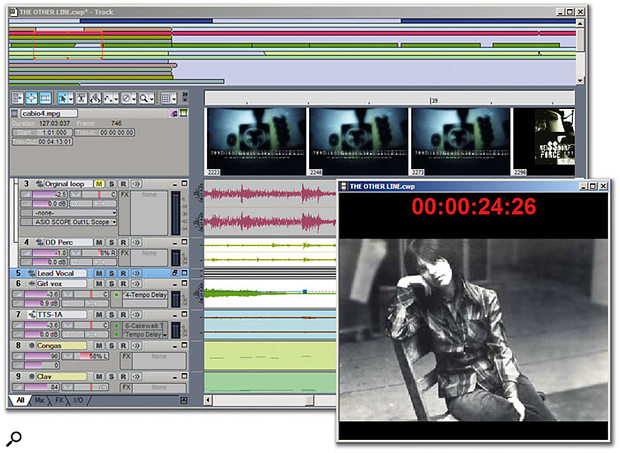 The 'PT' colour scheme works well with video projects, as the audio tracks are a bit more muted than usual. Note the custom wallpaper, which uses Windows' 'Prairie Wind' pattern.

Colour is naturally a subjective matter. But I've spent some time working with the various non-default colour-scheme presets and I do have some favourites. 'Breeze' has an airy, open feel, while 'Essex' is extremely bright and makes it really easy to differentiate between tracks when you're working a lot with the Navigator view. The 'PT' preset (hmmm... wonder what 'PT' could stand for?) is a bit plain, as it's based heavily on grey, but it's easy on the eyes during long sessions. I also find it useful for video work, because the video window/thumbnails and Navigator view stand out, compared to the more subtle audio tracks.

Also under Options / Colours, you can change the colours of screen elements. But be aware of the Law of Unintended Consequences — for example, choosing a great colour for the volume envelope, then finding that it's the same colour as an existing send envelope. So you change that, but then the new colour is too close to that of the pan envelope... you get the picture. However, one tweak that doesn't seem to get you into trouble and works well is choosing red for the Track View Volume Control/Envelope parameter. I work mostly in the Track View, and using a dramatic colour for the volume control makes it easy to see track levels at a glance.