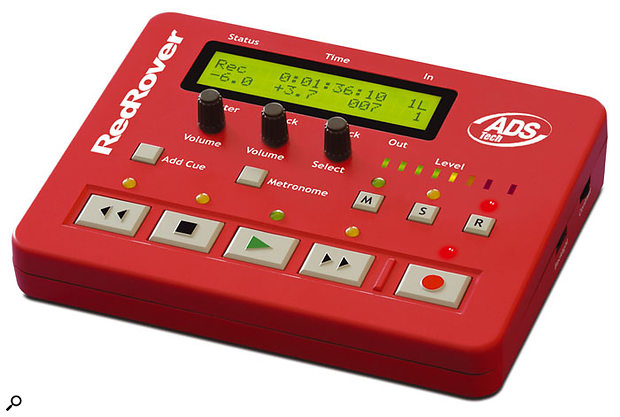 Red Rover, although originally designed for Cool Edit Pro, is now supported as a control surface within Sonar.

It's time to address the Studio versus Producer question, as well as looking into a new Sonar remote-control option.

I'm a fan of hands-on control, particularly when mixing, but remote control is also useful when tracking. With so many musicians now recording in the same room as their gear, hard drives and other noise sources are problematic. And, for guitarists, standard magnetic pickups can pick up hum and grunge, which often necessitates standing in a 'sweet spot' (seldom next to your computer keyboard) to minimise noise.

Although there are many comprehensive remote controllers, sometimes all you want is something simple, inexpensive and small — like the ADS Tech Red Rover. I originally bought one of these to control Cool Edit Pro (now renamed Adobe Audition), but the good news for Sonar users is that they can now download a Red Rover control surface plug-in from www.cakewalk.com.

Red Rover lists for around £150, but is also bundled with Audition for around £270. Although you might think of choosing the less expensive option because you already have Sonar, Audition's noise-reduction tools are excellent for cleaning up tracks — and if you're into creating loops, Audition is one of the few editors that leaves Sonar's groove clip markers intact even if you change bit-depth or sample rate. Sonar is a full-featured program but it's not a digital audio editor, and Audition can fill that gap.

Back to Red Rover, which connects to the computer via a 10-foot USB cable (which you can extend with an active USB driver) and is bus-powered. The front panel has a backlit, two-line by 20-character LCD, three knobs (master volume, track volume and track select), an eight-segment level meter for record and playback, buttons for mute/solo/record, and transport controls. Another button adds cue markers and brings up the marker dialogue, while the remaining button turns the metronome on and off during recording. A footswitch jack on the back allows hands-free recording.

Red Rover seems pretty undemanding. It doesn't hog a lot of USB bandwidth, nor draw much power (about 350mA). If your USB port can't provide enough juice, either use a powered USB hub or turn off the LCD backlight (the main power drain). Incidentally, a driver CD is not needed: I plugged Red Rover into Windows XP and recognition was automatic. The icing on the cake is that Red Rover's footprint is small enough that you can fit the remote just about anywhere. About the only weirdness for me was that the control surface plug-in refused to let me specify USB as the MIDI port — it insisted on listing my Creamware card's MIDI interface. But I could select either that or 'none' with no problems. Apparently Red Rover simply communicates via USB, leaving any other MIDI ports out of the picture. For more info on Red Rover, visit www.adstech.com and go to the Professional Video/Audio section. 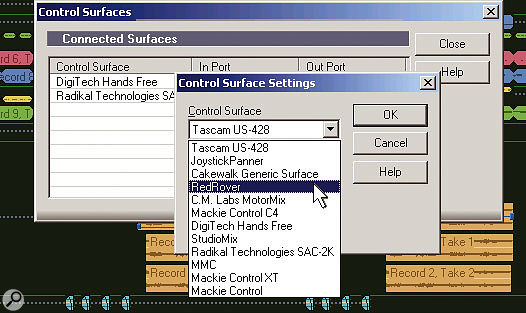 Installing Red Rover is simple: Just select it from the list of supported control surfaces in Sonar.

A few Sonar 3 users have asked whether to pay the premium for Sonar's Producer Edition, or get the Studio Edition now, then upgrade to Producer when Sonar 5 comes out. They've done the maths, and based on past US dollar pricing it would cost about $70 less to buy Sonar 4 Studio Edition now and step up to Sonar 5 Producer Edition later ($99 upgrade to Studio, then $229 to Producer) compared to going for Sonar 4 Producer now ($199), then upgrading to Sonar 5 Producer when it appears (presumably another $199).

Under some circumstances, the choice is obvious: if you plan on doing surround or video, you'll need Producer. Beyond that, the decision hinges more on subtleties. The next 'big-ticket' item in Producer is the Sonitus suite of plug-ins, which lists for $299 if purchased separately. Although the plug-ins that come with Studio Edition are decent, I prefer Producer's. There are some good free plug-ins on the net, so perhaps another set of plug-ins isn't essential. But if you don't already have a good selection, the Sonitus set is a pretty good deal when bought as part of the Producer Edition, especially given its quality.

The Prosoniq MPEX time-stretching algorithms are also a Producer advantage. If you need to stretch audio with minimal artifacts, sound quality is superior to Studio's timestretching. Another 'pro' option is POW-r dithering, which many people consider to be about as good as it gets.

One more factor is that the Producer Edition's mixer includes per-channel EQ based on the Sonitus EQ plug-ins. Of course, you can insert your EQ of choice in Studio, so this is probably not a deal-breaker. Producer also provides four assignable effects controls on the mixer panel, which is a convenience — but if that's the only reason you have for upgrading to Producer instead of Studio, it hardly seems crucial.

For most people, an upgrade to Producer would be fairly easy to justify. For first-time buyers, the cost savings made by going with Studio are more substantial. But as long as Cakewalk continue their relatively benign upgrade policies, you can always step up when the next major revision hits.