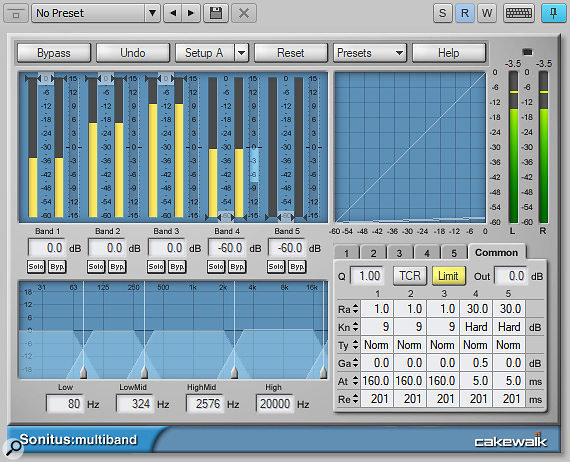 Screen 1: Multiband compression can ‘de-ess’ a guitar so the treble doesn’t distort too much with high-gain amps.

Ever since the 2016.04 update, all versions of Sonar include Overloud’s TH3 Cakewalk Edition amp simulator. This replaced the two different TH2 editions that came with previous versions, and comes with many more modelling options than TH3 Free (14 amps and 11 cabs, including a bass cab, compared with just three cabs and cabinets in TH3 Free), plus an expanded choice of effects. What’s more, on top of all the built-in modules, you can take your sound even further by placing TH3 in an FX Chain, and then ‘accessorising’ it by including various Sonitus plug-ins within the Chain.

The tone controls included in the modelled amps are what you’d expect from guitar amps — in other words, not too flexible. However, the Sonitus:Multiband compressor makes an excellent ‘tone stack’ because you can boost or cut levels in up to five bands, as well as setting the frequency range covered by each band.

Start by clicking on Sonitus:Multiband’s Common tab. Click on the ratio field, then drag to set the compression ratio for all bands to 1.0. This inhibits compression, so except for the Limit button and output control, the other tab parameters are no longer relevant. Next, set the vertical dividers for the desired frequency band ranges. A band’s Solo button is very handy here, because you can play with the dividers to focus in on the frequencies you want the band to affect.

When creating the FX Chain, you can assign knobs to the gain (boost/cut) parameter for specific bands. If you prefer the standard bass/mid/treble control complement instead of five bands of EQ, you can move the high divider all the way to the right, and the low one all the way to the left. Another option for three-band EQ is to use one knob to control the low and low-mid band gains simultaneously, and another knob to control the high-mid and high band gains simultaneously.

You can also supplement the knobs with buttons that affect parameters within a TH3 amp. For example, many amps have a Presence control. Rather than tie that to a knob, you can insert a button, and assign it to the Presence control with a start of 50.00 percent and end of 100.00 (or less: 80.00 may be all you need). That way, enabling the Presence button (which I usually place above the Treble knob) will give a useful boost that brings out articulation.

For amps without Presence, the amp’s Treble control can provide a similar function, as can the Normal/Bright switch found on some amps (Darkface ‘65, Bass SuperTube and Tweed Deluxe). This same concept can also apply to an amp’s mid-range control. Insert a button above the ‘Tone Stack’ Mid control, and use the button to switch the amp’s mid-range control between 50 percent and a higher value to add a mid-range boost.

Another good candidate for an FX Chain panel button is the ReSPiRe parameter in TH3 cabs, which adds some bass ‘body’ to the sound. I often assign this parameter to a Bass Boost button above the Bass tone control.

Adding a de-esser in front of distortion is one of my favorite tricks for obtaining a ‘creamier’ distortion sound — it’s like an automated version of rolling down the tone control, except that in this case the effect responds to dynamics. There are several ways to accomplish de-essing in Sonar, but the simplest (and easiest to adapt to guitar instead of voice) is to add the Sonitus:Multiband as the first effect. Set the high-mid band to start around 2500Hz, and then set bands four and five to the highest ratio and pull their thresholds down to minimum. Edit the other bands for a ratio of 1.0 with their thresholds all the way up, so that only the two highest frequency bands are compressed. You may want to play with the frequency ranges somewhat, but the settings shown in Screen 1 (see opening screen, above) are a good start.

Enhancing amp sims with room reflections, typically using digital delays, can provide more realism and make guitars ‘fit’ better in a track. However, the shortest available delay in TH3’s Digital Delay module is 30ms, which is too long for ‘tight’ room reflections.

Screen 2: The Sonitus:Delay can add authenticity to an amp sound by generating a little room ambience.

Adding a Sonitus delay last, or close to last, in the FX Chain can not only create more of a room vibe, but also enhance the stereo imaging. The delay times are set to prime numbers so they won’t ‘step on’ each other. An FX Chain button switches the right and left channel mixes between 0.00 (all dry) and 40.00 percent, which mixes in the delay. Experiment with the desired mix; if you want just a hint of ambience, 20.00-30.00 percent is a better choice. Also, because the delays are prime numbers, you can get away with a bit of feedback and even some crossfeed. Try out various parameters and eventually you’ll find a good setting that you can assign to an FX Chain ‘Widen’ button.

Boost Was Made For Walking

One of the most crucial amp-sim controls is Drive, because it can adapt the sim’s response to different playing styles, pickups, and string gauges. Therefore, I usually assign an FX Chain knob to an amp’s Drive parameter. I also like to add a button above the Drive control that ties to an amp’s mode, when available. For example, the Modern CH3 amp has a mode switch for Raw, Vintage and Modern. Setting the button start and end to 0.00 and 100.00 percent respectively switches between Raw and Modern, while choosing 60.00 to 100.00 switches between Vintage and Modern. The Overloud Custom amp similarly offers Normal, Bright and Boost modes.

TH3 Cakewalk includes a tempo-sync’ed tremolo, but we can add the Sonitus:Surround plug-in in an FX Chain to give a choice of vibrato or tremolo. 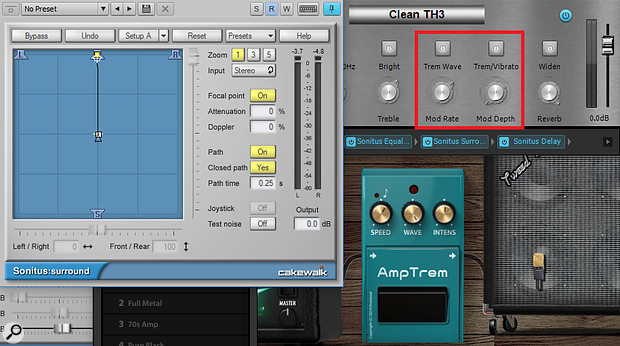 Screen 3: The Sonitus:Surround is to the left, and the TH3 AmpTrem in the lower middle. The ‘Clean TH3’ FX Chain is at the top; the added controls for vibrato and tremolo are circled in red.

Start with some prep work on the Surround module (Screen 3). Set input to stereo, and turn on Focal Point, Path and Closed Path. Hover over the centre of the 4x4 surround graph until the cursor adds a cross symbol, then click and drag upward to create a line. You should see a crosshair travelling up and down along the line. Next, insert the TH3 AmpTrem into the TH3 signal path — between amp and cabinet is typical, but by no means the only option, because the effect will vary depending on whether the tremolo is before or after any stages that create distortion, delay or reverb.

This will change the tremolo waveform: assign it to the AmpTrem Wave parameter (start 50.00 percent, end 100.00 percent). 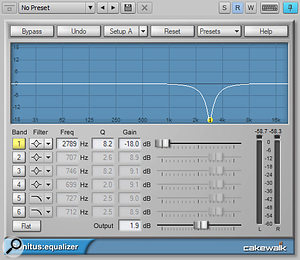 Screen 4: A notch cut at the amp’s output, between 2-7 kHz, can really refine your guitar sound.Note that the Mod Depth control cannot turn off the vibrato completely, although what remains is a very subtle amount. To turn off vibrato so there’s no trace of it, choose the Tremolo option, and then turn Mod Depth all the way down.

I’ve found very few amp sims that don’t derive some degree of benefit from a notch filter at the output; often there will be a sharp gain increase at a particular frequency that sounds almost like a kind of whistling. You may not notice it, but you will notice the improvement when it’s gone!

Typically this notch will be in the 2-7 kHz region, and you’ll want to use a fairly narrow Q. Move the notch around until the whistling goes away... then disable the notch for a surprise! Note that this will dull the overall sound a bit, but you can always compensate by increasing treble elsewhere.