We're taking a break from examining Sonar 3 to look at some useful features, available in previous versions of Sonar, that we haven't yet covered.

One of Sonar Producer's new plug-ins is the Sonitus FX wah-wah. You can sweep the wah frequency manually, trigger it for envelope effects, or have it sweep in time with a settable tempo. However, if you want to get into the real spirit of wah funkification, you'll want to be able to control the sweep with a footpedal and unfortunately, although the wah-wah's frequency can be envelope-controlled, you can't assign it to a remote control.

The secret to getting a great wah-wah sound is to duplicate a channel, throw it out of phase and vary a parametric EQ's peak frequency on only one of the channels.There's a workaround, though: Use Sonar Producer's built-in parametric EQ. But you'll also need some special mojo, as just turning up the parametric's resonance and sweeping the frequency doesn't produce a sound like a real wah-wah. That's because a parametric has a flat response, with the peak poking above it. A real wah-wah rejects frequencies around the resonant peak, the result being that you don't hear anything except the peak.

So here's the secret way to get the Shaft-approved 'Gods of Disco' wah-wah sound.

If you have the Studio Edition without the built-in EQ (or you have a previous version of Sonar), all is not lost: You can get pretty much the same sound by inserting an FX EQ plug-in into one of the channels and adjusting the controls as described above. However, like the wah-wah, the frequency can only be envelope-controlled. Fortunately, there is a workaround — albeit not a totally satisfactory one — for achieving foot control of either the wah-wah's 'wah' parameter or the EQ frequency.

Secrets Of The Track Manager 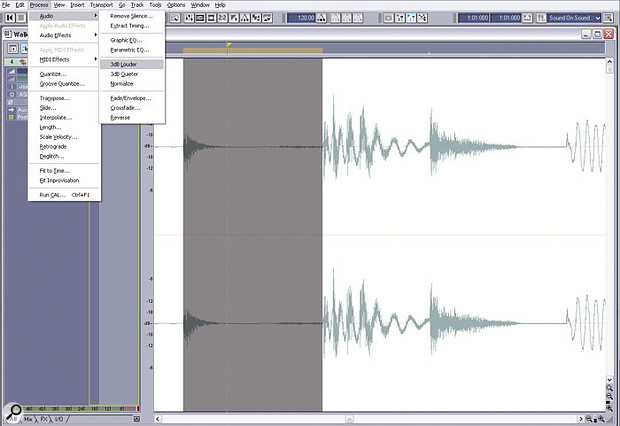 A track has been selected to be the only one shown. Here, the level of a hi-hat part from a drum loop is about to be increased by 3dB.

When Sonar first replaced the Pro Audio series, a few people complained that they missed the dedicated audio-editing window. With all audio now on the clips pane, it seemed that if they wanted a single track to fill the screen, it was necessary to do lots of zooming and resizing. Not so! Actually, there's a little-known trick that takes care of this. To turn Sonar into, essentially, a waveform editor:

Track Manager is one of Sonar's best-kept secrets. It's so convenient to hide everything except for a few strategic tracks while editing, then bring them all back when mixing.

Listen to a drum machine that was recorded direct into Sonar, or a soft synth with no processing: while the sound is clean, there's also a certain deadness. The stereo is too wide, and instruments such as drums become individual points of sound instead of being part of a cohesive, unified kit. Psychoacoustically, we're still used to instruments having some 'air', both from resonances within the instruments themselves and from the room in which they are played.

The Pantheon reverb is a great addition to Sonar, but it's optimised for larger acoustical spaces and plate reverb effects. Fortunately, Sonar has some great tools if you want to experiment with modeling smaller spaces, to add 'room ambience'. This doesn't substitute for reverb, but gives more depth and interest to the sound, even if you do add reverb afterwards.

We'll start with a single FX Delay used as an aux buss effect. Try these values as a point of departure:

Mix level should be set to 1.00 (full wet). This setup seems to work best with the short delays panned closer to centre and the longer delays panned left and right. However, even small changes in pan and delay settings can make a big difference in the sound. Remember to mix in the delayed signal sparingly; play your main track, then turn up the delay buss level just enough to hear an effect.

The effect produced by this treatment is called comb filtering, and most of the time we don't want it in our recordings. However, this effect is so tied in with the sound of miking an instrument in a small room with hard surfaces that, psychoacoustically, a little comb filtering makes our brains say "Aha! This was recorded in a small room with hard surfaces!" You can hear an example of how it sounds here: 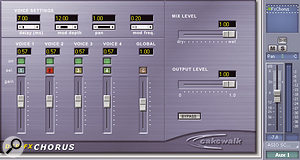 Although the FX Delay plug-in works for adding short delays to create ambience, the FX Chorus also does a great job because it allows you to add subtle modulation.Of course, you can add even more delay processors to create a more complex 'room' with additional reflections. One warning: although the whole point of this exercise is to add the phase cancellation/addition effects found in the average room, high levels of processed signal can cause excessive cancellation and can 'thin' the sound. At some point, check the main buss output in mono to make sure that the sound is still acceptable. If any thinning occurs, it will probably be in the bass range, so you may want to use EQ to add a slight bass 'bump'.

Sonar's FX Chorus effect is also useful for modelling a room ambience. This particular chorus has four delay lines, and no law says we have to use them as a straightforward chorus. The main difference if we use the Chorus, compared to the previous example, is that its modulation produces a less 'hard' and more diffused sound, so the 'room' seems a little bigger and softer. Also, the negative effects of comb filtering are less of an issue in this case (although you should still check the master output in mono). Here are some suggested values:

The slow modulation adds a bit of animation that dynamically colours the sound. To change the room characteristics, try other delay times (1-15ms), vary modulation depth and change modulation frequency. Remember, too, that these parameters are automatable, so you can alter the room sound over time.

Note that with mostly mono source material these short-delay techniques will tend to give better stereo imaging. With stereo source material, using short delays may 'mono-ise' the signal and make the stereo spread less obvious. In some situations this is of benefit, as it provides an overall sonic ambience for instruments such as drums.