Join us as we explore the unexpected creative possibilities of Reason 7's effects. 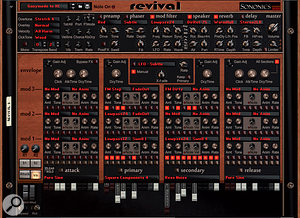 Revival is a true mould-breaker of a synth, capable of some down and dirty tones.

In last month's column we looked at using Reason 7's bundled effects devices and a crop of third-party Rack Extensions to imbue your sounds with character, attitude and dirt. There are still more ways to add vibe and looseness in a musical arrangement, though, some of which stray into 'ambient' territory. We'll look at these this month, so get ready to free your mind, man...

Adding non-musical natural or environmental sounds to a musical arrangement can lend it complexity and emotional overtones that would be hard to achieve in other ways. Try 'Horse & I' by Bat For Lashes, the summertime ambience of Air's 'New Star In The Sky', or the scraping and disembodied 'number station' voices of 'Gyroscope' by Boards Of Canada if you need some examples.

Acquiring these sorts of sound effects and field recordings needn't be hard. You could record them yourself on a smartphone or other recorder, or download audio from online libraries like www.soundsnap.com, www.sounddogs.com, or the Creative Commons-based www.freesound.org, then import the files into Reason using the File menu's Import Audio File command. Version 7 is more compatible than ever before, accepting MP3, AAC and WMA along with REX, WAV and AIFF at any sample rate and resolution. Your audio appears as new clips in the sequencer, and Reason creates new tracks for them if necessary.

With such good, smooth time-stretching quality on offer, why not make use of it to create ambient backdrops from much smaller audio regions.

As ever, clip resize and fade handles help you perform basic editing of the new audio files to fit them into your arrangement. But by dragging a resize handle while holding down the Ctrl (for Windows) or Alt (for Mac) keys clips can be time-stretched too, and that opens up more exciting creative possibilities. Incredibly there doesn't seem to be a limit on how far Reason lets you stretch a region of audio. So try cutting out a short breath noise from a vocal clip, for example, copy it on to a new track, and time-stretch it to 30 seconds or longer. It might take a while for Reason to number crunch (so keep your eye on the CALC display in the transport panel to see how it's getting on), but the results can be spectacularly good, weird, and frequently both. All sorts of amazing, unexpected textures appear.

One of the factors here is the particular time-stretch algorithm the track is using. To change that in Reason 7 double-click a clip in the track lane to edit it, and you'll see a pop-up menu in the track settings area. Experiment to see what sounds best as there are no hard and fast rules for this sort of extreme usage. 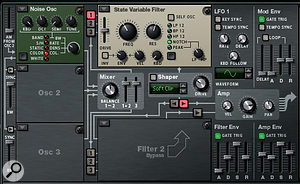 All manner of sweeps and swooshes readily emerge from simple setups based around Thor's Noise Osc.

Synthesized tones also work well for ambient effects, ranging from diffuse, unformed backdrops to shorter events such as noise 'sweep' to build excitement and usher in a new part of your song structure.

Reason's nicest noise generator is undoubtedly in Thor. Create a new instance in your rack, right-click it and choose Reset Device. Then switch its one default oscillator to 'Noise'. In the filter slot just to the right choose a 'State Variable' and increase the Amp Env sustain ('S') slider to maximum to keep the sound going indefinitely. Playing on your keyboard now reveals the basic sound of this setup, which you can start to modify substantially by switching the oscillator noise type, adjusting the adjacent knob, and also by selecting different filter modes. I'm quite partial to some Notch action for this job, with a touch of resonance dialled in to provide a bit of whistle and thin the overall effect. Then it's all about playing the filter's FREQ (cutoff) knob to animate the sweep. That responds to MIDI continuous controller #74 data by default, so if your MIDI controller can generate that you'll have knobby control.

To further nuance your Thor sweep look to the attack and release times in the Amp Env; raising them gives an ever smoother and longer start and end to the sound, respectively. Also try using the modulation matrix to add a bit of subsidiary LFO wobble of the filter cutoff frequency on top of the longer manually controlled sweep. And to heighten the trippy, spacey effects possible with this method, why not go for broke and apply a spacious, long reverb for Thor's output?

Don't be put off by the unusual concepts here; Neutron is easy to use and is equally good at ambient washes and glitch textures.

If ambient textures are remotely your bag you'll like one of the unashamedly weirdest Rack Extensions available in the Propellerhead shop, LoveOne's $35€29 Neutron Particle Emitter. This is a granular synthesis effect that cuts up the input audio into little snippets and (to use its terminology) emits new sound particles based on it. Gosh.

The unfamiliar parameters and lack of presets make Neutron less approachable than some other REs, but in fact it's quite straightforward. You apply it to an audio track, instrument, or whatever, like any other effect. Then it begins continually sampling into an eight second-long buffer. The yellow LEDs of the Buffer Status display show your signal flowing through it (from right to left), with louder sounds indicated by brighter LEDs.

Now for the fun stuff. Bits of audio in the buffer are always being regurgitated, and it's the controls in the Emitter section that determine which, and how. The Size knob varies the size of the 'window' from which audio is taken, varying from one second up to the whole eight. It's very clearly displayed by the span of red LEDs lit up in the Emitter Status display. Then the Pos[ition] knob moves the window around, from almost 'in the moment' to eight seconds back. The Spread knob is also important, controlling how spaced out in time each little sample is, from essentially continuous up to once every 100 milliseconds. Finally, the Particles section controls the character of each new sound particle. Lifetime controls how long they last, from 1 to 200 ms, while Type determines how smooth or percussive they sound, with a range of envelope shapes. Pitch lets you transpose the particles up to an octave up or down.

For the ambient 'wash' effect just take Neutron with its default settings and turn up the Size knob at least half way. Use the Dry/Wet mix and the simple low-pass filter to further vary the effect, but also try flipping the Hold switch while some audio is playing. This freezes the buffer contents so that whilst no more audio is taken in, what was already in the buffer will (potentially, at least) stay there for ever! In its frozen state you can continue to tweak Emitter and Particles knobs to explore and regenerate your sound in a way that no other device or technique in Reason allows.

Back To The Source

Reverbs with modulation of the tail (like the 'Mod Amount' parameter here in RV7000) can generate some interesting, trippy effects.

A couple of Rack Extension instruments (€79) lend themselves to more vintage, earthy sounds even before you've done anything to them. GForce Software's ReTron virtual Mellotron remains one of the most likeable third-party instruments, dripping with vibe. Meanwhile Revival by Sononics is a rare beast; a drawbar-based synth. It might be based around sine-wave generators but the range of sounds it can pull off, often using its on-board preamp and speaker emulation, have to be heard to be believed.

There's also a fine, bargain ReFill collection that fits the brief. For a mere $99 (or only $49.50 if you give them a Like or a Tweet) the 17 ReFills from www.newatlantisaudio.com include the über-ambient collections Polar Elements, Lost & Found, Transmissions and Floe, offering Combinator patches that are pitched and playable alongside more atmospheric soundscapes. In a market where you can barely move for yet another sampled Moog or dance drum collection these carefully produced, characterful and thought-provoking ReFills are like a breath of fresh air.

Long reverbs have a remarkable ability to smooth many sounds fed into them (not only synth noise sweeps), creating complex washes of sound that you could use as-is or sample for easier manipulation. For example, take a deep dark synth drone and add an RV7000 with its Decay knob turned up high and with the Wet/Dry on the soggy side. Instant additional complexity! RV7000's Arena algorithm is a good choice for this sort of thing, and Hall and Room add in a modulation option (the Mod Amount parameter) that gradually destroys the pitch integrity of the tail. It can be a beautiful or quite spooky effect.

Several Rack Extension reverbs also work well for very long drone-y, textural treatments. Synapse's $39€32 DR1 Deep Reverb gives nice results with the minimum of setup fuss. At the other end of the spectrum Rob Papen's $79€65 RPVerb offers all sorts of bells and whistles for shaping the sound, with some eminently suitable algorithms like 'wild' halls and Space Orbits.