We show you how to get the most out of Logic’s oft-forgotten reverb plug-ins.

Apple’s Logic Pro X has an impressive set of bundled plug-ins, which includes four different reverbs. The flagship reverb is, of course, Space Designer, a convolution reverb that comes with a huge library of impulse responses covering everything from small room ambiences to canyons. It is so impressive that it’s a very real temptation for users to forget all about the ‘lesser’ algorithmic reverbs on offer — but that would be to miss out on some very useful treatments. Sometimes those apparently basic, low-horsepower reverbs can pull tricks out of the bag that a convolution reverb struggles to equal. In this month’s workshop, therefore, we’ll look at all of Logic’s different reverbs and explore their strengths.

At the bottom of the pecking order is SilverVerb, a plug-in designed back in the day when CPU power had to be heavily rationed. I have to admit to neglecting this little plug-in myself, but if you spend a few minutes playing with it, you’ll quickly come to appreciate its endearing qualities, simplicity of operation being one of them.

The reverb parameters are a little unusual as, in addition to the familiar pre-delay, you get sliders for Room Size, Reflectivity and Density/Time. Those last two affect decay time, and there’s also a pair of high- and low-cut filters. What this reverb has that the others don’t is a simple modulation section that, in essence, adds some pitch variation to the reverb. You can control its speed and depth and also the phase of the modulation, which is useful for enhancing the sense of stereo width. 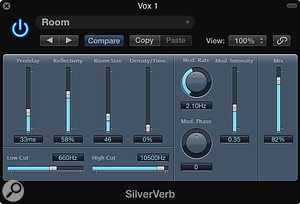 SilverVerb’s modulation control is unique among Logic’s reverb plug-ins, and can be used to enhance the sense of stereo width.

Despite the simple controls, SilverVerb makes a very adaptable vocal reverb processor capable of approximating various room- and plate-style sounds, but for me, the magic really happens when you start to pull down the Density/Time fader. The reverb then takes on a coarser character that morphs into a reverb/multi-tap-delay kind of treatment at lower settings. In some ways this reminds me of the old Alesis XTC reverb unit, where the coarseness of the reverb gave it real character. Add a little pre-delay and you can get the effect of delay, reverb and ADT (‘automated double tracking’) all at the same time. Coarse-sounding reverb patches rarely sound great on drums, but for non-percussive sounds they can be a lot more interesting than super-dense, super-smooth reverbs.

PlatinumVerb has also been around for a long time and, other than its graphical display of room shape, which can be switched using a slider, most of its controls are pretty standard. It has a variable crossover allowing the high- and low-frequency levels and decay time to be balanced, and its Diffusion and Density controls allow some of that SilverVerb-style coarseness to be added when needed. As with SilverVerb, the room-size adjustment changes the early reflection spacing, with a larger spacing creating the impression of a bigger space.

A really cool control in PlatinumVerb is the horizontal slider above the shape display, called Balance ER/Reverb. Normally this is set around mid-way, so that you hear both the early reflections and the reverb tail. However, there’s a lot of scope for creating ambience treatments by moving it to the left so that only the early reflections are audible. You can then use the Density and Room Size controls to adjust the coarseness of these reflections, while the Room Shape selection also makes a huge difference to the sound of the end result. The triangular room works well on vocals, and the pre-delay can be adjusted to create a very plausible ADT-plus-ambience effect. I’d suggest trying out the settings from the screenshot. 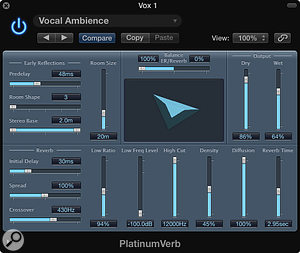 Play with PlatinumVerb’s Balance ER/Reverb slider to adjust the ratio of early reflections to reverb. Try the settings from this screenshot for an ADT-plus-ambience effect on vocals.

On percussive sounds, where the unsophisticated early reflections can sound too coarse, you can move the slider to favour the reverb tail, but don’t forget to try the Room Shape options too as they have a significant impact on the reverb’s early reflections character. For the smoothest reverb, set both Density and Diffusion to maximum and, for the least aggressive early reflections, pick a room with more sides.

EnVerb is another hidden gem. In the early days it came with a warning that it used more CPU power than the standard algorithmic reverbs. With today’s computers that is hardly a concern, unless you go mad with the automation, which still seems to take up more than its fair share of CPU resources. As the name implies, EnVerb shapes the envelope of the reverb tail. The controls are very similar to what you’d find in a synth’s ADSR section, except that you also get a Hold Time control. 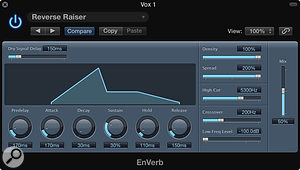 EnVerb might not be something you use all the time, but it can create effects that no other Logic plug-in can.

By changing the shape of the envelope, you can create gated reverbs or reverse envelopes, and you can also delay the dry signal using a separate slider. This time the fun control is Density. Turned right up, the reverb is plausibly thick, but as you turn it down, the individual delays that make up the reverb become more discernible, creating a kind of glitch effect that could be deployed to great effect in dance music. Drop the Density even further and you get a very metallic ‘tunnel’ resonance, again useful as a spot effect in certain musical genres.

Despite the power of today’s computers, adding automation to the Density control seems to tax the computer more than a little, and on my MacBook Pro the audio drops out altogether whenever I try it. Therefore, a good strategy for automating glitch effects is to set up two or more EnVerbs in the signal path, each set to produce a specific effect, then simply automate the bypass switches to bring them in and out as needed. Alternatively, you could feed them from a number of aux sends and automate those.

A less radical application might be to create a delayed, slow-attack reverb to mix with a conventional reverb. This can create the effect often heard when two large spaces are linked, such as in some cathedrals, and where the reverb from the second space comes back as the reverb from the first space is dying away.

EnVerb isn’t something you’d use all the time, but it is worth spending a bit of time experimenting with it just to see what it can do, as it can generate effects than none of Logic’s other plug-ins can.

That leaves Space Designer, the ‘big gun’ of the reverb arsenal. The main strength of convolution — the underlying principle of Space Designer — is that impulse responses, or IRs, can be captured from real spaces, allowing the acoustics of those spaces to be added to your own recordings. Having a large library of impulse responses, as you get with Logic Pro X, means you have plenty of choice: you can select from traditional music environments such as clubs, studios and concert halls, or you can place your composition in a forest, a canyon or a multi-storey car park. 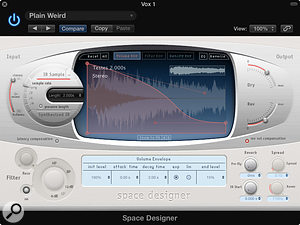 Space Designer is Logic’s flagship reverb plug-in, and while it doesn’t allow pitch modulation, it does let you import your own impulse responses.

The other limitation is that convolution of this type can’t capture things like pitch modulation, so if you take an IR from an existing hardware reverb that includes an element of pitch modulation, as many do, that aspect of the reverb’s character will not be captured.

Space Designer allows you to import third-party impulse responses and, once imported, you need to save the result as a Space Designer user preset, giving it a suitable name. One of the most popular IR sets doing the rounds at the moment is taken from Bricasti’s excellent Model 7 algorithmic reverb — apparently, Bricasti are OK with this as it helps get their name out there. I tried loading these into Space Designer and, as long as you have the patience to load, save and name each preset, the end result is well worth the effort. Even though any modulation elements are omitted, the quality of the reverbs is still excellent.

You can also get into more surreal areas by importing short audio files (say, up to five seconds) and using those in place of reverb IRs. The convolution process can produce some very interesting and often abstract results. Sounds that decay work well for this purpose, such as cymbal crashes, anvil strikes, clock chimes and so on. Importing is simple enough: you just drag and drop the audio file or third-party impulse response (mono or stereo) into the IR window in Space Designer.

So that’s it, a lightning tour of Logic’s reverb plug-ins. Space Designer may be the go-to reverb when you need absolute realism, but there’s a lot more creative potential in those apparently second-division algorithmic reverbs than you might at first imagine.