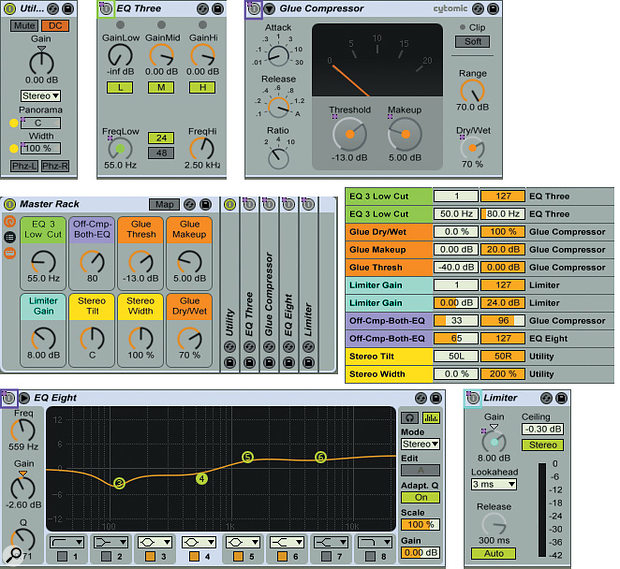 Screen 1: The main settings for the five audio effects in this Master track Audio Effects rack are mapped to the rack’s Macro knobs. Make other settings directly on the devices.

Get your mix ready for mastering in Live.

All the hard work you’ve devoted to recording and mixing your tracks comes together on the Master track, and the effects processing you do there can make or break your song. The term ‘mastering’ is often used for this process, although mastering is a broader topic and is more often used for preparing multiple songs to make a consistent playlist for uploading, burning CDs or other purposes. There are practically as many people giving opinions about mastering and whether to leave it to a professional as there are people asking the question. SOS contributor Mike Senior offered some worthwhile advice in the Q&A section of the July 2011 issue and this salient quote bears repeating, “If your mix doesn’t already sound finished to you, mastering is very unlikely to remedy that.”

This month we’ll look at how to make your mix sound finished to you using Live’s audio effects on the Master track. At the end, I’ll show how to easily apply the same techniques to mastering a playlist containing multiple songs.

Screen 1 shows the Audio Effects rack on the Master track of my default song. The specific effects and the order in which they’re arranged are not as important as ensuring that something in your Master Rack, be it a Live or third-party device, accomplishes each of the tasks here. The devices, their order and their settings are all up for grabs, the object being a mix that sounds good to you. Here, in their order in my Master Rack, are the five devices and their purposes:

2. EQ Three: cut unwanted bass. Use 24dB mode to avoid colouring the other bands. Macro knob 1 sets the low-band frequency cutoff (50 to 80 Hz range) and turns the effect off when fully anti-clockwise. Although there’s no absolute rule, other EQ processing usually follows compression.

4. EQ Eight: final EQ. Start with the four active bands, which are in Bell mode (boost/cut filter with a bell-shaped curve) and activate the outer bands as needed. Notice that you can click the headphones icon on the upper-right to hear only the effect of the band being adjusted. Macro knob 2 selects from four EQ Eight and Glue Compressor options: both off, compression only, both on and EQ only. Use that to separately audition the effect of EQ or compression while editing.

5. Limiter: raise the level of the mix while applying brick-wall compression to prevent clipping. Moving Macro knob 5 clockwise makes your mix louder. That comes at the expense of dynamic range, so it is best done with care and with good metering. 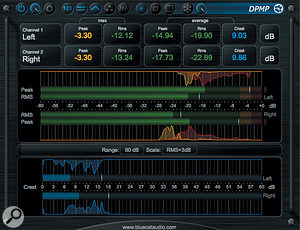 Screen 2: Blue Cat’s DP Meter Pro measures peak, RMS and Crest factor settings for numerical, meter and histogram display. You can customise behaviour and export the graphs as automation.There are two ways to deal with effects on the Master track. One is to enable devices and adjust their settings only after you’ve created and mixed all or most of the song’s tracks. The other is to tweak the Master Rack’s settings as you build the song. I tend to leave most of the devices off until I’m well into the song and to not use the Limiter nor adjust the stereo image until the very last. I’ll enable Glue Compressor fairly early, starting with the Dry/Wet and Makeup settings shown and adjusting the Threshold as I go. EQ’ing comes later in the cycle, except for the EQ Three bass cut, which I enable as soon as it is needed.

Metering is a critical component in finalising your mix, and while Live’s Track Volume meters are adequate, more detailed information is helpful. One of my favourite third-party metering plug-ins is Blue Cat Audio’s DP Meter Pro. It offers peak, RMS and Crest factor (peak-RMS averaging) meters along with histograms adjustable from 1 to 1000 second intervals. You can customise most aspects of the display and even output the generated graphs as MIDI or automation data for controlling other plug-ins, or as a visual history automatically aligned with the waveform graphic.

When you want to create a playlist from several of your songs you may find that their final mixes need some editing to make them fit together. This is very easy to set up in Live if you’ve used a rack similar to the one described here on the Master track of each song. In a nutshell, the idea is to export each of the songs with that rack turned off, and then to import the exported songs along with the rack from its Master track to separate audio tracks of a new Playlist song in Live. Here are some tips to make that go smoothly. 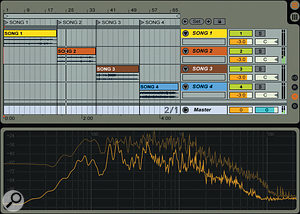 Screen 3: Here is a setup for creating a playlist from four songs for MP3 encoding. Live’s Spectrum effect is displaying the frequency spectrum for Song 2.The exported songs played through their original Master Racks on Playlist song tracks will sound the same as they do in the original Live songs, and you can make small adjustments so that the songs fit well together. (When major changes are needed, return to the original Live song and edit the mix.) Each song’s levels will be controlled by its track’s level in the Playlist song. Use the Playlist song’s Master level to control your monitoring level.

A good first step in setting up the playlist is to ensure that each song’s Master Rack has the Limiter turned on, that all the Limiters have the same Ceiling setting (0.30dB by default) and that each Limiter’s Gain is set so that the output at least ‘touches’ the ceiling. The Playlist track volumes will now control the peak volume of each track. Typically, you’ll want those to be the same, for example -3dB for MP3 encoding. Use the individual Limiter gains to adjust the perceived song levels to your taste. Now play the playlist and adjust the individual Master Rack settings as needed to make the songs work well together. It’s a good idea to listen to the full playlist away from the computer and to devote several sessions to the process, taking time off in between. It is sometimes helpful to capture a small segment of each song in a Session view clip slot so as to make quick comparisons.

Once you have finalised the playlist, you can print the songs individually by selecting them one by one in the Live arrangement and then exporting each — the export range will automatically match the selected area. (If you want to include the gaps between songs, select the space between your start locators.) The Export dialogue defaults to exporting the Master track, which is fine as long as the Master track holds only metering effects and its Volume is set to 0dB. As an alternative, you can select individual tracks for exporting in the Export dialogue.