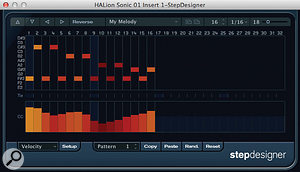 The StepDesigner interface with note data in the upper section and controller data (in this case velocity) in the lower one.

Recently, I had the pleasure of working with Sugar Bytes' excellent Thesys MIDI step sequencer plug-in. Thesys provides multiple lanes for each sequence, holding note data, velocity, pan and other MIDI controller data that can be used to control various synth parameters, and one of the really interesting features of Thesys is that you can change the step length of each of these lanes independently, allowing you to develop all sorts of evolving sounds. In short, there's a lot of fun to be had here and, as a Cubase user, it got me thinking: could the humble StepDesigner MIDI plug-in that comes bundled with Cubase be pressed into service to do something similar? 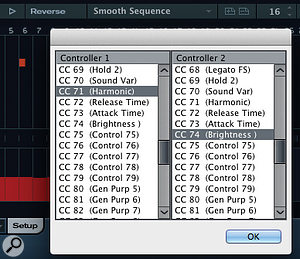 Aside from velocity and gate (note length), you can also pick two other continuous controller numbers to build into your patterns.

StepDesigner might not win prizes for elegance, but it is straightforward to use. It's placed as a MIDI Insert on the MIDI track that drives your target synth and, once opened, provides two main panes for editing: the upper note area and the lower controller lane. Patterns can be up to 32 steps in length and you can adjust this and the timebase of the steps (1/16th, 1/8th, for example) via the narrow control panel that runs along the top of the window. Other useful options include a swing control and buttons to shift the pattern left and right or reverse it and shift the notes up and down an octave.

Each instance of StepDesigner can contain up to 200 patterns. The current pattern number is indicated in the control strip at the base of the window and, during playback, MIDI notes can be used to automate pattern changes. Sets of patterns can be saved as presets for later recall.

Notes can be added to the pattern grid via the mouse. You can also click and drag to enter multiple notes, while the range of pitches displayed can be scrolled up and down if you want to enter higher or lower pitches. Notes longer than an individual step can be added via the Tie lane (between the Note and Controller lanes) and, for notes shorter than a step, you can add controller data to the Gate lane. Simply select Gate from the drop-down menu and draw in controller data to define note lengths. This menu allows you to toggle the controller lane between four sets of controller data: velocity and gate, and two, user-defined, continuous controllers. Note that velocity and continuous controller (CC) data is added here in the same way.

Your choice of which two CCs you use is configured via the Setup button. This selection box simply lists the CC numbers, so you'll need to check your target synth's MIDI specifications to work out exactly which CC numbers you require. In my example project I used Halion Sonic SE. 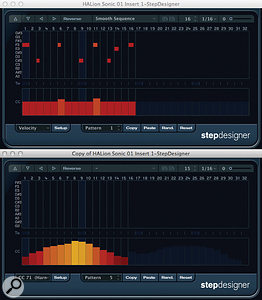 As described in the main text, pairing two StepDesigner patterns of different step lengths allows you to create some interesting evolving sequences.

Used as described above, StepDesigner is a perfectly respectable pattern sequencer, but as all elements of the pattern (notes, velocity, gate and CCs) operate to the same number of steps, you can't create the 'different step length' effects possible in Thesys. So, I thought, how about using two (or more) instances of StepDesigner, all targeting the same synth, but set to different step lengths? Well, perhaps this wasn't what Steinberg had in mind (for reasons that will become obvious in a minute) when creating StepDesigner plug-in, but it can be made to work. There are, however, a couple of limitations... You're limited as to where you can insert your additional StepDesigner plug-ins. You might think that the obvious location would be the MIDI Insert slot beneath your first instance of the plug-in, but this doesn't work because the MIDI note output from the first StepDesigner instance is interpreted as program change data by the second instance, and CC data just doesn't seem to be passed at all. So you need to create a second MIDI track, with its own StepDesigner inserted, that targets exactly the same synth. In this way, the two instances of the plug-in do not interfere with each other (well, they do, but I'll come back to that issue in a minute) so both sets of StepDesigner data get to the synth.

The screenshot shows an example setup, with a 16-step pattern of notes playing in one instance of StepDesigner (top) while a second instance (bottom) is sending CC data to Halion Sonic SE's filter resonance in a 15-step pattern. Both patterns play back continuously and in sync with the project but, on each cycle through, the shorter filter cutoff pattern is offset by a single step relative to the note pattern. As a result, instead of the relationship between the notes and filter sweep staying constant, they change over each cycle and, in this case, only start to repeat after 15 cycles. 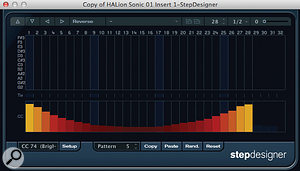 Changing the Step Length setting — in this case set to 1/2 — provides further variation.

You can, of course, add a third MIDI track and a third instance of StepDesigner, and then use this to set another synth parameter in motion over a different pattern length. The next screenshot shows a 28-step pattern set to vary Halion Sonic SE's filter cutoff. However, there's an extra trick employed here: the step size setting has been set to a half rather than a sixteenth. Each step in this instance of StepDesigner, therefore, lasts for half a bar and the whole 28-step pattern for 14 bars. Combine this with your two other levels of variation from the first two tracks and, well, it makes my head hurt trying to calculate, so let's just say the variation in the synth tone cycles over a long period! If you target a suitable combination of synth parameters and step lengths in this way, the sequence can take on a real ebb and flow, and the effect can be very cool indeed; it certainly avoids some of the 'rigidity' that's often associated with poor electronic music.

StepDesigner's velocity and gate lanes can only be used when that instance of the plug-in is also sending note data (the velocity and note length data are part of the MIDI data passed with each note) but, as mentioned earlier, StepDesigner allows you to select two CCs of your choice to use in the other two lanes. You might think, therefore, that using two instances of the plug-in would give you four possible synth parameters to tweak and three instances would provide six. That's what I expected when I started experimenting, but found that it's here you're confronted by a second limitation.

I'm not sure if this is a 'feature' or simply a bug (I'll let you decide!) but, regardless of how many StepDesigner plug-ins you have active in your project — even if they are targeting different MIDI synths — they all seem to share the same two CC numbers. If you select a CC combination in one instance of the plug-in, the changes you make are applied to all instances (at least, that's my experience using Cubase 7 running on Mac OS X). It's almost as if the two CC numbers are stored at a Project level (they apply globally for that Project) rather than at a plug-in-level (applying just to that instance of the plug-in). I've not found a way around this, so it means that two CC numbers per project are all you can control via StepDesigner. 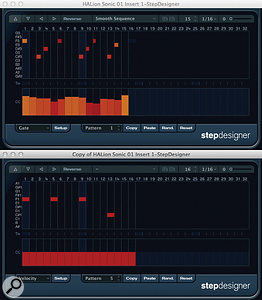 That may be disappointing, but there is one extra trick the plug-in can perform that Thesys (at least a single instance of Thesys) can't, which is to combine note sequences with different step lengths. This might sound like an odd thing to do but it can create some really interesting rhythmic and melodic results, with an effect that's not unlike singing in the round. The final screenshot shows an example. Both instances of StepDesigner are targeting the same synth, but use different MIDI tracks. The lower one is playing a very simple 16-step pattern of four notes, and provides a solid bass that syncs, without fail, to the project tempo. The upper pattern contains a more melodic phrase at a higher pitch and uses a 15-step pattern. As the patterns are repeated, the melody phrase gradually shifts one step at a time relative to the bass notes. The effect can be almost hypnotic — a solid bass and a repeating, but somehow 'moving', melody — with the synth tone itself also shifting if you apply some CC control as described above.

With modern music technology, the user is often spoilt for creative choice and it's refreshing to take a simple tool and see just how far you can push it. StepDesigner might not be one of the more whizz-bang elements of the Cubase feature set but, despite the occasional quirk, with a little lateral thinking it's capable of great things.