Logic's processing tools can be used to manipulate stereo width, adding interest to your mixes.

Manipulating the stereo width of different parts of a mix is a processing technique that's central to contemporary mixing. Stereo width processing can make a lead vocal sound huge in a chorus, or move a synth pad to the far reaches of the stereo field. Check out Timbaland's 'Give It To Me' to hear judicious use of such processing in a commercial track.

To help you judge the stereo difference and mono components of a mix separately I would strongly recommend getting hold of an M/S (Mid/Side) plug‑in, to allow you to solo the mono or stereo‑difference aspects of your mix and listen to them in isolation. Both Brainworx's excellent BX Solo and Voxengo's MSED are free to download (a quick Internet search should turn up both of them quite easily). Then I'd recommend playing a few of your favourite commercial mixes through BX Solo (for instance) and listening to the mono and stereo-difference components in isolation, to identify the elements that professional mix engineers have applied stereo treatment to, and hear how these treatments can change from one section of a song to the next.

In this article, we're going to look at some of the different processes we can use to add stereo width. One sound source you might wish to try stereo‑width expansion on is lead vocals, particularly in the chorus section of songs, so call up a Logic project containing a vocal recording and try these processing ideas on the lead vocal track.

The simplest method of increasing the stereo width of a part is to apply a stereo delay, with different delay times on left and right channels. To do this:

Now let's set the delay time of our two delay taps to different values and pan them hard left and right.

Soloing the stereo difference component really allows you to zero in on how much the processing is affecting the stereo width, and also whether it's having an effect on the timbre of the sound. 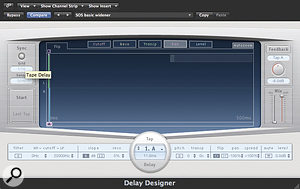 Delay Designer is the perfect tool for creating stereo widening effects based around delay and pitch-shifting.

A variation on this type of process is to add a little pitch shifting to each side. One of the great things about Delay Designer is that you can independently process each delay tap. Go to the Transpose setting for delay Tap B and set it to +5c, and for Tap A, ‑5c. Again, audition the difference with the Brainworx Solo plug‑in.

To change the tonality of the processing, we can also filter the delay taps to remove the highest and lowest frequencies from the processed signal. Go to the Filter section (at the bottom left of the plug‑in) and, for each delay tap, set the high‑pass filter cutoff to 400Hz and the low‑pass filter cutoff to 5000Hz. Once you've saved your settings for a basic pitch‑shifting delay, it's worth moving on and experimenting with adding more delay taps with differing delay times and pitch‑shifting amounts, to create variations on the same effect.

One of the most commonly used plug‑ins for adding stereo width to vocals is Waves' excellent Doubler plug‑in. Although we can't recreate Doubler, we can create a simplified version of it in Logic using two Tape Delay plug‑ins and two buses, though it requires a little fiddling! Here's how:

Logic's selection of modulation processors can also be great for adding stereo width to a part. A particular favourite of mine for this is the Ensemble chorus. Let's set up the Ensemble effect to achieve a wide, thick chorus‑modulation effect.

Early-reflection presets on reverb units have often been used by mixing engineers to increase the stereo width of a part. Chris Lord‑Alge, for example, talks about using the early reflections preset from a Yamaha Rev5 for this purpose. We can use Logic's ample suite of plug‑ins to accomplish similar things. Again using a lead vocal part, set up a new bus on that channel. On that bus, call up an instance of PlatinumVerb. To hear just the early reflections in PlatinumVerb, set the Balance ER/Reverb slider fully left. You can now adjust the spacing of the early reflections, using the Room Size parameter. Setting Room Size to six metres creates tightly spaced delays, whereas larger values will sound more like slap‑back delay.

Set the Stereo Base to 2.0m so that you have the widest‑sounding reverb possible. Altering the Room Shape will also significantly change the sound of the early reflections. The advantage of using early reflections is that they not only add stereo width, they also create a sense of room ambience and depth in otherwise dry sources.

All these processes do the same basic job of adding stereo width to a signal, but all sound different, and some work better on certain sources than others. As a final note of caution when using these processes, always check your mix in mono to make sure that no unpleasant phase cancellation occurs.