Steve Jobs' tenure was a period of unprecedented innovation. So, in a world already wowed by Apple, how will Tim Cook fill his shoes? 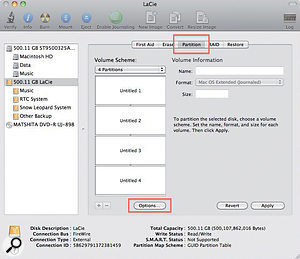 To partition a disk, choose the Partition tab, but make sure you click Options to check that the GUID Partition Table has been chosen as the partition scheme.

As I write, it's strangely quiet on the Apple news front. We have become used to an annual music-related announcement in early September, usually involving iPods, iPhones, or a new way of buying the music of some obscure Liverpudlian beat combo, but it hasn't happened so far this year. This isn't to say that Apple are having production difficulties: the absence of the usual autumn announcement is more likely to be related to the recent and very public change at the very top of Apple's management.

As you're unlikely to be unaware, Steve Jobs, who co-founded the company in 1976 with Steve Wozniak, and returned as CEO in 1997, has resigned, and been replaced by former COO (Chief Operating Officer) Tim Cook. As the iconic presenter of Apple's innovations at trade fairs and, more recently, the Worldwide Developers' Conferences and 'special events', Jobs and his "and just one more thing...” routine is going to be a tough act to follow.

Let's not forget that when Jobs took the reins back from Gil Amelio for an annual salary of $1, the company was going through a bad patch: the computers were beige, the OS had been licensed to third-party manufacturers of beige boxes (not that I'm bitter about that clone I bought in 1996, you understand), and Apple were losing money hand over fist. The first computer that Jobs and his design partner, Jonathan Ive, launched after his return was the Bondi blue iMac. In a beige world, this was an entrance! Apple stopped making cameras and printers — also beige — OS licensing was halted, and their next release was the tangerine-coloured, handbag-shaped iBook. Now that's a statement. It's difficult to imagine anyone making such an impression some 14 years later: a new innovation after a decade of iPods, iPhones and iPads. What has Mr Cook got to work with? iCloud is changing the way we use computers, yes, but you can't really hold it in your hand at a press launch. Unless the new iPhone 5 is tangerine coloured and lighter than air, I wouldn't want to be the one to walk out onto that stage.

To Steve Jobs, meanwhile, we should say thanks for a fantastic 35 years of innovation. We're in a good place as creative musicians, partly thanks to him. 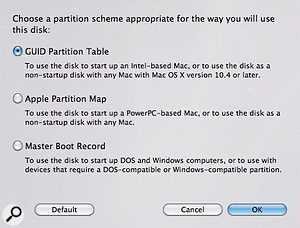 Yes, it's time for my regular reminder. Our computers are getting smaller, but can store more data. They're getting faster and, possibly, more reliable, but every now and again, something happens that makes you curse the fact that you haven't got a reliable and regular backup routine.

A company I do some work for allowed me the long-term loan of a MacBook Pro recently, which had been re-imaged with a strange and limited range of applications, and wasn't supplied to me with its original grey install DVD. No problem, thought I. Remembering that OS 10.7 Lion is a downloadable upgrade requiring an already installed copy of Snow Leopard, my plan was to boot from the generic Snow Leopard install DVD I have at home and start from scratch — but no dice! It turns out that, at the point when Thunderbolt technology was added to the MacBook Pro line, the Snow Leopard DVD became obsolete, so a trip to the Apple Store ensued, where a very helpful genius reinstalled OS 10.6.8. He also pointed out that the machine was covered by a free upgrade program to Lion, which is something you might want to check out if you are the owner of a recently purchased Mac with Snow Leopard installed, and want to move up without charge (take a look at www.apple.com/uk/macosx/uptodate).

My first action on returning to base was to back up this operating system to an external drive. For this, I chose to use the venerable Carbon Copy Cloner (from www.bombich.com), but the challenge wasn't over. For some reason, the drive I had earmarked for backup was partitioned using the Apple Partition Map, and CCC rightly complained that the resulting cloned OS might not be bootable. A fraught couple of hours spent finding spare pockets of disk space on other computers to temporarily store the files from the other partitions of the external drive ensued. This was so that I could then repartition the drive with the GUID Partition Table map scheme (easily achieved using Disk Utility), and I narrowly avoided a soul-destroying trip to my local computer store for more hard-drive space.