Following the death of Steve Jobs, we reflect on the life of one of the most influential technology pioneers of our generation. 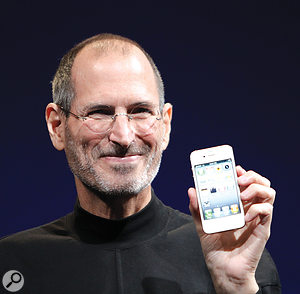 Steve Jobs, the co-founder and Chairman of Apple Inc., passed away on October 5, 2011, aged 56. It's rare for one person to affect the lives of so many, but there can be few computer users or music fans untouched by his work. Whether one is a Mac user or not, the technologies Jobs helped to shape over the last 35 years have dramatically impacted the way musicians use computers.

A Place For Music

Jobs originally co-founded Apple Computer, Inc. in 1976 with Steve Wozniak and Ronald Wayne. However, after launching the Macintosh in 1984, Jobs left the company a year later following a boardroom disagreement with Apple's then-President, John Sculley, and founded a second company called NeXT. Aimed at the higher education and workstation markets, NeXT's iconic, cube-shaped computer was also a musician's dream. It was one of the first computers to offer CD-quality sound with an on-board DSP chip, and this prompted Jobs to unveil the machine at San Francisco's Davies Symphony Hall in 1988. To demonstrate the NeXT Computer's musical abilities, Jobs invited a violinist from the San Francisco Symphony Orchestra to perform Bach's A-minor Violin Concerto, with the computer playing a synthesized accompaniment.

When someone later asked about the release of the NeXT computer being delayed by a few months, Jobs replied that the machine was already five years ahead of its time; he wasn't kidding. In a 1989 paper published in MIT's Computer Music Journal, two NeXT engineers described the advanced sound and music functionality in the NeXTStep operating system. Not only was there an understanding of musical structures, but developers could also create instruments that ran on the built-in DSP hardware. The acknowledgements at the end of the article read like a Who's Who of the computer music field at the time, with the last line affirming that "Steve Jobs and Bud Tribble [one of the original Mac developers and NeXT's then Vice-President of Software Development] made a place for music at NeXT.”

Steve Jobs would go on to make a place for music at Apple as well. In 1997, he returned to the company he had co-founded after Apple acquired NeXT to use NeXTStep as the basis for what would become Mac OS X. And although Apple's future was anything but certain at the time, Jobs would be responsible for what has since been described as the greatest second act in business. After revitalising the Macintosh with the iMac in 1998, Jobs unveiled iTunes and the iPod music player in 2001, along with the iTunes Music Store in 2003. These successes would give Apple the capital and mind share to both increase the Mac's popularity, and to launch a new mobile computing platform in 2007.

Arguably, Steve Jobs' greatest achievement was to make powerful and complicated technologies accessible to 'the rest of us'. The Apple II took computing away from mainframes, and the Mac made computers so easy to use that even musicians and audio engineers started to like them! However, it was the application of this philosophy to software that perhaps made the biggest difference.

In Alan Deutschman's 2001 biography, The Second Coming Of Steve Jobs, there's an interesting story about the early days of Pixar, the 'other' company Jobs had founded before returning to Apple. Before Pixar became the animation studio it is today, Jobs had considered the possibility of using Pixar's technology to enable anyone to create 3D art. Although this idea wasn't practical at the time, it again demonstrated Jobs' passion for bringing creative tools to the masses. Years later, Jobs would indeed be successful with this strategy, using Final Cut as the foundation for iMovie, and Logic as the basis for GarageBand. At the introduction of the iPad 2 just this year, Jobs was visibly moved as he reflected on how incredible it was to bring these applications to such a device.

There is no simple way to sum up such an extraordinary person as Steve Jobs, who, like his companies and products, stood at the intersection of technology and the arts. The world seems a little less colourful now that we know Jobs is no longer part of it. However, the world will be forever different because of him; and I, like so many others, will forever be grateful, hungry and foolish.