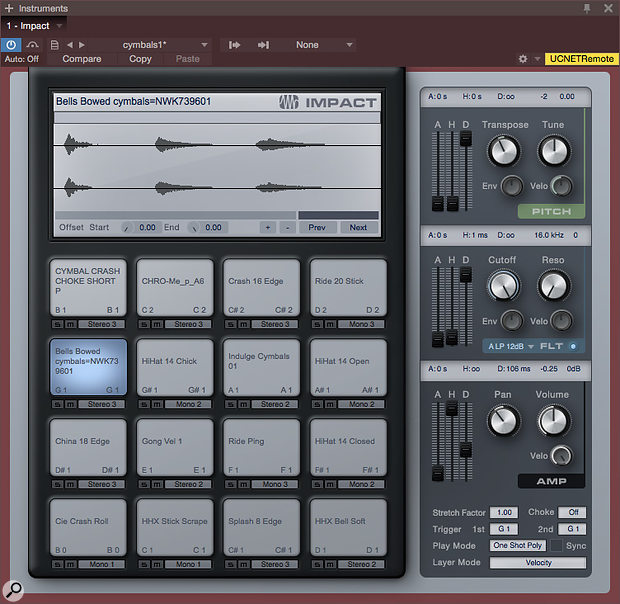 An Impact kit entirely devoted to cymbals and cymbal effects: ride ping and bell, crashes, chokes, stick slides, rolls and so on. Most pads have more than one sample. To the processor, Impact does not have a heavy impact, so several instances, such as this cymbal kit, can easily be used in a song document.

Studio One’s Impact drum machine has hidden depths that are well worth exploring.

Impact is one of the virtual instruments that has been bundled in Studio One since its earliest days. It might look like a standard drum machine, but Impact has some cute tricks up its sleeve (drum machines have sleeves, right?), a number of which are not documented very well (or at all). This month, I’ll share some of them.

A drum machine is a sample player optimised for playing percussion sounds and making beats. PreSonus bundle quite a few kits with Impact, and more are available from third-party developers like MVP Loops and The Loop Loft, but making your own kits is as easy as dragging individual sounds from Studio One’s browser and dropping them on Impact pads. 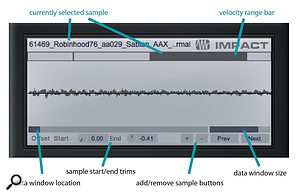 Impact’s sample editing includes a zoomable waveform display, velocity switching, sample trimming, and auditioning of a sample by selecting it in the velocity range bar.A sample can be trimmed to remove silence at the beginning and/or end using the Offset Start and End settings below the waveform display. Getting these trims right often necessitates zooming in and out on the data, and Impact hides the tools for this in plain sight. A long and a short bar run immediately below the waveform display; the shorter bar on the right sets the size of a window on the data, while the longer bar on the left moves that window through the full length of the sample.

Each Impact pad can trigger up to four different samples, which opens many possibilities. The most common and obvious use for this is velocity switching. Perhaps you want samples of a snare drum being hit very quietly (pp), fairly quietly (p), kind of loud (f), and really loud (ff). Adding samples to a pad is as easy as holding down the Shift key while you drag and drop the sample onto the pad. Each sample is added to the high end of the velocity range, so plan how you want the samples laid out in the velocity range and drag them starting from the quietest sample and working up to the loudest. A sample can be removed by clicking it in the velocity bar and then clicking the ‘minus’ button to the right of the Prev button below the waveform.

By default, the full range of velocity values is evenly divided between the samples dropped on the pad. The range assigned to each pad is visible in the bar above the waveform display. Clicking in the velocity range bar plays the sample assigned to the range you click. However, equally sized velocity ranges for each sample are rarely desirable in practice, at least, when any amount of realism is the goal. Generally, it is better for relatively few hits to sound the very loudest and softest samples, while most hits trigger the middle samples. The best range sizes will vary depending on the sounds, controller, musical genre and your playing style. Thus, you will usually want to customise the velocity range assigned to each sample. This is easily done by dragging the range boundaries in the velocity range bar.

But there is more than one use for having multiple samples on a single pad, which brings us to another of Impact’s clever tricks. Click the Layer Mode field in the lower right corner of the Impact window and you will find that Velocity is but one of three ways Impact can use samples layered on a pad. Round Robin simply steps through the samples, sounding the next one in the list with each hit before cycling back to the first and so on. You are not required to have four samples on a pad, and I sometimes use only two in Round Robin, so that the pad alternates between them. For instance, I might load up a ride cymbal and a cymbal bell strike for playing an eighth-note ride part. Then I need only program my eighth notes to get a funky part with the cymbal bell on offbeats and a ride on the beat.

The other Layer Mode choice is Random, a mode in which, as you would expect, each strike causes one of the stacked samples to be chosen at random and played. This can be useful just to introduce variety different from that created using velocity sensitivity.

Although Impact is intended for playing drum and percussion sounds, you can load any sample you want onto a pad. Loading longer samples makes Impact function as a triggered clip playback system. I haven’t had the patience to find out if there’s an upper limit on the length of the samples that can be loaded, but if you’re going down this road, there are a few things you should know about the block of controls in the lower right of the Impact window. 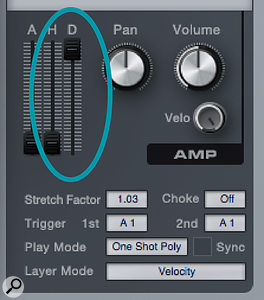 The key to using long samples in Impact is the Decay slider, which must be all the way up to play a very long sample.The Play Mode field has a drop-down menu with four choices. One Shot Poly plays the entire sample, with additional triggers starting additional copies playing; One Shot Mono plays the entire sample, with additional triggers cutting off and restarting playback. In Toggle mode, the first Note On message starts playback and the next stops it, while in Note On/Off mode, the Note On message starts playback and a Note Off message stops it. What all of these modes have in common is that they are supposed to allow playback of the entire sample — but the length of playback is actually determined by the AHD envelope controls in the amp section just above.

Given that, you might think that to play back a two-minute long sample you need only slide the Hold slider all the way up, where it displays an infinite hold time value. In fact, however, that only enables playback of about 10 seconds. Darn! Here’s the secret: slide the Decay slider all the way to the top. As I said, I can’t say just how long it will play, but the 20-minute sample I started in Toggle mode as I was writing this has been toodling along for well over 10 minutes so far.

Impact does not have all of the processing resources of Studio One’s Presence virtual instrument, let alone the editing and processing of a full-featured sampler like MOTU MachFive 3 or Native Instruments’ Kontakt. But it does have a few nice sample-shaping features. One such is the multimode filter on every pad, offering three different variations each of low-pass, high-pass and band-pass responses.

The filter for each pad can be selected from a list of nine different filter types.I like the sound of these filters on drum samples, and combined with the hard-wired envelope and velocity modulations, they can produce some great sounds. For one project, I dragged a left/right pair of snare samples onto two pads, applied a band-pass filter with cutoff modulation to the left-hand stroke sample only, and panned them slightly left/right, just outside of the centre: a great sound, quickly arrived at. The high-pass filter, likewise, can produce great variations on a sample. Creating variation with filters is very useful when you have only a single sample of a sound.

The Stretch Factor field in the bottom right corner of Impact is another fun resource. It is actually a playback rate control, a speed multiplier. You can set this parameter within a range from 10 (plays 10 times normal speed) down to 0.1 (10 times slower than normal speed). Try applying a setting of three or four to a cymbal sample for a complex and interesting sound. Interestingly, Stretch Factor appears to be the only parameter besides sample start and end that can be set on a per-sample basis, rather than on a per-pad basis.

Impact demands surprisingly little processor power, which opens the door to using multiple instances. One instance might be dedicated to snare drum: left and right hand strokes, rim shot, side-stick, brushes, rolls… the works. A second instance might be for cymbals. You probably won’t need a dedicated instance for kick drums, but, hey, I once saw the great Billy Cobham playing with 10 kick drums.

People often make beats by adding parts while a sequence loops. The Track / Transform / Transform to Audio Track command lets you capture what you have recorded this way. I sometimes do that to get an audio rough I can play with. When you are ready to perform the final mix, choose the Event / Explode Pitches to Tracks command for easy processing and mixing of each element separately. Doing so also makes it easy to archive parts by transforming each track to audio when the project is done.