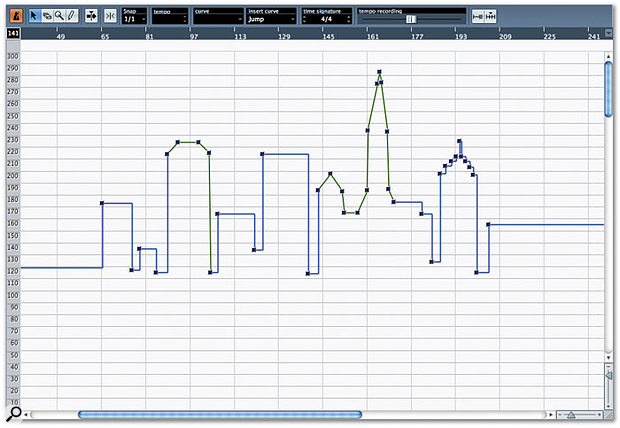 The Tempo Editor: since I spent that fortnight lost in the Nevada desert, I've noticed some curiously avant-garde developments in my compositions... :-)

Cubase 's Tempo Editor offers some powerful ways to manipulate tempo and time signatures in your Projects. This month we take a detailed look at these features.

It might be an interesting study to see how much music has been written with a fixed tempo of 120 bpm in four/four time over the years, just because this is the starting point presented to the user in almost every sequencer of the last 20 years. Fortunately, though, Cubase includes many powerful features for manipulating time in a Project, whether you need to implement structural changes, expressive changes, or you simply want to hit the right cut in a reel of video. In this month's Cubase Technique article we're going to be looking at the first two of these: how to work with tempo and time signatures for musical purposes in Cubase.

The Master + Sync section of the transport panel (to the right of the main transport buttons) has a Tempo section in the middle that indicates the tempo and time signature in the Project at the current position of the Project Cursor. The Tempo Track button itself, as with the Click and Sync buttons, toggles whether the Tempo track is active or not — if the Tempo Track button is disabled, Cubase will ignore the Tempo track completely and use a fixed tempo for the whole Project. Indeed, if you toggle the Tempo Track button you'll notice that when it's active the word 'TRACK' appears next to the button, and when it's disabled the word 'FIXED' appears instead.

In order to set the fixed tempo, make sure the Tempo Track button is disabled, double-click the tempo, enter a new value and press Return. A fixed tempo can be useful in situations where you might want to rehearse a section of the Project, or if you want to record MIDI parts in at a fixed, slower tempo, rather than worry about playing to a click that might speed up and slow down as part of the expression of the piece.

One important point is that toggling the Tempo Track button has absolutely no effect on the Signature track, so any time signatures you've inserted will remain active. 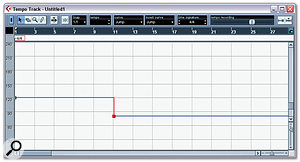 Selecting a Jump curve for a Tempo Event means that the tempo will instantly change to the tempo of the new Tempo Event at the specified position.The Tempo Editor is functionally similar to the other graphical editors in Cubase, such as the Key Editor, and you'll notice that the main Event Display area is split into two parts: a Signature editor that runs along the top, just below the ruler, and a Tempo editor in the main part of the window. There's also a duplicate Activate Tempo Track button (from the transport panel) in the top-left of the window, to toggle the Tempo Track, just like the Activate Project button in the Project window.

Tempo Events are shown as dark blue squares in the Event Display, and you'll notice that a lighter blue line runs through the editor as a reference so you can always see what the current tempo is at any point in the Project. To adjust the starting tempo of the Project, simply drag the first Tempo Event in the editor, and since this is the first Tempo Event you'll only be able to drag it up and down (to affect the tempo) rather than left to right (to affect the time). All other Tempo Event markers can be dragged in either direction.

While you can zoom in and out to make more precise adjustments to the tempo, often it's easier to simply edit a Tempo Event numerically. With a Tempo Event selected (notice how Tempo Events turn red when selected), its value is shown in the 'tempo' field on the Tempo Editor's toolbar, and you can either double-click it to enter a numerical value, or use the arrows to the right of the value to increment or decrement by 1.0 bpm. You can also adjust the tempo of an Event by pressing the up and down cursor keys to increase or decrease the tempo in 0.1 bpm increments.

The Master Sync section of the transport panel shows the current tempo and time signature, and whether the Tempo track is active or not. If you can't see this section, right-click on the transport panel in an empty area and make sure Master Sync is checked.To add a new Tempo Event, simply click with the Draw tool (or Alt/Option-click with the Select tool) at the point in time you want the tempo change to occur — the vertical axis sets the actual tempo of the change. While you don't have to worry about being completely precise here (you can always edit the value later as described above), Cubase provides a couple of tools to help you out.

Firstly, at the top of the tempo scale, to the left of the ruler, is an indicator that shows you the current tempo position of the mouse in the Event Display. And secondly, the Tempo Editor has an independent Snap function that allows you to make sure you place the Tempo Event at the correct point in time. By default, this is set to one bar (1/1), but you can change the value from the snap pop-up menu in the Tempo Editor's toolbar. Annoyingly, it's not possible to adjust the time of the Tempo Event numerically, but you can do this in the Project Browser (see 'The New Mastertrack List Editor' box).

To delete a Tempo Event, select it with the Select tool and hit Backspace or Delete. Alternatively, you could use the Erase tool.

One particularly nice feature in the Tempo Editor is the Tempo Recording fader on the toolbar. When the transport is running (which is to say you're either playing or recording in the Project), dragging the tempo recording fader will create new Tempo Events that speed up or slow down the tempo of the Project as you drag. If you drag to the right the tempo gets faster, and if you drag to the left it gets slower. To make finer adjustments as you move the fader, hold down the Shift key before dragging it.

The Tempo Recording fader in the Tempo Editor allows you to record tempo changes with the mouse while the Project is playing back -- sadly there seems to be no way to assign this fader to a physical fader on a control surface.

As you can imagine, using the tempo recording fader is a great way to add rubato (subtle changes in speed that a performer might impose on the music) to your Project's performance, and can be handy when working to video to add a more musical feel, as it's almost like 'conducting' the sequencer.

Creating and modifying time signatures as Signature Events is pretty similar to working with Tempo Events. To modify a Signature Event, such as the first one in the Project, select it with the Select tool so that a red outline appears around it, and now you can edit the Signature Event in the 'time signature' field on the Tempo Editor's toolbar. You can increment and decrement the numerator by clicking the arrows to the left of the signature, or adjust the denominator with the arrows to right. Alternatively, you can simply double-click the signature, enter a new value, and press Return. 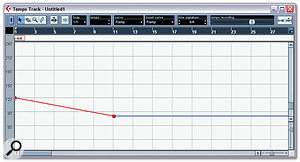 Unlike some operations in Cubase, you can't Alt/Option-drag Tempo or Signature Events to make new copies, although fortunately that doesn't mean you can't copy one or many Events in the Tempo Editor. Instead you have to use Cubase 's clipboard commands, so if you want to copy a section of Tempo Events, for example, simply select the appropriate Events, press Control/Command-C (or select 'Edit / Copy'), set the Project Cursor to the position where you want to copy the first event to, and press Control/Command-V (or select 'Edit / Paste'). This method works for both Signature and Tempo Events, but you have to copy and paste each type of Event in separate operations.

When you want to import and export Tempo tracks (including signatures between different Projects), Cubase provides handy Tempo track import and export commands from the File menu ('File / Import / Tempo Track' and 'File / Export / Tempo track'). One useful purpose for doing this could also be to make copies (or backups) of an existing Tempo track before you want to try something clever, because while there are always multiple undos in Cubase, if you perform major surgery on the Tempo track only to change your mind a week later, it's quite convenient to reload an older Tempo track via these commands.

One thing to note with the Import Tempo Track command is that it completely replaces the existing Tempo track with the one you're importing — it's not possible to import a new Tempo track to the position of the Project Cursor, for example. This means that if you're making a Project that's a composite of many other Projects, you'll need to assemble a master Tempo track by copying and pasting (as described above) from the various different Projects.

That's all we've got space for, but join us next month for more Cubase-type fun 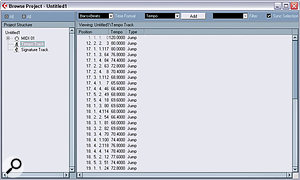 By selecting either the Tempo or Signature track in the Project Structure list, you can edit the appropriate Events in the main part of the browser. With Tempo Events, this provides a way of editing both the position and tempo of a Tempo Event numerically by clicking on the value you want to adjust, entering a new value, and pressing Return. The only parameter of a Tempo Event you can't adjust from the Project Browser is whether it uses a Jump or a Ramp curve.

You can edit both the position and value of Signature Events in the same way by displaying the Signature track in the Project Browser, and this is also quite a useful way of seeing an overview of your time signatures on one page, since reading the list of signatures along the ruler in the Tempo Editor is sometimes less intuitive.