Too Good To M-S 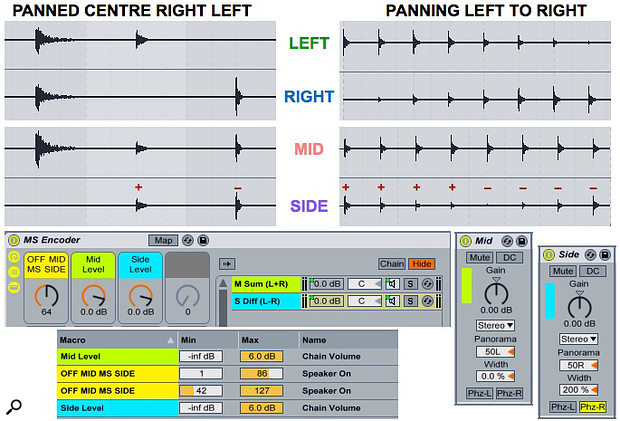 Screen 1: The audio files at the top illustrate two instances of M-S encoding. The M-S Encoder Audio Effects Rack at the bottom uses Utility devices for mid and sides encoding, and you can use a copy of the same Rack for decoding. The red ‘+’ and ‘’ signs indicate polarity in the sides channel.

We investigate the creative potential of Mid-Sides processing in Live.

There’s a lot you can do with Mid-Sides (M-S) processing: correcting or enhancing the stereo image of a track, submix or master is only the beginning of the Mid-Sides story. Applying almost any effect in your kit to either or both channels of an M-S encoded file and then decoding the result back to stereo can breathe new live into your sounds. I’ll start with a look at the encoding and decoding process and then proceed to some of its less shopworn applications. You can find more information on M-S processing in the March 2011 and September 2012 Live columns. You’ll find details on phase manipulation and stereo audio file processing in the Techniques sections of the April 2008 and November 2010 issues of SOS.

M-S encoding turns a standard stereo file into an audio file with separate channels for the sum and difference of the original file’s left and right channels. Another way of describing the mid encoding (the sum) is as a mono mix of the left and right channels. You can think of the sides encoding (the difference) as a mono mix of everything that is panned off-centre in the original stereo file — the further off-centre it is, the louder it will be. In addition, the components of the sides channel that come from the right channel will have inverted polarity. For working in Live (or any DAW), the mid and sides encodings occupy, respectively, the left and right channels of an audio track. Hereafter, I will simply refer to these as the mid and sides channels of M-S encoded files.

Screen 1 illustrates the M-S encoding for two stereo percussion clips. The stereo clip at the top left comprises kick, hi-hat and sidestick hits panned centre, full left and full right respectively. In the M-S encoding directly below, the kick is missing in the sides channel because it is summed with its inversion, and although this is not visually apparent, the sidestick hit is inverted. The stereo clip at the top right has sidestick hits panned from left to right. In the M-S encoding, the summed hits in the mid channel are all the same level, whereas the hits fade out and then back in with inverted polarity in the sides channel.

In the absence of any effects processing or level and panning manipulation, M-S decoding will convert the M-S-encoded files back into the original stereo files. What may not be obvious at first is that the encoding and decoding processes are exactly the same. And Live makes it easy to build an M-S encoder in a two-chain Audio Effects Rack. Simply insert the Utility devices labelled ‘Mid’ and ‘Side’ in screen 1 into the chains labelled ‘M Sum (L+R)’ and ‘S Diff (L-R)’ in the Rack to their left. The Macro knob assignments shown are a convenience for auditioning the mid and sides components separately as well as for adjusting their volume. (Those knobs should be left at the default positions shown when using the Rack for decoding M-S files back to stereo.)

So what can you do now? Well, for starters you can use M-S encoding to alter a stereo image by applying different effects or different effect settings to the mid and sides channels of an M-S encoded file and then decoding it back to stereo. Here’s one way to set this up: on the track holding the clip you want to process, insert two of the M-S Encoder Racks shown in Screen 1 in series, and then use the first Rack’s leftmost Macro knob to audition the mid and sides signals. You’ll hear each in mono coming from both channels. If the sides signal is weak, there will be very little stereo image. Unless there is no sides signal at all, you can use the Mid Level and Side Level knobs to adjust the stereo image to taste. Beyond that, you might insert a reverb with a 50 percent or less dry/wet setting after the Utility device in the M-S Rack’s sides chain for enhanced stereo. Keep in mind that, because of the way summing and panning is corrected for in Live, the clip you start with should peak at -3dB or less, and lowering levels is usually safer than increasing them when using the Mid Level and Side Level knobs. 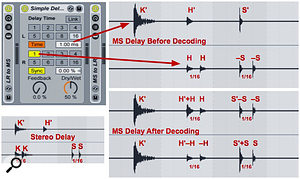 Screen 2: Using the left example from Screen 1, Live’s Simple Delay is applied as a dual-channel effect between the M-S encoder and decoder. K’, H’ and S’ mark one-millisecond-delayed kick, hi-hat and sidestick hits. Notice how applying Simple Delay to a stereo signal (bottom left) differs from the M-S dual-channel processed version. When you insert a stereo process such as Live’s Simple Delay in the mid chain, only its left channel will have any effect. Likewise, when you insert it in the sides chain, only the process’s right channel is used. To process the mid and sides channels with the same stereo effect, insert it between the M-S encoding and decoding Racks as shown in Screen 2.

Although simple audio examples like these using discrete events make clear what’s going on, real-world applications can be a bit trickier. In Screen 2, for example, the phase cancellation caused by summing the one-millisecond-delayed hits with the originals and their inverses might be a bit ear-bending when applied to other instruments or sub-mixes. On the other hand, that may be just what you’re after.

Subtlety rules when using M-S processing as a mixing and mastering tool, but for sound-design, anything goes as long as it works. You can build M-S processing from scratch starting with a couple of M-S encoders, but it’s worth the effort to build and save an Audio Effects Rack holding the encoders as well as empty Racks in places where you might want to place effects. There are four such places (labelled ‘1’ through ‘4’ in Screen 3): before the M-S encoder to modify the stereo image before M-S encoding, in the mid and sides encoder chains for mono processing, and after the M-S encoder for dual-channel processing. You can either add effects devices to those Racks or hot-swap them with Audio Effects Racks from your library. 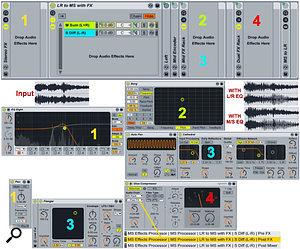 Screen 3: The shell M-S Processing Rack at the top saves a lot of time when setting up M-S effects. In the middle, separate channels of pre-M-S EQ are followed by different mid and sides effects. At bottom, the mod wheel is used to pan a mono signal before M-S processing.Although M-S effects processing requires a stereo image to be useful, you can start with a mono image and ‘stereoise’ it before processing. For example, you might start with a pad or ambient sound with little or no stereo image and then EQ its left and right channels separately before applying M-S effects processing. You can do that with a single EQ Eight by using its built-in L/R or M-S mode. M-S effects processing yields a different result for each of the modes as you can see in Screen 3. Here, Grain Delay is applied to the mid channel while Auto Pan pulses the sides signal in eighth-note triplets, which are then blurred by Reverb.

You can use these techniques with instruments as well as audio clips. Again, you don’t need a stereo image to start with. The example at the bottom of Screen 3 starts out with a Utility device that narrows the instrument’s output to mono (Width set to 0.0 percent) and then maps the MIDI mod wheel to Utility’s Panorama control, allowing you to pan the instrument as you play, which amounts to moving it from side to mid to side. A low-cut EQ followed by Live’s Flanger is inserted in the Side FX Rack and no effect is used in the Mid FX Rack. Experiment with Flanger in both Sync (note icon) and Hz mode, and also try it in the Mid FX Rack. Live’s Glue Compressor is used in the Dual FX Rack. The Post FX sides signal is used for the compressor’s side-chain input so that compression only occurs when the sides signal is present, which is when the mod wheel is not at the middle of its range. Flanging is also only heard when the mod wheel is off-centre — the more off-centre, the more flanging. When working with a panned mono signal like this it is critical that the Mid FX (2) and Sides FX (3) Racks be different; turn them both off and you’ll see that the mod wheel merely pans the sound, as you might expect.