The Elephant In The Control Room

Why Only Subwoofers Can Produce Accurate Low End By Carl Tatz

This frequency–response graph from a monitor system in an award–winning studio prior to optimisation is typical for a pair of monitors mounted on stands behind a console or on a large console meterbridge, though in this case, a somewhat asymmetrical control room is causing the left and right monitor response at around 100Hz to deviate. Note the ‘Grand Canyon’ of missing low–frequency information between the peaks at 125 and 63 Hz in the circled area. This means that monitors tend to deliver ‘one note’ bass, and engineers tend to boost the frequencies in the ‘canyon’ region, leading to bass–heavy mixes.

The geometry of a control room makes it almost impossible to achieve flat bass response from stand–mounted speakers.

One of the most misunderstood subjects in pro audio is control–room nearfield monitoring: the dos and don’ts, the problems and suggested remedies. It’s the low frequencies that are always the biggest issue. Mix engineers are frequently second–guessing decisions about the bass, and will more often than not end up with mixes that either have too much bass when played outside the control room or, occasionally, the opposite. The monitors they are using can often spec out to go down to as low as 40Hz when measured in an anechoic chamber, but as everyone knows, a monitor’s performance will be affected by a combination of room mode and boundary effects, as well as by console and room surface reflections. In spite of all these anomalies, the experienced engineer will eventually ‘learn’ his monitors and produce satisfactory work — but the experience of working in such an environment may still disappoint.

The common advice given to solve this problem is to add acoustic treatment into the room. Bass traps in particular seem to promise the most ‘magic’. Acoustic treatment is critical in control–room design, and is most valuable for attenuating side wall and ceiling first reflections, and to remove any sort of spurious reverberant ambiance. Any sonic information coming back to the listener at the listening position, other than the direct sound from the nearfields, will cancel with the direct sound to produce comb-filtering, making the playback sound ‘far away’ as well as being inaccurate. Rear–wall absorption and corner bass trapping is generally a good idea and, combined with first–reflection treatments, will render a smoothing effect for the control room’s acoustic character. I would offer a word of caution, however, about bass trapping at the front of the room that directly affects the low frequencies at the listening position: without careful evaluation, these nearfield traps can just as easily be destructive as helpful, causing unwanted frequency dips.

Once the control room has been correctly treated, you are ready to set up your monitors again and create the mix of your life. You may notice that the speakers seem more present and the low end might even sound tighter. So you go about your business believing that you’ll finally be able to mix the way you want, having the monitors sound the way you want, not having to second–guess the low end. You proudly take your mix out to the car for a listen — and, lo and behold, you still have way too much bass! How can this be? You begin an acoustic witch–hunt, listing the likely suspects. You used the wrong bass traps. You need more bass traps. You need to move your console and listening position. You need new monitors, and so on. This process may yield some improvements, but ultimately, the engineer will still need to ‘learn’ his or her control monitoring, appreciating its positive features while compensating for its defects by deliberately making the bass sound weak in the control room (or in some instances, too loud), in the knowledge that this will sound right on other systems. 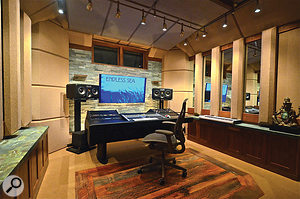 In a typical small–studio control room, the height and position of the monitors means that reflections from floor, ceiling and side walls all arrive at the listening position at similar times, with the resultant comb-filtering causing a dip at around 125Hz. The problem is alleviated in this room in Aspen, Colorado, by Carl Tatz’s PhantomFocus system. The observed phenomenon is as follows (cue for the acoustic animal trainer to lead the elephant into the control room). In a personal home–studio–sized control room, nearfield or mid–field monitors are usually mounted on speaker stands behind a desk or atop the meterbridge of a large–format console at tweeter/listener ear height, which is typically 48–50 inches (122–127 cm) above the floor. The overwhelming majority of the time, this configuration leads to a low–frequency acoustic cancellation due to the interaction of the floor, front wall, ceiling, console and listening position, creating a dip in the neighbourhood of 125Hz, give or take 25Hz. (Similar interactions occur in large commercial control rooms, but the dip is usually closer to 60Hz, and is less severe.)

In the extreme — but not that uncommon — case, if the boundaries of your listening position, speaker position and perhaps even the front, side and ceiling wall distances are all in this approximate 50–inch range, you will necessarily experience the cancellation dip in this frequency range even more strongly, since you will be hearing the direct sound combined with the delayed information off all of these surfaces. Often it’s not just a dip: a wide canyon is routinely measured, often from 10dB to 15dB deep. Depending on the speakers and the particular room, the low–end response will usually also feature a peak somewhere in the 30 to 60 Hz range, which will vary in amplitude.

Questions From The Floor

From personal experience, I believe that the biggest culprit is the floor bounce. Out of necessity, we’ve installed systems with the speakers almost up against the front wall and also at five or six feet from the front wall, yet the results are similar because the height of the speakers above the floor remains relatively constant. Low frequencies are not directional and will travel around and below a console to mix with the direct signal at the listening position. Yes, you could somehow design some sort of monolithic custom–shaped speaker plenum that might attenuate the dip; I don’t know exactly what that would be, but it would be very impractical. I recall once using 12–inch ASC Tube Traps as speaker stands, but they did not alleviate the problem. 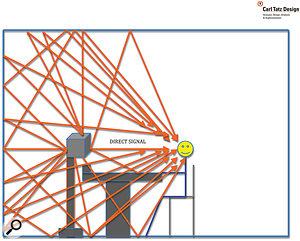 The arrows indicating the boundary reflection/cancellations in these two drawings may seem familiar, with one exception: unlike higher-frequency reflections, where the angle of incidence equals the angle of reflection generated from the baffle of the monitor, low frequencies are not directional. They emanate from all over the monitor, and respond to the boundaries of the control room relative to the listening position in an enveloping way, as well as to the axial modal behaviour of the room. You can imagine an infinite amount of arrows here! 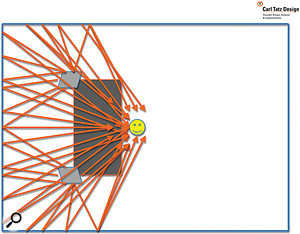 What this means is that you are making your mix decisions in a low–frequency ‘Grand Canyon’ which runs from approximately 125Hz or higher down to maybe 60Hz. With the setup described above, which is very typical, there have been no exceptions to this phenomenon. So if you’re thinking ‘not my speakers’, you will be sadly mistaken.

As part of my lectures at various audio events and educational functions, I am able to present over 20 randomly chosen frequency graphs from the great many monitors in various rooms we have tuned. Some graphs show the same monitor in different rooms, and every one demonstrates this phenomenon. To reiterate, there are no exceptions to this. You might even think that you have pretty good bass, and you might — at a specific low–frequency peak. But there’s a huge amount of missing bass information between that peak and 125 or 150 Hz.

You needn’t take my word for this. If you have the ability to make your own frequency response measurement at the listening position, you will see for yourself. And this is why engineers have such a difficult time mixing the low end. Think about it for a moment: if the track you are working on is in the key of that Grand Canyon, you instinctively will want to push up the bass, yet when you take it out to the car, all hell will break loose. Conversely, if the track’s root note is in the 60Hz (or 40, 50, 70...) peak region, the opposite may occur, depending on the peak’s amplitude.

So how do you tackle this problem? No amount of bass trapping or other acoustic treatment is ever going to satisfactorily attenuate a wide 15dB dip, and if you tried to EQ it away, you wouldn’t be able to turn your monitors up past 45dB without blowing the woofers. Soffit–mounting your monitors would alleviate the issue, but would make it difficult to position nearfield monitors properly relative to the listening position. So what’s the answer? (Drum roll as the acoustic animal trainer leads the elephant back out of the control room.)

Yes, subwoofers. Properly positioned — and two are always better than one for phase–correcting axial modes — they will begin to fill in your Grand Canyon of missing bass information. This is the only way the canyon can be filled, and no room is too small for this to work. Positioning is key to attain the best results, but it is a subject too expansive to thoroughly cover here. Without powerful analysis software and digital processing, perfection will be elusive. However, great improvement can be yours if you are diligent in your approach. Front–corner subwoofer positioning will offer the largest piece of clay to work with as you experiment with the high– and low–pass crossovers, frequency settings and subwoofer volume. A subwoofer placed in each front corner will also attenuate the first and third axial–width mode null at the listening position.

By the way, you can ignore those who profess not to corner–load the subs because it excites all the room modes. It does. And who cares? All you should be concerned about is the listening position; to hell with the rest of the room. This is as true in a bedroom as it is in a well–designed commercial studio control room. You don’t tune a room: you tune the monitors. There is only one position that can be accurate and that’s your position in front of the monitors. The laws of physics dictate this, not me. (For listener/monitor positioning see the Null Positioning Ensemble at www.carltatzdesign.com/acoustic-tools.html.) A next step would be to take advantage of DSP room correction systems such as those supplied with some Genelec and Dynaudio monitors, or third–party units, that could greatly help fill in the canyon and smooth your monitor’s frequency response in the room.

Carl Tatz’s studio design consultancy has developed a bespoke monitor tuning protocol which addresses the problem described in this article, among others. For more details, see www.carltatzdesign.com/phantomFocus-system.html.