Knowing where OS X stores important files, such as plug-ins and musically-related drivers, can often be vital when dealing with a misbehaving Mac. This month we go on an expedition through the domains of the OS X filing system - so make sure you're dressed appropriately... 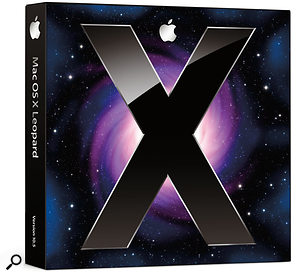 Knowing your way around the inner workings of Mac OS X can be invaluable when troubleshooting.In general, Macs deservedly enjoy a reputation for being easy to use; and, for the most part, you really don't have to worry that much about understanding the Mac operating system in order to install a music or audio application and embark on a creative odyssey. However, as with any tool, a little knowledge is often handy when technology doesn't quite behave as expected. Part of the battle when trying to cure a system ailment is often a simple matter of knowing where to look.

Life with OS X is far easier than in the days of the 'classic' Mac operating system, but it's still useful to know your way around its filing landscape. While it's often hard to believe, preferences can become corrupt and require deleting, plug-ins you might download from the Internet often have to be installed manually, and where exactly do your MIDI and audio drivers end up? This month's Apple Notes aims to uncover these mysteries.

Master Of Your Domain

One of the most important things to remember when looking at the OS X filing system, which stores system files, applications, your data and so on, is that it consists of a number of domains. For our purposes, the two most important of these to consider are the User domain, which is where files that are specific to an individual are stored, and the Local domain, where files that are available to all users live.

An example of the User domain would be your Home folder, which is the folder named after the user name you entered when installing or registering Mac OS X. The Home folder is where you'll find a collection of folders such as Desktop (where the files from your desktop are stored), Documents, Music, Movies, and so on. And because the Home folder is in the User domain, each user you create on your Mac will get their own Home folder, so that when you log in to the Mac you always see your Desktop files, documents, music and movies.

By contrast, an example of the Local domain would be the Applications folder. No matter which user is logged into the Mac, they always have access to the same applications, and this means that an application only has to be installed once to be available to all users.

The User domain's Library folder is stored, as you might expect, in a user's Home folder, while the Local domain's Library folder is stored at the root level of your Mac's boot drive. You may have noticed that the System folder on your Mac also contains a Library folder. This is because the System folder represents another domain called the System domain. However, the System domain should usually be considered absolutely off-limits. Still, it's worth a moment's consideration, because the System Library Extensions folder is where you'll find the kernel extensions that are the audio drivers for your interfaces, although you really need to know what you're doing before tampering with these files — only change them as a last resort.

As you might imagine, having a number of Library folders on your Mac that perform nearly identical purposes has the potential to become quite confusing. However, if you keep in mind that a resource put in a User Library folder will only be available to that particular user, and that a resource put in the Local Library folder will be available to all users, it's usually pretty easy to figure out where something might be stored, or where the most appropriate place for an item will be.

This situation of multiple Library folders is perhaps the most confusing on Macs where there is only one user, which, I'm guessing, will probably be the majority of people reading this column. This is because the roles of the User and Local Library folders become almost indistinguishable, although it's still worth enforcing the distinction in case you ever do need to add another user account to your Mac.

Perhaps the most relevant folder in the Library for those running music and audio software is the Audio folder. Despite the name, this folder is also used for files pertaining to your Mac's MIDI configuration, such as the MIDI Drivers folder, where the drivers are installed that allow Core MIDI (and the music applications that support Core MIDI) to communicate with the MIDI devices attached to your Mac. Given that you would normally want such MIDI devices to be available to any user on your Mac, MIDI drivers almost always get installed into the Local Library folder. 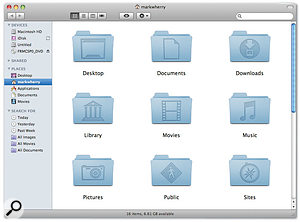 The Home folder on your Mac is unique for every user account on that Mac, and contains an all-important Library folder where applications will store user-specific applications and content.Another important destination within the Audio folder is the Plug-ins folder, which, as you can imagine, is where plug-in instruments and effects are installed. Inside the Plug-ins folder are a number of subfolders for the different formats of plug-ins, and each subfolder is usually named after the format of plug-ins it contains, with the exception of Audio Units, which go in the Components subfolder. So if you download a plug-in from the Internet and the archive contains only the plug-in (without an installer application), you can install it by simply dragging the file (along with any support files) into the appropriate folder. Audio Units go into the Components folder, VST plug-ins go into the VST folder, and so on. And, like MIDI drivers, plug-ins are usually installed into the Local Library folder as, again, you would normally want all users on the Mac to have access.

The only exception where plug-ins are concerned is if you use Pro Tools, in which case RTAS and TDM plug-ins are normally found in the Plug-ins folder located in the Application Support / Digidesign folder inside the Local Library.

Standard OS X preferences files are stored as property lists (which literally means a list of properties), which is why they have the file extension '.plist'. The filenames of these property list files are usually expressed hierarchically, starting with 'com.' and followed by the company, application, and any other categorisation. For example, the preference file for Logic Pro is named 'com.apple.logic.pro.plist', and this standard naming makes it fairly easy to find the preferences to what you're looking for.

As with everything in life, however, there are exceptions. Not every application stores preferences as property lists, and quite often you'll notice files — or even folders — of preferences specific to an application that merely uses the preferences location rather than the convention. Pro Tools, again, is an example of this where you'll find a DAE Prefs folder in the User Library Preferences, in addition to a Pro Tools preference file.

For Pro Tools users, it's worth pointing out that there's a really nifty utility available from www.jcdeshaies.com called 'Pro Tools Prefs & Database Helper.' While the name might not seem very exotic, this tool is indispensable for situations where you need to back up or remove preferences associated with the Pro Tools application and Digidesign's hardware.

The other Library folder that's worth knowing about is called Application Support, and this contains a number of subfolders named after the companies who created the applications you've installed, or the applications themselves. An Application Support folder is usually the place where various non-critical ancillary files are stored, and in the case of music and audio software, this might be content like application-specific presets for instruments and effects.

What gets stored in an Application Support folder varies for different applications, so it's worth spending a little time getting to know where your main applications store user-created content. This is important for making sure you have work backed up properly, and also if you want to share content with other Macs.

Looking Inside An Application 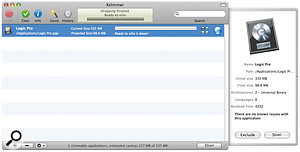 Xslimmer is ready to slim Logic Pro from a bulky 335MB to a trim 98.6MB. If you need the extra space, it may be worth considering. There are applications like Xslimmer (www.xslimmer.com) that claim to reduce the file size of an application. The way they work is to basically remove files you don't need from an application's bundle. An easy example of such redundancy is where you have an international application that might have multiple user interface translations for various other languages in its bundle. If you've installed an application on an English version of Mac OS X, the chances that you'll ever need the additional translations are, well, pretty slim, and thus you can save space by deleting them. However, I wouldn't recommend looking inside an application's bundle (which you can do by Control-clicking an application file and selecting Show Package Contents from the pop-up menu) and manually deleting files that you deem unnecessary, as you could easily end up with applications that no longer run.