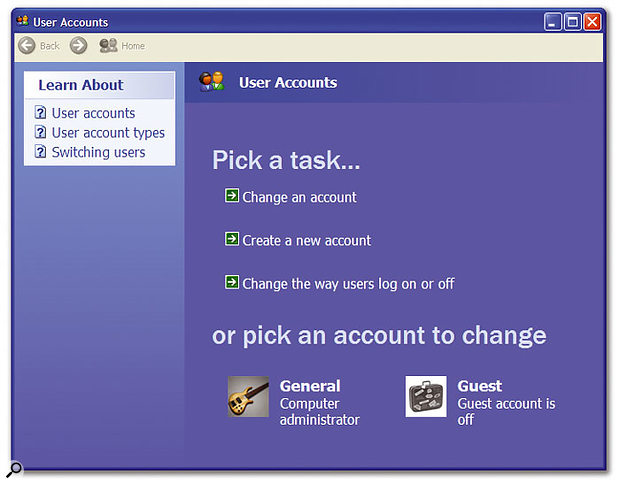 While you may only have a single user account (as shown here), its settings and, more importantly, the contents of its associated folder, may be very important to you as a musician.

We explore the relevance of user accounts and the vital contents of the Windows Documents and Settings folder.

I don't know about you, but I've never personally needed to create multiple accounts or use passwords on my PCs — I just have the single account that was created when I first installed Windows XP. This has Administrator status, so that I have total system control over my PC. However, if you wish, you can create other accounts with more limited status, so that other people can use the PC but not accidentally trash it. By default there's also a Guest account with even fewer powers, so that your friends can go on-line to receive emails, and so on, without you worrying about security.

I discussed the pros and cons of multi-user accounts for the musician back in the PC Notes column of SOS March 2003, and came to the conclusion that while they're helpful in many instances, they're not suitable for creating several setups optimised for different uses, such as Games, Music and Internet. This is because although each account has its own Start menu, colour scheme, O/S tweaks and so on, the applications themselves are installed in a vast Program Files folder, references to them are stored in one big Registry, and any virus contracted from the Internet can immediately infect the entire system.

For me, the beauty of a multi-boot PC is that each Windows installation is housed in its own self-contained partition, with its own slimmed-down set of installed applications and more compact registry. Even if the worst happens and your Internet-enabled partition falls over, the likelihood of your music partition being affected is minimal, and zero if you use a boot-manager utility such as Bootstar, that makes Windows partitions invisible when they're not active, or have multiple drive caddies so that your music drive isn't even plugged in when you're accessing the Internet.

If, like me and many other musicians, you're the sole user of your PC and you don't employ passwords and multi-user accounts, you don't have to log on manually each time you boot up your PC.

Following the steps in this checklist will ensure that Windows takes you straight to the desktop every time you boot:

Having said all the above, I'm sure that some of you have PCs with multi-user accounts that are used by all the family, and in this scenario separate accounts do offer some extra security for your music applications.

If your PC does have multiple users, one related 'music tweak' worth implementing is disabling Fast User Switching: select User Accounts in Control Panel, click on 'Change the way users log on or off', un-tick the box marked 'Use Fast User Switching', then click the Apply Options button. While being able to switch rapidly from one account to another without having to close any programs can save time, it can consume lots of resources that are better made available to audio applications.

Every time a user logs on to a Windows XP computer, Windows automatically creates a profile for that user, unless one already exists, and these profiles are stored in the 'Documents and Settings' folder. Each profile contains that user's documents, plus any application settings specific to that user, such as their desktop arrangement, Internet favourites list and cookies, Start Menu contents and arrangement.

Personally, I've never stored any of my documents, music or other multimedia data in the Windows-designated 'My' folders ('My Movies', 'My Music', and so on). While such folders are obviously convenient for those whose hard drives comprise one large partition, and especially when lots of people use the same PC, I'd much rather have all my data on another partition, or preferably another drive, where it can not only be accessed by each of my different Windows installs, but also be more easily backed up to CD or DVD for safety.

The Start menu includes the common program groups that are installed by Windows and appear for all users, such as Programs, Accessories, Multimedia and so on. I always find it difficult to find specific applications on other people's PCs, because they tend to accept the install defaults and end up with one big list, whereas all my PCs have additional folders, with names such as Audio Editors, Audio Utilities, Plug-ins and Soft Synths, which makes it much quicker and easier to find whatever I'm looking for. However, while it's easy to drag and drop existing shortcuts to rearrange them on your Start Menu, to add new folders you need to know where they are stored inside the 'Documents and Settings' folder.

Inside this folder, most users will probably find a selection of sub-folders, called Administrator, All Users, Default User, Local Service and Network Service, plus one with whatever user name you typed in when first installing Windows, and any other account names you've created for other users. Only accounts with Administrator status can change common program groups, while — as its name suggests — All Users contains all the settings common to each account. Every new account you create is initially a copy of Default User, while Local Service and Network Service both provide extra security, by running various Windows Services with non-Administrator status.

Most people will find that the vast majority of their personal data only appears in the All Users and 'own name' account, and if you're the sole user of your PC it makes little practical difference which one is used. When you install software, you may be given the option to 'Install shortcuts for current user only' or 'Make shortcuts available to all users'. This option defines in which of the two folders mentioned above they are saved. Similarly, when you uninstall any application whose info has been placed in the All Users folder, you may get a warning message something like: 'This will affect all users. OK to proceed?'

Although you can navigate to the current user's account files by hand via Windows Explorer, here's a really quick shortcut: using the Start Menu's 'Run' command (most quickly accessed using the Windows-R shortcut), simply type in '.' (a single period character) and press return, and the current user's folders will appear inside a new Explorer window so that you can explore or modify them.

You can now click on the Start Menu folder, for example, and add new folders to the Start Menu using the normal right-click New Folder option, or click on 'Send To' and add new shortcuts to your Send To options using 'New Shortcut' (as an example, I've added a shortcut to Notepad, so that I can explore the contents of any file in Explorer).

Even if you've never stored a single document in your account's 'My Documents' folder, you'll find a set of tiny files, your desktop 'themes', stored here by default, and you should back these up for safety. If you've spent a long time choosing colours, font sizes and so on, in order to cram the maximum number of audio tracks on to your sequencer screen and make it as legible as possible, it would be pretty annoying to have to go through the process again should you ever need to reinstall Windows.

Your Internet Favorites (sic) are also stored here, but possibly the most important folder is the one named Application Data. Some applications use this folder to store all your personal presets and user library data. For instance, on my PC the 'C:\Documents and Settings\General\Application Data' folder contains the entire settings collection for Cubase SX, complete with all patch names, presets for the MIDI effects, Logical Editor, Micro Tunings and so on. This is where you should place any patch-name scripts that you create or download (a common cause of confusion for Cubase users). And if you create any new presets that fall into any of these categories, this is where they will be stored.

Other vital files in the Application Data folder that I've found on my PC are the current database files for my AAS Tassman, Lounge Lizard and String Studio synths, containing not only the factory-installed presets but every one that I've created myself and those I've downloaded from the AAS web site over the years. NI's Reaktor 5 also stores its User Content here by default, although I've amended its Preference settings to point to another drive. My Emu 1820M interface also stores the current Patchmix DSP Session here, so that it always appears exactly as I last used it, while my word processor stores its default document template here.

To sum up, whether you're the sole user of your PC or have lots of different account users, the Documents and Settings folder may contain a host of vital files that took you a lot of time to create but are not saved elsewhere. It's important to back these up by copying the files onto another partition, drive or CD-R/DVD-R disk, so that if you ever have to change your hard drive or reinstall Windows after a re-format, you won't lose them.