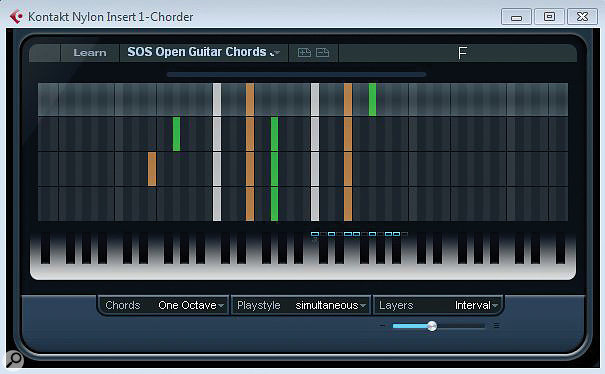 Chorder configured for open chord voicings on a guitar: the notes used in the four layers for the C-major chord are shown.

We show you how to coax a more convincing performance from your VST instruments using Cubases Chorder plug-in.

Even with high‑quality sampled instruments, a good deal of skill is required to create realistic performances. For chord parts, one of the key issues is ensuring that the voicing of the chord (the number of notes used to construct the chord) reflects that used on the actual acoustic instrument. While a C-major chord will consist of the notes C, E and G on any instrument, the way each chord falls under the hand on a piano can be different from the way it's constructed on a guitar, or an orchestral string section. Thankfully, Cubase's Chorder MIDI plug‑in can help with such voicings, even if (like me) your keyboard skills are somewhat limited. By way of example, I'll show you how Chorder can be used to create more realistic chord voicing for guitar and string‑based instruments.

Chorder allows you to assign any combination of notes to a single MIDI note, so the whole chord can be triggered with one finger. Programming Chorder with all the chords in your song makes it very easy to play complex progressions. The basic mechanics of the plug‑in are explained in Cubase's Plug‑In Reference PDF, so for Chorder newbies I'll simply outline the key points here. 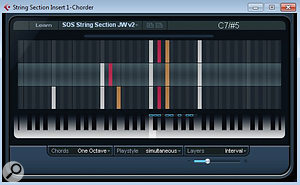 A similar configuration for orchestral strings, with 'dense', 'open' and 'narrow' C-major chord voicing defined in the three layers.There are three modes: All Keys, One Octave and Global Key. The All Keys mode allows you to to define a different chord for each key, while Global Key mode allocates a single chord to one key and replicates it at different pitches for all other keys. Sitting between them, One Octave mode allows you to define chords for the 12 keys of a single octave: Chorder automatically pitch‑shifts the same chords for every other octave.

In some cases, this basic functionality might be all that's required, but Chorder also includes 'layers', allowing definition of up to eight different chords for each trigger note. During a performance, the required layer can be triggered either via velocity or what's known as 'interval' mode, which requires two keys to be pressed to generate a single chord. The lower of the two keys is the trigger note, while the upper key controls which layer is played. For example, if our lower key was a C, playing C# as our second key would force the chord in layer one of the C key to be played, D would play layer two, D# layer three and so on. The sound is only generated when the second key is pressed. This takes a little getting used to, but it opens the door to a wealth of options.

Chorder comes with a small number of guitar‑based presets, but they're somewhat limited. However, a DIY configuration I regularly use programs all the 'open' chords (the non‑barre chords in position one of the guitar neck) for the key of my song into layer one of Chorder, with layers two and three containing first and second inversions of those chords, and a basic barre-chord in layer 4. As a full example, the table on the opposite page summarises all the notes that might be required if my song was in the key of C and was only based around a sub‑set of the standard chords (C, Dm, Em, F, G and Am) for that key. Note that I've included a Bb chord (the bVII chord) rather than the more musically correct, but rarely used, Bdim chord (the VII chord). For the various inversions, I've used the simplest forms possible on a guitar that are closest to the open position. You can, of course, adjust your chord set in whichever way your song requires, to accommodate more creative chord combinations or key changes.

I've configured Chorder to use One Octave mode and to employ Interval mode to switch between these layers (the number of layers can be adjusted by the slider that appears under the Layers pop‑up when either Interval or Velocity modes are selected). So that you can hear the difference between the standard 'piano' voicing of these chords and these Chorder‑generated, more authentic, 'guitar' voicings, there is an audio demo on the SOS web site (at /sos/apr10/articles/cubastechmedia.htm). While the piano voicings sound fine, the guitar‑based ones create a greater sense of realism. A Chorder preset XML file containing the chord voicings used in this example is available for download from the same page.

This column is not the place for a detailed discussion of the finer points of sample‑based orchestral arranging (if interested, see Paul Gilreath's excellent book The Guide To MIDI Orchestration). However, one concept worth considering is what makes a 'good' orchestral chord voicing. While this is, in part, down to the instrument combinations and the specific notes used, which of those notes are doubled and how spread out or bunched the note range is will all influence the final character of the timbre. A simple rule of thumb is to more frequently double the root and 5th notes within the chord, while placing less emphasis on the 3rd or 'colour' note (such as a 7th or 9th if the chord is not a simple major or minor chord).

As most orchestral instruments play a single note at a time, chords have to be constructed across several instruments, either within the same section (for example, the various strings) or across the sections. Given the pitch range of the string section or full orchestra, chords often spread over several octaves, and Chorder can provide a useful starting point when initially laying out parts. As an example, let's consider a full string section. As illustrated in the screenshot, I've constructed a Chorder preset, again around the basic chords for the key of C. This example uses three layers and, like the guitar example used earlier, the same chord is voiced differently in each layer. However, rather than chord inversions, I've provided dense (lots of notes over a wide range), more open (fewer notes but also with quite a wide range) and narrow (fewer notes and narrower range) voicings respectively. You can, of course, add further variations to these, and if you want to introduce 7th, 9th or other chord types, simply adapt what's here.

Having created the basic Chorder preset, you can perform your basic chord sequence, switching between chords and voicings as required. This two‑fingered playing can be recorded just like any other MIDI performance. If you're happy to use a generic 'full string section' sample patch, this might be all that's required. However, if you then want to assign your different notes to particular string instruments (bass, cello, viola, first and second violins, for example), a couple of extra steps are required.

The Merge MIDI In Loop function has converted the two-fingered Chorder part (on the left) into the full note output (on the right).

The first step requires you to convert the notes used to trigger Chorder into the MIDI notes generated by Chorder's ouput. This can be achieved via the Merge MIDI In Loop function. If you solo the Chorder MIDI track and then set the Left and Right locators around this part, the MIDI/Merge MIDI In Loop menu option will bring up a small dialogue box. After you tick the 'Include Inserts' and 'Erase Destination' options, Cubase will replace the existing MIDI part (the notes used to trigger Chorder) with the actual notes created by Chorder. Very neat!

The second step simply involves copying the new MIDI part to a series of MIDI tracks linked to your various sampled string instruments. Each of these parts can then be edited so that each instrument is responsible for just part of the chord. I find the easiest way to do this is simply to mute notes I don't want a particular instrument to play. For example, I might mute all the higher notes in the chord for the bass or cello parts, leaving these instruments to support the bottom end of the chord, as they tend to do in a real orchestra. By muting, rather than deleting, you can tinker with the selections until you get the balance that you want. As with the guitar example above, a Chorder preset and an audio example of its use with a string patch have been placed on the SOS web site.

It's all too easy to overlook some of the humble MIDI plug‑ins included in Cubase. In the case of Chorder, whether you need something to compensate for less than spectacular keyboard skills or, as here, to make the creation of some realistic chord voicings more straightforward, this little plug‑in is well worth exploring.